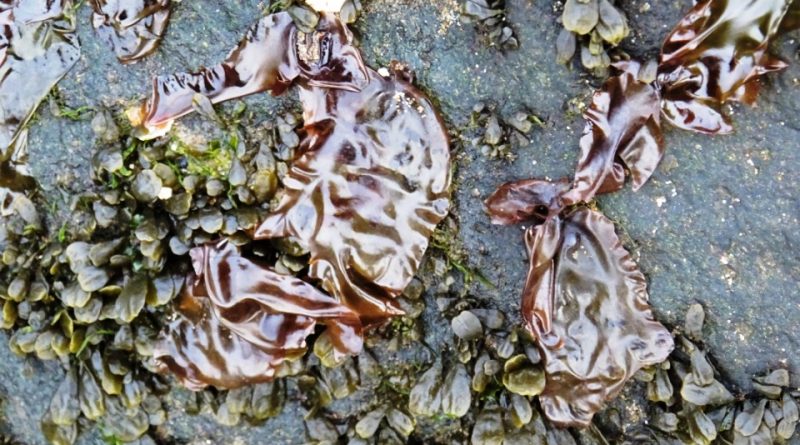 The nori seaweed (Porphyra umbilicalis Kützing, 1843) is a red seaweed belonging to the Bangiaceae family.

Geographic Distribution and Habitat –
Porphyra umbilicalis is a red algae that has spread to all oceans and seas.
It is a species with a very varied habitat as it adapts to the most diverse conditions in different parts of the rocky coast and is able to withstand prolonged periods of exposure to the air, as well as tolerating a greater degree of wave action than most of the other red algae.
It develops singly or in dense colonies along the entire intertidal belt but more frequently at the higher levels. 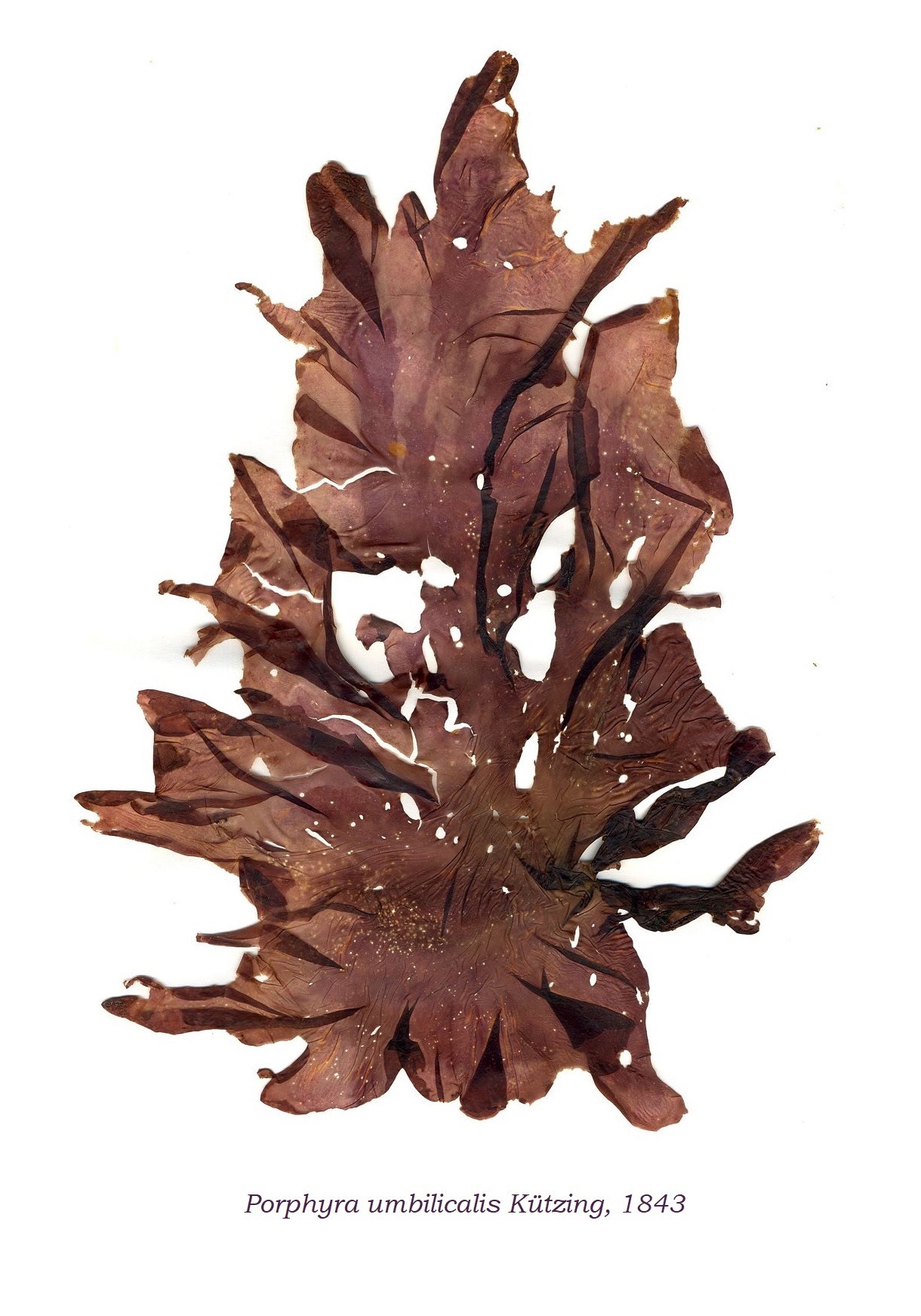 Description –
Porphyra umbilicalis is a small red alga that has a broad and irregularly shaped frond, membranous but robust.
It consists of fine lanceolate or elliptical leaves of a purplish-red color up to about 60 cm long.
The plant attaches itself to the rock through a minute discoidal fixing, it is greenish when young becoming purple red.

Cultivation –
Porphyra umbilicalis is grown commercially in some bays in Japan, Korea and Taiwan, such as Ise Bay.
It is grown on the muddy bottoms of the bays along the coast where bamboo canes are set up to form trellises in early autumn. The spores grown on the beach in special containers are transferred to floating rope nets suspended between reeds in the water. The best growth is achieved by placing the nets at a height that they can escape from the water at low tide and to be able to catch sunlight and be submerged below the water level at high tide. During the winter, once they have matured, they are harvested by hand or with a suction pump, then they are washed and chopped, reduced to a pulp which is poured into squares placed on bamboo mats. The excess liquid drips off and the algae are dried either in the sun outdoors or indoors in large ovens. The sheets thus obtained are then detached from the mats, folded and packaged.

Customs and Traditions –
Porphyra umbilicalis is an alga known with various names depending on the place where it grows or is cultivated. It is known as Nori, Laver or aonori (ア オ ノ リ; 青海 苔) in Japan, sea cabbage (海 白菜) in China, and parae (파래) in Korean.
In Hawaii, it is considered a great delicacy and is called Limu luau “.
This alga is widely used in both food and medicine.
In the food sector it is widely used in Japan where it is used in its dried form for Japanese soups, tempura and other preparations for the production of dried nori, tsukudani and rice. It is also used in powder form, often mixed with Ulva species as its production is limited.
It is commonly used to flavor some Japanese foods, usually by sprinkling the powder on hot food, for its aroma and used in the following dishes:
– Fried noodles (yakisoba or yakiudon);
– Okonomiyaki (Japanese pancake);
– Takoyaki (octopus meatball);
– Isobe age;
– Isobe mochi;
– Shichimi (seven-spice seasoning);
– Japanese fries;
– Misoshiru;
– Etc..
In Korea, it is eaten as a namul vegetable. It is also used to make gim (dried leaves).
It is also a food suitable for celiac subjects as it is gluten-free.
In the medical field it is widely used.
In fact, there are numerous benefits for those who take this alga due to its particular composition, linked to the abundant presence of nutrients that are friendly to health (including, Selenium, Betacarotene, Carotenoids, Antioxidants, Phicoerythrin, Porphyran, Alginates, Iron and fatty acids Polyunsaturated Omega 3, EPA and DHA.
This alga contains the highest level of polyunsaturated fatty acids with 20 carbon atoms and in particular eicosapanthenic acid (EPA) (C20: 5 ω3) and arachidonic acid (C20: 4 ω6). Docosahexaenoic acid (DHA) (22: 6 ω3), Gamma Linoleic and alphalinolenic are also present.
Porphyra umbilicalis is particularly useful for those who practice sports at both an amateur and competitive level as modern training methods involve intense sessions that put a strain on the body of an athlete, with the production of different types of toxins during muscle work. Following intense exercise, the muscle produces inflammatory substances, such as, for example, interleukin-6, the increase of which is over 100 times after an intense training session. Omega 3 polyunsaturated fatty acids are able to reduce the production of interleukin-6 and increase the levels of other substances (prostaglandins of the 1 series) with anti-inflammatory effects.
Moreover, thanks to the richness of Omega 3 fatty acids, DHA (Docosahexaenoic acid) and EPA (Eicosapentaenoic acid), it offers various benefits, supports brain activity against aging and a valid support for intellectual activity. Mineral salts, trace elements, vitamins and amino acids help regenerate neuronal activity and improve concentration and cognitive abilities.
This red alga, in general, has a high protein content and low in fat. Known for its richness in mineral salts, trace elements and Vitamin A (Betacarotene), Vitamins of the B group, in particular Vitamin B12, it contains between 32.3 – 77.6 μg per 100 grams. The Vitamin C content is higher than that of oranges. The vitamin A content is comparable to that of spinach.
It also contains Betaine, among other components, which contributes to reducing the cardiovascular risk associated with high plasma levels of homocysteine, typical of those who follow a diet rich in meat and low in seasonal vegetables.
Among the minerals it also contains a relatively high amount of trace elements, in particular Zinc, which is essential for the functions of some enzymes. Contains Manganese, Copper and Selenium essential for the body’s metabolic processes.

Preparation Method –
Porphyra umbilicalis can be purchased at oriental Japanese food stores and health food stores.
It is sold dry and packaged in sheets. In the Far East it is easy to find it in other forms as well.
The sheets already toasted and cut are called sushi nori or kizami nori.
There are also flakes (fu-nori) on the market which are very tender and delicate, do not require cooking and are good in soups, salads, and dishes dressed with vinegar.
This seaweed is suitable for the preparation of Sushi Maki with the classic rolled shape. With Sushinori leaflets and a little imagination in the kitchen, you can create original aperitifs. Nori can also be used in salads or to prepare fish and vegetable broths and recipes. In Japan it is also eaten as a snack.
In the East and especially in Japan it is consumed daily, even by children who like it simply to nibble because it has a pleasant taste and nourishes. The seaweed is suitable for the preparation of maki with the classic rolled shape. With the sheets of nori you can create a series of aperitifs: just cut the sheet into small squares and fold the sides to form small baskets to be filled with olives, artichokes, mushrooms, parmesan, paté, pickles, vegetables, eggs, tuna, bottarga , caviar, mayonnaise, sauces.
It is also a useful ingredient for the preparation of body and hair cosmetics. Seaweed packs are on the market that help prevent hair loss, effectively fight dandruff and oily skin, have a detoxifying, moisturizing action and can also help fight cellulite.
The purchased seaweed must be stored in a container indoors.
For medicinal use, however, it is sold in tablet form, which is the most convenient and quick way to take it. A few grams of Porphyra umbilicalis per day improve well-being and increase energy.