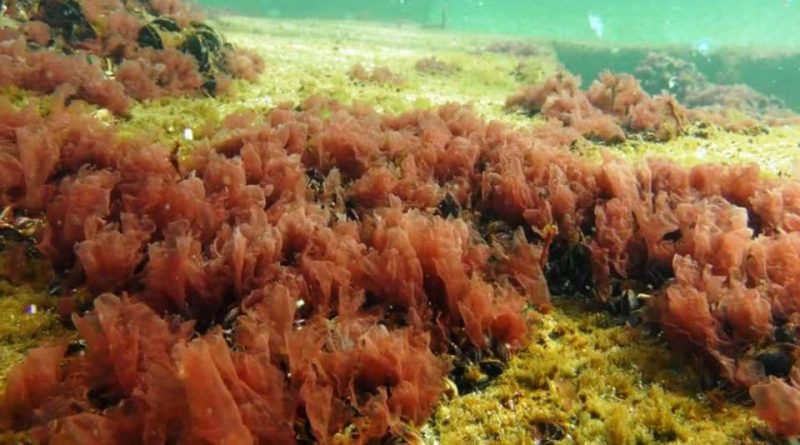 Etymology –
The term Neopyropia comes from the two terms νεο, in turn derived from the Greek νέος “new” and from pyropia in reference to another species of alga.
It is specific tenera epithet comes from tenera, delicate, soft, soft tenuis.

Geographic Distribution and Habitat –
Neopyropia tenera is present in various seas; it is found mainly in Asia (China, Korea and Japan) but is also present in Africa, on the coast of Mauritius, and in South America, near the coasts of Peru. 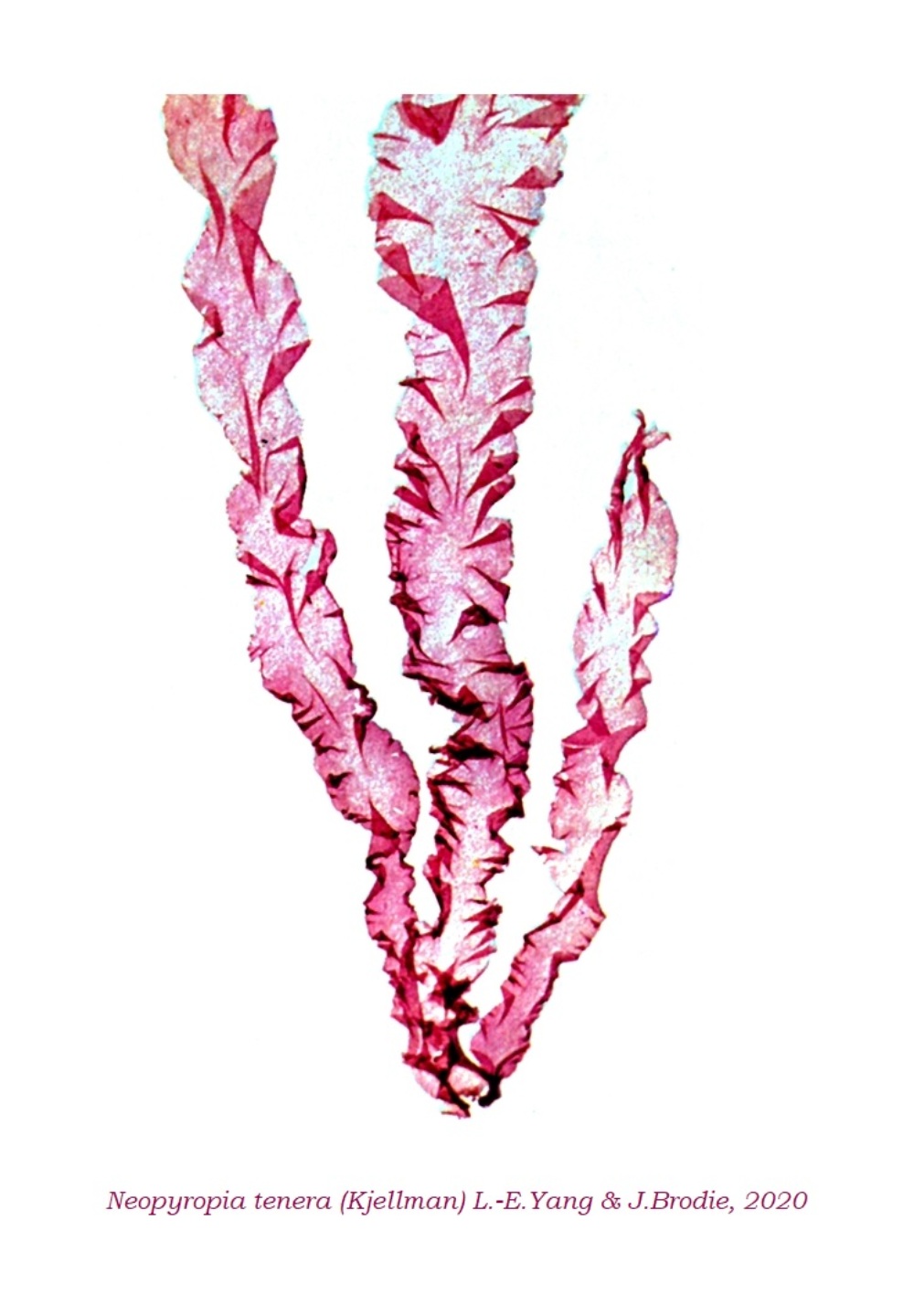 Description –
Neopyropia tenera is a small red algae that generally grows to lengths between 20 and 50 cm.
It has an unbranched uniseriate or multiseriate filamentous thallus, sometimes foliate with intercalary growth. with
Reproduction is sexual and takes place through oogametes without flagella (spermazi and oospheres). The spermazi originate in the antheridia; the oosphere is contained in the carpogonium, equipped with an appendix (trichogyne) intended for contact with the male gametes. The carpospores, diploid spores that germinate produce a thallus called monosporophyte, almost immediately originate from the fertilization of the zygote. The monosporophyte has sporangia which by meiosis produce monospores, haploid spores, from whose germination the gametophyte originates.
The biological cycle of this alga is aplodiplonte.

Cultivation –
Nori seaweed is grown mainly in Asian countries such as China and Japan.
It is grown on the muddy bottoms of the bays along the coast where bamboo canes are set up to form trellises in early autumn. The spores grown on the beach in special containers are transferred to floating rope nets suspended between reeds in the water. The best growth is achieved by placing the nets at a height that they can escape from the water at low tide and to be able to catch sunlight and be submerged below the water level at high tide. During the winter, once they have matured, they are harvested by hand or with a suction pump, then they are washed and chopped, reduced to a pulp which is poured into squares placed on bamboo mats. The excess liquid drips off and the algae are dried either in the sun outdoors or indoors in large ovens. The sheets thus obtained are then detached from the mats, folded and packaged.

Customs and Traditions –
The nori seaweed takes different names depending on the place where it is used. In Korea it is called 참김, Chamgim, or ア サ ク サ ノ リ, Asakusa nori in Japan.
This seaweed is widely used in Japanese cuisine, especially to prepare Sushi Maki. It is also used in low-calorie, vegan, macrobiotic and vegetarian diets.
It is also consumed elsewhere such as in Wales, as the main component of dried seaweed food and has been actively cultivated since ancient times. In Japan, it is most often used in nori (and in China as zicai and in Korea as gim) and as such is a main ingredient in sushi. In Wales (and to some extent, England), it is used in traditional food, laverbread.
This seaweed can be found in oriental Japanese cuisine stores and organic food stores. It is sold dry and packaged in sheets. In the Far East it is easy to find it in other forms as well.
This seaweed is marketed in square greenish “sheets” obtained from the grinding and drying of real seaweed. The sheets already toasted and cut are called sushi nori or kizami nori. There are also green nori flakes (ao-nori) used as a garnish for vegetable and fish dishes, and red leaf nori (fu-nori) which is very tender and delicate, does not require cooking and is good in soups, in salads, and in dishes dressed with vinegar.
Neopyropia tenerais an algae rich in proteins, vitamins and precious minerals, it is useful against eczema and desquamation of the dermis.
Due to its food and medicinal properties it is the most consumed and popular seaweed that exists, it is the one commonly used for the preparation of sushi.
It has a high protein content and a balanced presence of vitamins (vitamins A, C and B), mineral salts and Omega 3. It is particularly rich in polyunsaturated fatty acids: linoleic acid, linolenic acid, gamma-linolenic acid, eicosapentaenoic acid (EPA ), docosahexaenoic acid (DHA), essential for the human body.
It is also rich in amino acids, including arginine. The considerable amount of taurine present in it is able to help the liver perform its functions properly.
It also contains essential trace elements, including manganese, zinc, copper and selenium, and is an important source of iodine.
The presence of fatty acids makes it a food with antiplatelet, antithrombosis, hypocholesterolemic, hormone production stimulating properties. These same substances help in the prevention of skin and stomach cancer and make PMS milder. Furthermore, clinical experts have proven their effectiveness against eczema and desquamation of the dermis: the skin becomes more elastic and flexible.
Among the contraindications it should be remembered that nori algae, like other algae, should not be taken during pregnancy, during breastfeeding and in case of metabolic diseases, moreover overdosing can have side effects especially for those suffering from thyroid: hyperthyroidism, hypertension, tachycardia, irritability and insomnia.

Preparation Method –
The nori seaweed owes its popularity above all to the preparation of sushi.
It is sold dry, in sheets folded into squares and comes almost exclusively from crops in Japan.
It is suitable for the preparation of Sushi Maki with the classic rolled shape. With the Sushinori leaflets you can create original aperitifs. Nori can also be used in salads or to prepare fish and vegetable broths and recipes. In Japan it is also eaten as a snack.
In addition to food use, it is used in the aesthetic field where it is a useful ingredient for the preparation of cosmetics for the body and hair. There are nori seaweed packs on the market that help prevent hair loss, effectively fight dandruff and oily skin, have a detoxifying, moisturizing action and can also help fight cellulite.
The seaweed should be stored in a container indoors and to prepare Sushi Maki, take it, cut it and spread it out on the bamboo mat and put the rice on top. It is also not necessary to soften the algae before using them.
Nori Sushi is wrapped in a sheet of nori seaweed and has a round and cylindrical shape; the fish is usually in the center, while the eggs are placed at the top.