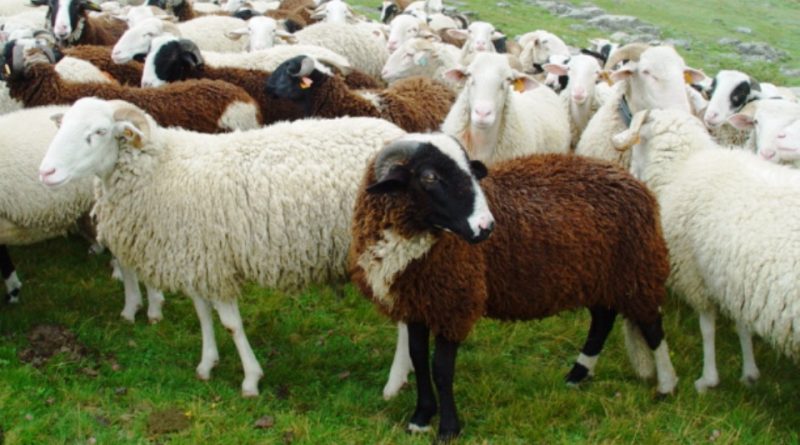 The Barégeoise is a sheep (Ovis aries Linnaeus, 1758) of French origin from the high Pyrenees, with a main aptitude for meat production.

Origins and History –
The Barégeoise sheep breed differed from other Pyrenean breeds, such as the Lourdaise, probably due to geographic isolation.
The herd book of this breed was created in 1975.
In 2007 it obtained the Protected Designation of Origin (Barèges-Gavarnie). The production area of ​​Barèges-Gavarnie PDO is made up of several municipalities of the Hautes-Pyrénées department in the Midi Pyrénées region. Barèges-Gavarnie PDO is obtained from adult sheep meat (ewe or castrated male, the latter called doublon) belonging exclusively to the Barégeoise breed.
In the 19th century, Barèges wool was spun and woven to produce cashmere under the name of barège. Very fashionable in Paris; in England it took the name of English barège.

Morphology –
The Barégeoise is a medium-sized sheep with a height at the withers of 80 cm in males and 70 cm in females. The weight varies between 75-90 kg in males and 50-60 kg in females.
The Barégeoise is stockier than other local breeds, shorter and offers a better conformation of the meat. It has short and spiral horns, less developed than those of the Lourdes or Basque-Béarnaise area.
The fleece is mainly white, but always with a certain number of subjects with brown or black coats, with variegations, in each flock.

Productive attitude –
The Barégeoise is a very popular breed for meat production. It is a high mountain breed, maternal, good walker and hardy. It has a good aptitude for seasoning.
The animals are raised in respect following the natural rhythm of the seasons, according to four moments. During the winter period (from November 1st to March 31st), the flock lives in the sheepfolds near the villages; the intermediate seasons (spring and autumn), on the other hand, include a stay in mid-mountain areas (intermediate areas); finally during the summer period (from May to October, mandatory from June 15 to August 31 for the entire flock) the animals are led to high mountain pastures (1500-2800 meters above sea level) and graze freely both during the day and in night.
The power supply consists exclusively of grazing, only in winter the use of hay and second cut is allowed.
The product of choice is the sheep that comes down from the pastures at 18-20 months. It has obtained recognition for its quality by granting the AOC Barèges-Gavarnie; this breed is registered as the only one to benefit from the AOC. This mark of quality and origin saved the breed and ancestral practice threatened by industrial crossbreeding and the sale of suckling lambs.
The wool of this breed is fine but sparse. However, it provides good protection in the open air in the mountain pastures.