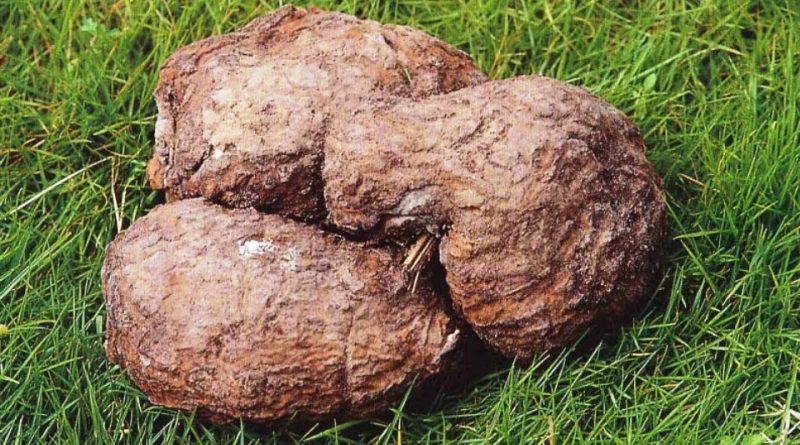 Etymology –
The term Wolfiporia of the genus is named after mycologist Frederick Adolph Wolf, who was the first to officially describe the type species.
The specific epithet extensa is the past participle of extendo stendere, stretch, stretch: stretched, elongated.

Geographic Distribution and Habitat –
Poria cocos is a fungus that grows in late summer in North America, Africa, China and Australia and prefers warm climates, not excessive humidity and sandy soils.
It is an underground fungus that grows on the roots of decaying wood and is linked to the presence of conifers, in particular red pine. 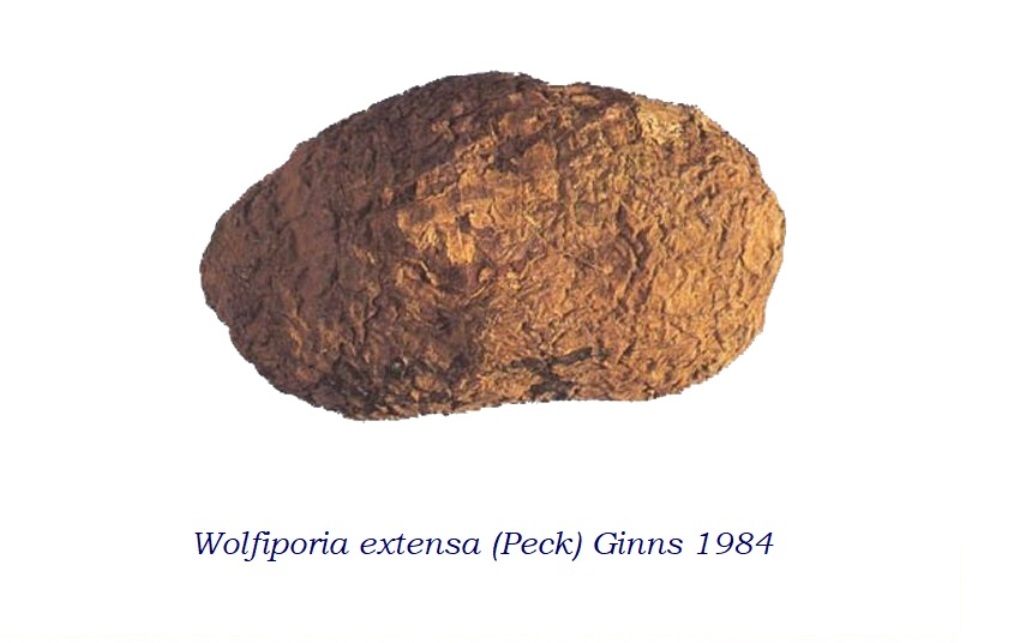 Recognition –
Wolfiporia extensa is a hypogeal mushroom with an appearance similar to a truffle but of considerable size.
This fungus forms from a large, long-lasting underground sclerotia that resembles a small coconut.
It has a somewhat wrinkled brown or dark brown color.

Cultivation –
Wolfiporia extensa is an underground fungus that grows in late summer and forms at the rotting roots and which, like the truffle, grows and develops below the ground and is widespread in wooded areas and near conifers.
It is a fungus that can be grown on substrate based on pine tree sawdust and using other materials such as: straw, branches, rice bran, sucrose, chalky powdered material.
After the inoculation of the mycelium, some precautions must be followed which include the addition of water to the mixture, the distribution of compost or organic fertilizers.

Customs and Traditions –
Poria cocos is a widely used mushroom in Chinese medicine (TCM).
Common names include hoelen, poria, tuckahoe, China root, Fu ling (茯苓, pīnyīn: fúlíng), and matsuhodo.
In China its traditional name (Fu ling) means Spirit of the pine and its therapeutic virtues have been known from antiquity as reported in the treatises of the Yellow Emperor’s Dynasty around 2.600 BC. Fu ling is described as the root of a lived pine. a thousand years in the shape of a bird in flight and found at a depth of one and a half meters underground. The treatise states that those who eat it for a long time attain immortality. According to TCM, the intimate link between the fungus and the root of the tree confers a nourishing and calming action of the Shen on the heart.
Ultimately, according to Chinese medicine, this mushroom brings significant benefits for the gastrointestinal system, for the cardiovascular system and for the mind. In fact, it would seem able to counteract depressive states, nervousness and insomnia and thus manifest a sedative and calming action on the psyche.
If taken as a supplement, it could prove useful to calm anxiety, to facilitate sleep but also to reduce the incessant whirlwind of thoughts.
This mushroom also demonstrates a positive influence on the well-being of the spleen, kidneys and heart. It can be used to promote diuresis, to stimulate appetite and to reduce palpitations and toxins in the body. It is also useful in case of abdominal swelling, vomiting, diarrhea and gastritis.
In general it is also a valid ally for the immune system: it stimulates the defenses and is suitable for those who are in a state of physical debilitation. It is also considered an effective anti-inflammatory to be used in case of arthrosis and pain caused by humidity and atmospheric variations.
From a food point of view it is a good edible mushroom, with a soft consistency, also used in the preparation of aperitifs and snacks.
This mushroom is mainly composed of beta-glucans, soluble fiber and is the source of a triterpenoid compound, pachymic acid, which has been the subject of scientific studies based on the role of the mushroom in traditional Chinese medicine.
Biochemical and pharmacological studies reveal that Poria cocos e has a wide range of biological activities including anti-tumor, immunomodulation, anti-inflammatory, antioxidant, anti-aging, anti-hepatitis, anti-diabetic and anti-haemorrhagic effects. Consequently.
In 2015, some extracts were approved as drugs by the Chinese Food and Drug Administration (SFDA) for the treatment of multiple types of cancer, hepatitis and other diseases alone or during chemo or radiotherapy for cancer patients.

Preparation Method –
Poria Cocos is harvested in the summer and then dried; it is characterized by a tender texture and a sweet taste. In the East it is now enjoyed as a simple snack to break hunger while in the past it was mainly used as an expensive natural remedy.
However, if you want to take advantage of the healing properties of this mushroom, it is advisable to take it in the form of a practical and convenient food supplement. It is available for sale online and in herbal medicine and you can choose between the drops and capsules version.
The dosage of this supplement may vary depending on the cases and the ailments for which it is administered. It is contraindicated for pregnant and lactating women and its intake is also not recommended for children.