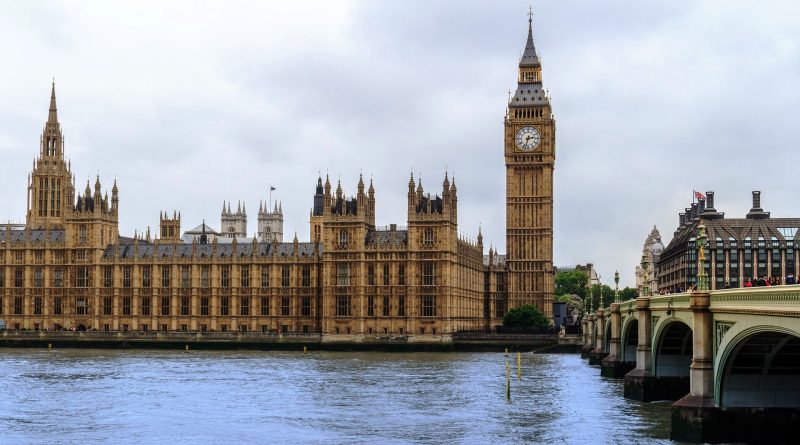 The United Kingdom is a Western European island state made up of four constituent nations which are: England, Scotland, Wales and Northern Ireland.
The United Kingdom is a parliamentary monarchy and Queen Elizabeth II is also the head of state of 14 other member countries of the Commonwealth of Nations (to which the United Kingdom has joined since 1931), known as Commonwealth realms, of which Canada, Australia , New Zealand, Papua New Guinea and Jamaica are the most populous.
The UK has a population of 68,168,033 (as of 17-04-2021). The capital is London with a population of 8,615,246 (as of 2015).

Geography –
The United Kingdom is located off the western coast of Northern Europe and is surrounded to the east by the North Sea, to the south by the English Channel and to the west by the Atlantic Ocean and the Irish Sea, the Channel Islands and the ‘Isle of Man are dependencies of the British Crown but are not part of the United Kingdom.
Great Britain is the island comprising most of the territory of England, Wales and Scotland. The British Isles, on the other hand, are the archipelago comprising Great Britain, Ireland, the Isle of Man, the Isle of Wight, the Orkney Islands, the Hebrides, the Shetland Islands, the Channel Islands and other smaller islands.
It also consists of fourteen overseas territories that make up the remnants of the British Empire, such as Anguilla, Bermuda, the British Antarctic Territory, the British Indian Ocean Territory, the British Virgin Islands, the Cayman Islands, the Falkland Islands, Gibraltar , Montserrat, the Pitcairn Islands, St. Helena, Ascension and Tristan da Cunha, South Georgia and the South Sandwich Islands, Akrotiri and Dhekelia and Turks and Caicos.
From a geographical point of view, most of the territory of England is characterized by hills and plains divided from east to west by some hill ranges. The main rivers are the Thames, the Severn, the Trent, the Humber and the Tyne. Main cities are London, Birmingham, Manchester, Sheffield, Liverpool, Nottingham, Leeds, Bristol and Newcastle upon Tyne.
Wales is mainly mountainous, the mountains of Snowdonia rise to the north-west, reaching the maximum height of Wales with Mount Snowdon. In the central region rise the Cambrian mountains and south-east those of the Brecon Beacons. North Wales is the Isle of Anglesey. The capital and main city is Cardiff located in the southern part of the region.
The territory of Scotland is characterized by plains in the southern and eastern parts and by mountains, including Ben Nevis, and highlands in the northern and western parts. There are numerous lakes and deep fjords. Scotland comprises a large number of islands located off the western and northern coasts: the Hebrides, Orkney and Shetlands. The Scottish capital is Edinburgh but the largest city is Glasgow.
Northern Ireland, located in the northeastern part of the Irish island, is mainly hilly. Its capital is Belfast.

Climate –
The climate of Great Britain, influenced by the Atlantic Ocean, is temperate and humid, with relatively small differences in temperature between winter and summer. However, the weather is variable, with frequent changes from day to day or even within the same day.
The average temperatures in the plains are always above zero even in January, when they oscillate around 4/5 ºC in the main cities, and reach 6 degrees in the southwestern tip of the country; in July they fluctuate between 12 degrees in the north of Scotland and 18.5 degrees in the London region.
Precipitation is frequent everywhere, but it is even more frequent and abundant in the north and on the western slopes. For example, in western Scotland it reaches 1,500 mm, with about 200 days of rain per year (more than one day out of two!), While in Manchester, in western England, 800 mm of rain fall in 141 days; in Plymouth on the southwest coast, 1,000 mm of rain fall in 142 days. The south-east is less rainy: in London, just 600 mm of rain fall per year, however, distributed over 109 days. 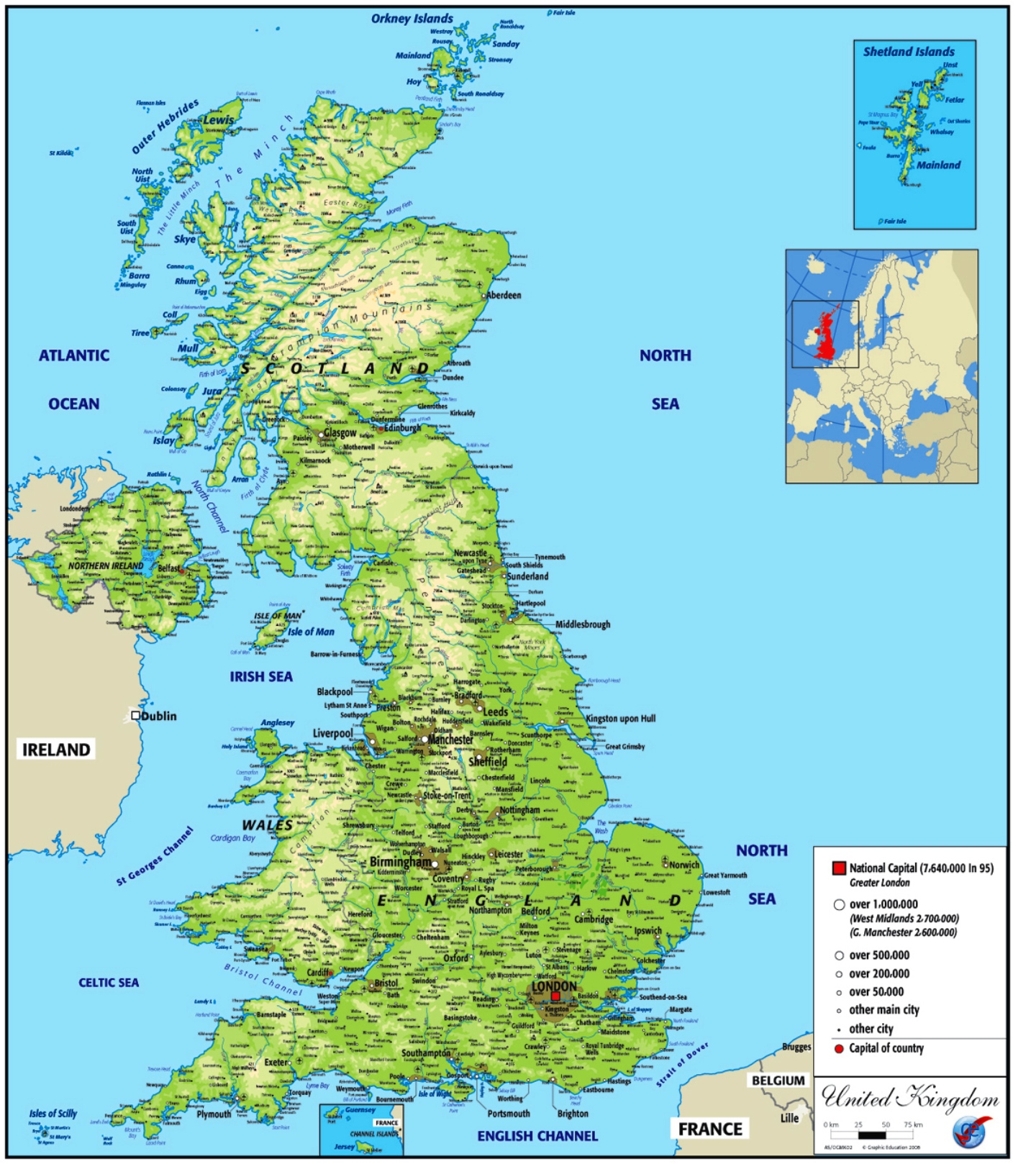 Flora-
In the past, the territory of Great Britain was covered with forests. The expansion of human settlements and the development of agriculture are among the causes of deforestation.
In prehistoric times, in fact, the wilderness of Great Britain was a dense forest of lime, oak, birch and beech trees. The locals considered many plants to be sacred, especially oaks. This was due to their ancient beliefs. However, centuries have passed and a lot has changed.
By the end of the twentieth century, Britain’s forests were largely destroyed by human activities. People felled mighty trees, dried up swamps, which led to severe changes in the species composition of flora and fauna. Exotic trees that were not there before (fir, spruce, larch) were brought to the country and planted.
Currently, the country’s forests occupy only 10% of the total area. Most of them survived on mountain slopes, in river valleys and in the south of the region. Currently, the characteristic plants of the UK – beech, ash, hornbeam, elm, oak. But fir and pine forests with oak forests grow in the Grampian mountains.
Despite the fact that in the country of large forest areas no longer exists, it still seems that this is an ecological advantage. Britain, the nature of which was badly damaged by human hands, is engaged in artificial planting of forest belts between fields, protecting fences from cold winds, reserves of forms.
In addition to forests, the country is rich in moors, without which this description of nature would not be complete. Britain is also rich in grassy grasslands, which have been preserved on wild lands that have not been developed by the people.
The sedge forests are surrounded by sphagnum swamps, which occupy the wettest places. Here are willow groves.
Separately, the beautiful grass of the central part of the country should be mentioned. Wild white and yellow daffodils, primroses, lilies, small, etc. They grow here on natural meadows and fields.
However, the heath is the plant formation that most characterizes the English landscape. In Great Britain the moorlands located on hilly territories are called moorland: the most frequent species are heather and heather. These environments, known as mysterious and wild places, are at the center of several novels and legends; for example The Hound of the Baskervilles, Wuthering Heights, Pride and Prejudice, The Secret Garden and Jane Eyre.
The moor grows on poorly fertile soils where strong winds only allow the growth of shrub vegetation.
The reclamation of large swampy areas, such as the “Fens” (humid, marshy areas, with soils rich in minerals) in East Anglia and Somerset, has transformed these lands into pastures and arable land.

Fauna –
The UK is still a wildlife rich country.
In southern Britain, deer, hares, foxes, rabbits, raccoons, otters, stoats, weasels and foxes are common. And from rodents there are squirrels, mice, mice. The reptiles here are represented by only three snake species and are completely absent in Northern Ireland.
Even now there are roe deer, fallow deer, martens, rabbits in the country’s forests. And rivers and lakes boast salmon and trout. The coastal waters that lap the coast are saturated with cod, herring and haddock.
Britain has become the home of many birds, there are more than two hundred of them. About half of them remain in the country, coming from other regions. Human activity has impacted birds. The number of some species has decreased to such an extent that it is on the verge of extinction, while the populations of others, on the contrary, have increased.
Unfortunately, after massive wetland drainage, the number of waterfowl has decreased. And the development of the land led to the destruction of some plant species, which in turn affected the birds. But pigeons and sparrows settled considerably in large cities, increasing their population every year.
To restore the number of endangered species in the state, several protected areas have been established in order to establish a conservation regime.
For example, there are numerous swans and other species of birds that migrate in the spring and summer period.
Unfortunately, many species of animals have suffered the consequences of the expansion of agriculture and urbanization, and some are now found only in protected areas.
The moose, which lives in the Scottish Highlands and Exmoor, and the red deer, in the Scottish woodlands and southern England, are the only large mammals representing endemic fauna, in addition to the wild ponies of the Exmoor and the New Forest .