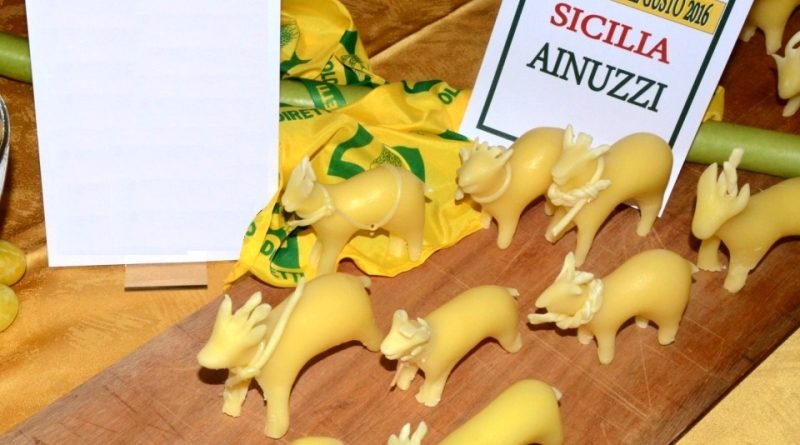 Ainuzzi is a stretched curd cow’s milk cheese, produced in the province of Agrigento, and a traditional product included in the list of traditional Italian agri-food products (P.A.T) of the Ministry of Agricultural, Food and Forestry Policies (Mipaaf).

Origins and History –
Ainuzzi is a typical cheese from the hinterland of the province of Agrigento and in particular from the municipalities of Cammarata and San Giovanni Gemini.
This cheese is linked not only to local food traditions to some religious festivals such as that of Corpus Domini or the patron saint. On that occasion, the brotherhoods carried their patron saint in procession and many of the decorations were made with the shapes of Ainuzzi. At the end of the celebrations, the cheese was distributed to the poor and the faithful to be consumed.

Geographic area –
Ainuzzi is a Sicilian cheese and processed in a restricted area of ​​the Sicani territory of the province of Agrigento and especially in the municipalities of Cammarata and San Giovanni Gemini.

Raw material –
Ainuzzi is a fat, very fresh, raw, stretched and semi-hard cheese, produced from cow’s milk obtained from the milking of cattle raised in the area.

Description –
This cheese, linked to the tradition of the municipalities of Cammarata and San Giovanni Gemini (which are confined and neighboring), is processed in small shapes of varying sizes in the shape of animals (deer, fallow deer, goats, etc.): the ainuzzi.
These can reach a weight of 100 ÷ 200 g; they have a slightly rigid skin, white – pale straw yellow in color; the paste is white and compact, quite soft and elastic; the flavor is sweet and delicate with low intensity and persistence; it has a low intensity odor and aroma which highlights the recognition of cooked lactic type (cooked milk, melted butter).

Production Method –
For the production of Ainuzzi cheese, the milk of two consecutive milks is heated to a temperature of 37 ° and added with lamb rennet. The rennet curd undergoes a break with the “rotula”, a typical wooden tool, the size of a grain of corn. Hot water at 65-70 ° C is added to the boiler, then the paste remains under the whey. When the temperature drops to 30 ° C, it is extracted and placed on sink tables, covered with sheets, where it remains for 24 hours. At the end of the acidification phase, the dough is stretched and formed. The salting is in brine.

Gastronomic use –
Ainuzzi is usually consumed as it is during the celebrations for the feast of Corpus Domini and can be accompanied with a white wine, young, quite light and with a delicate aroma (obtained for example from vines such as Grillo or Grecanico).