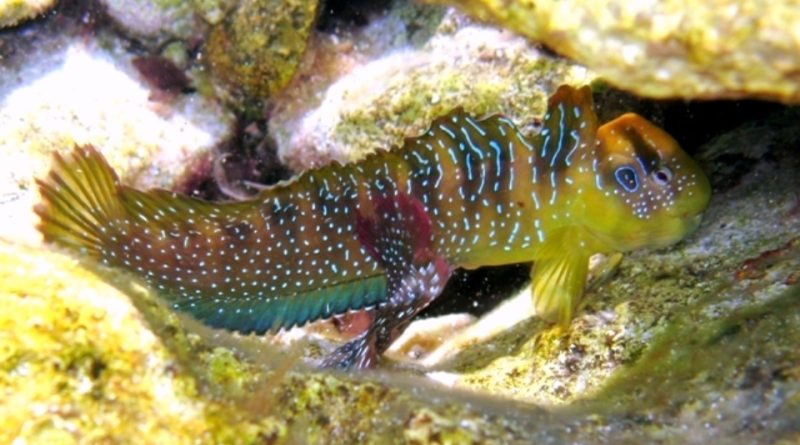 The peacock blenny (Salaria pavo Risso, 1810) is a saltwater fish belonging to the Blenniidae family.

Geographic Distribution and Habitat –
The peacock blenny is a fish found in the eastern Atlantic Ocean (from the Gulf of Biscay to Morocco), in the Mediterranean Sea, in the Black Sea and in the Suez Canal. Furthermore, this species colonized the northern Red Sea through anti-Lessepsian migration through the Suez Canal.
Its habitat is that of cliffs and areas rich in sediment, from the surface up to about 7 meters deep. It also bears polluted waters such as those of ports and can also live in brackish waters.

Description –
The Salaria pavo is a fish that reaches a length of 13 centimeters and has an elongated body, rather compressed at the sides, with a head with a high forehead; this in the male forms a showy hump on the head.
The livery is yellowish-green, with large darker bands. There are also vertical lines and electric blue dots all along the body. Behind the eye there is a dark ocello, edged with blue. During the reproductive period, the male presents yellowish or orange tones.
It has a short tentacle above each eye, hardly visible.
The fins are strong and rounded and the dorsal fin is long.

Biology –
The reproductive period of Salaria pavo runs from May to July.
In this period the female lays oval-shaped eggs, about 1 mm long from which.
The incubation, which is supervised by the male, lasts a week and at the end of the larvae 4 mm long come out.

Ecological Role –
The peacock blenny is a euryhaline species (due to its ability to withstand variations in saltiness, sometimes very accentuated, in the aquatic environment in which it lives) so much so that it can also live in brackish waters, unlike most Blenniidae.
It is also a benthic species, whose presence is sometimes found outside the surface of the water thanks to the particular mucus that prevents it from dehydrating for short periods.
Furthermore, as mentioned, it tolerates polluted waters without any nuisance, so it is easy to find it in port waters.
Its diet is based on annelids and crustaceans.
As for its fishing it is easy as it easily takes bait of any type; however, its meat is not at all appreciated even for frying so it is usually thrown back into water.
Finally, it should be remembered that it is of considerable interest, both for its colorful livery and for its adaptability to any type of water quality, one of the most common and appreciated guests of Mediterranean aquariums.