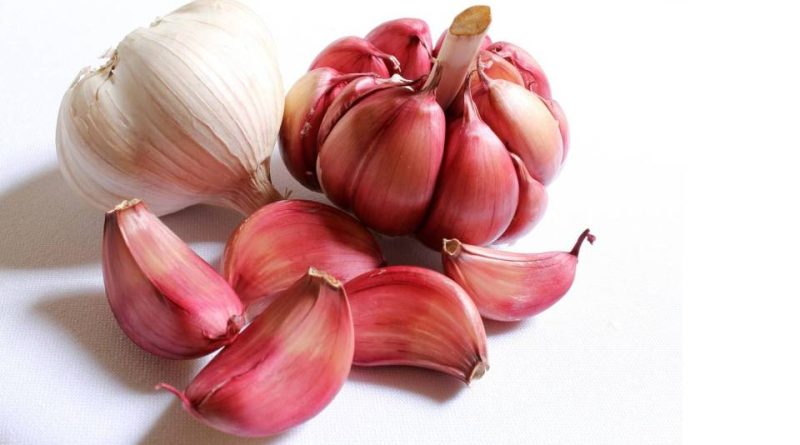 Nubia red garlic, or Paceco garlic or Trapani garlic, is a variety of garlic (Allium sativum L.) characterized by the intense purple red color of the tunics of its bulbils.

Origins and History –
The red garlic of Nubia, together with the alternative denominations of garlic of Paceco and garlic of Trapani is a traditional Italian agri-food product (P.A.T) of the Ministry of Agricultural, Food and Forestry Policies (Mipaaf).
The name derives from a small district of Paceco (Trapani) and its cultivation is generally carried out in dry, dark and clayey soils, in rotation with melons, broad beans and durum wheat.
Nubia red garlic is a Slow Food presidium and has a more intense aroma and flavor than other varieties thanks to its allicin content.
Its cultivation dates back to a long time ago and brings with it the ancient techniques of cultivation and dry rotation also of the other crops that are alternated. Traditionally, since the birth of the village of Paceco (whose first nucleus in the modern age was formed in the fourteenth and fifteenth centuries around the Church of San Lorenzo di Xitta, possession of the Order of Malta.) The cultivation methods were concentrated on this variety of red-skinned garlic. The hamlet of Nubia was also known as the “village of garlic”, precisely because this product was typical of the area. Even today, the cultivation of garlic takes place in the traditional way, from the choice of the cloves for sowing to harvesting and drying for storage.
Each step of its cultivation is handed down and carried out by hand in compliance with the environment and the product itself to keep its properties and flavor unchanged.
Currently there are 60 producing companies, which cultivate an area of ​​about 320 hectares, with an average yield of 60 quintals per hectare, obtaining a gross salable production of about 1,800 tons.
According to tradition, it is packaged in very large braids (of one hundred heads each) and hung on balconies or placed in cellars or warehouses.

Geographic area –
The red garlic of Nubia is grown in a small area in the Trapani area which includes: Nubia, which is a fraction of the municipality of Paceco (TP), where much of the production takes place within the Saline di Trapani integral nature reserve and Paceco. To a lesser extent, it is also grown in the neighboring municipalities of Trapani, Erice, Buseto Palizzolo, Valderice, Marsala, Vita and Salemi.

Raw material –
Nubia red garlic is a particular variety of garlic which, as shown by analyzes carried out by the Faculty of Agriculture of the University of Palermo, has an allicin content (about 73 mg% g of fresh garlic) clearly above average, which gives it a particularly intense flavor. It is also characterized by the intense purple-red color of the tunics of its bulbils.

Description –
This variety of garlic has a bulb made up of an average of twelve bulbils, with white outer skins and bright red ones.
Due to its characteristics it is also protected by the Slow Food trademark and the procedure for granting the Protected Designation of Origin (D.O.P.) trademark is currently underway.
The garlic is packaged in braids (trizze in dialect) and depending on the diameter of the bulb, the trizza is called a red spoon (50 mm), current (40 mm), cocchiscedda (30 mm) or mazzunedda (20-25 mm). For some years now, to meet the needs of the market, trizzas have been produced with a single braid and a smaller number of bulbs (from 10 to 50).

Production Method –
The red garlic of Nubia is grown on dark, dry and clayey soils, in rotation with the “yellow melon” of Paceco (the cartridge), the beans and the durum wheat, in order to avoid excessive exploitation and the consequent impoverishment of soils. Sowing takes place between November and January. The harvest, in the months of May and June; this takes place in the evening and at night, because the greater humidity of the leaves facilitates the intertwining of the bulbs. Always for the same purpose, before harvesting the inflorescence of the plant is removed (in dialect, spicuna).
Traditionally it is packaged in very large braids (up to a hundred bulbs), intended to be hung in front of the balconies of the houses.

Gastronomic use –
Nubia red garlic is marketed both inside and outside Sicily but in Trapani cuisine it is a key ingredient of some of the most important typical preparations: fish couscous and pasta with Trapani pesto (made with pounded garlic, basil , almonds, tomato, extra virgin olive oil, salt and pepper).
It can also play an important role in the herbalist tradition and also in phytotherapy as a natural antibiotic due to its high allicin content. In fact, garlic has been found to be effective in counteracting the development of bacteria and in increasing the prevention of viral infections.
In addition, garlic balances blood pressure by being a hypotensive with vasodilating properties that make it a natural antithrombotic, also preventing cardiovascular diseases.