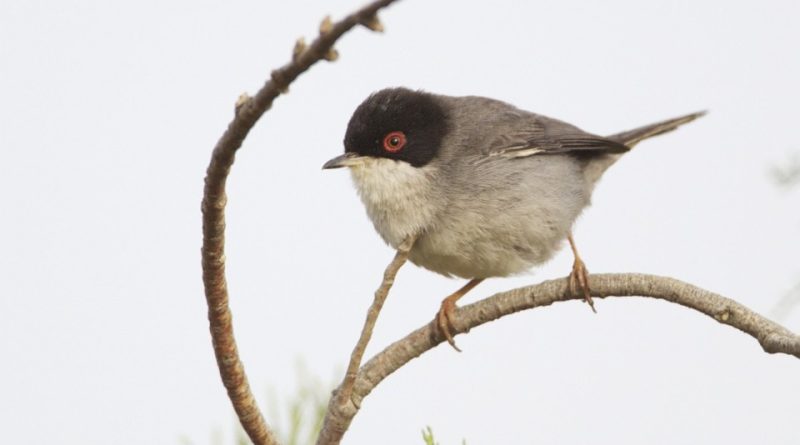 The Sardinian warbler (Sylvia melanocephala, Gmelin, 1789) is a passerine bird belonging to the Sylviidae family.

Geographic Distribution and Habitat –
The Sardinian warbler is a bird present in an area that includes the Mediterranean basin up to Turkey and the Caspian Sea.
In Italy it is sedentary and nesting, very localized along the coasts and in the northern regions, but migratory populations coming from Africa passing through the peninsula are known.
In Spain it nests, continuously occupying the entire Mediterranean coast and the southern half where it has a stable presence, but is also localized in many points of the northern half, thus appearing isolated in the basin of the Douro river, being discontinuous in that of the Ebro In Galicia permanently occupies the coast of Pontevedra, some areas of the coasts of A Coruña and the basin of the river Miño. As a breeder it is present in all the Spanish Autonomous Communities with the exception of Asturias. As for the Spanish islands, they occupy both the Balearic Islands and the Canary Archipelago where it is widely distributed.
Its habitat is that of the dense Mediterranean scrub, frequently present in hawthorn, cork oak, mastic, palm, juniper, holm oak or pine forest, but always with undergrowth. It also occupies gardens and groves or groups of trees near houses, both decorative and cultivated. It is common in areas of brambles and weeds, orchards, river banks, rain fruit trees, and even suburban areas. They move among shrubs and weeds at low altitudes where they love to live and smell, but can also be seen in trees. It is rarely seen flying long distances and more often it spends time drifting among the low branches of bushes and bushes, incessant in its hectic life. It nests in tall bushes, in open woodland with dense thickets, although it also does so in crazy vegetation that barely comes to life. It nests in bushes, which are generally quite low.
The altitude range of presence is up to 900 meters above sea level. 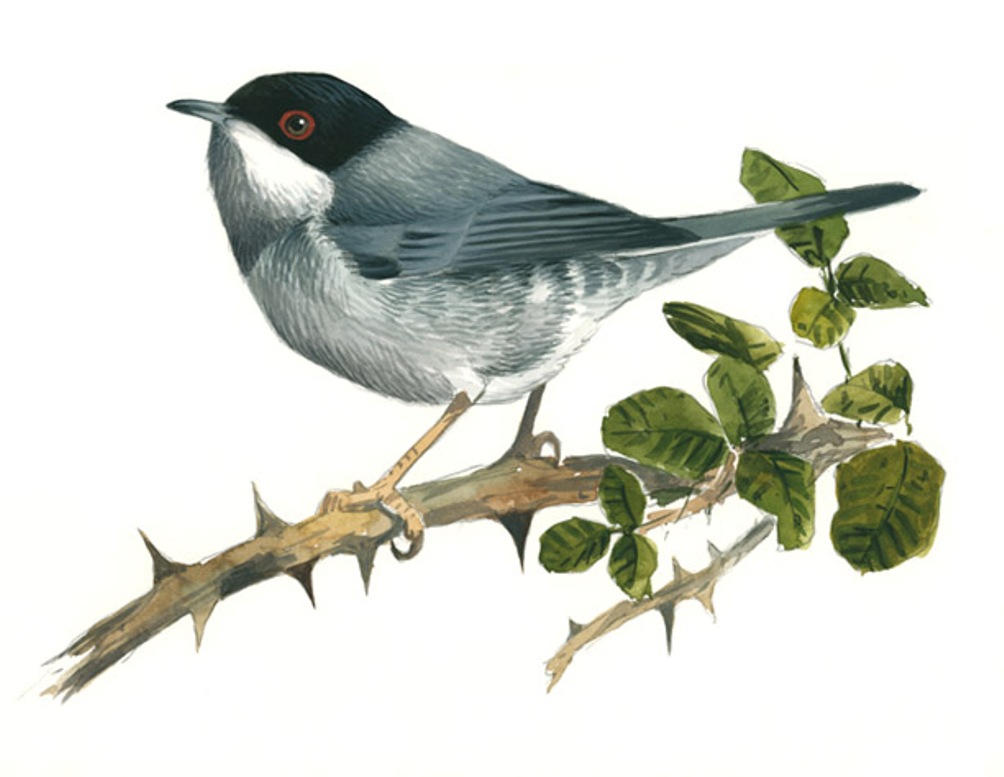 Description –
Sylvia melanocephala is a passerine bird between 13 and 14 cm long, with a wingspan of 18-20 cm and with the presence of sexual dimorphism.
The adult male is recognized for having gray upper parts and wings.
The upper tail is dark gray, tending to blackish with a white edging of the coxswain.
The head is black with a brown eye and a red eyelid.
The throat is white, the chest gray which becomes lighter towards the abdomen.
The legs are light brown and the beak is black with a little gray at the base in the lower jaw.
Adult females, on the other hand, are recognized for having brown upper parts and wings, gray head with brown eye and palpebral rim of a duller red than in the adult male.
The chest is light brown fawn and becomes lighter on the belly; the undertail is white. Beak, legs and throat have the same colors as in adult males.
Juveniles resemble adult females.
The color of the egg is very variable; you can have eggs of a pinkish hue, or of a white color slightly tinged with greenish, or even brownish, etc. They all have spots and color spots in different shades, reddish brown, olive, gray, beige, yellowish, purple, etc. The dimensions are around 17.8 x 13.6mm.
The voice of this bird is variable. When in alarm it emits a fast, threatening tri-tri-tri-tri with a low, hoarse tone. Other sounds are of the sirsirsir or stictictic type.

Biology –
Sylvia melanocephala is a species that overwinters in nesting sites in central-southern Italy and Europe and in part also migrates to Africa.
The nesting takes place in the dense bushes in the period from the end of March to June.
The brood consists of 3 or 5 eggs with eggshell of varying color and punctuation.

Ecological Role –
The Sardinian warbler is an essentially sedentary bird, even if, during the post-nuptial or winter period it is more mobile. In summer it lives among bushes, low spots on hot and arid hill slopes, while in winter it frequents uncultivated grassy fields, cultivated fields with hedges and bushes, gardens and urban parks at lower altitudes and in particular near the coast. However, it is very sensitive to prolonged winter colds, which are often fatal.
This bird feeds mainly on insects, having a predilection for the larvae of orthoptera, hemiptera and lepidoptera, although it also feeds on spiders, among others. In addition, it also feeds on different types of fruit, such as figs, grapes, the different wild fruits that it finds on its way or, for example, grass seeds.
This species is protected pursuant to Law n.157 dated 11-2-1992 “Rules for the protection of homeothermic fauna and for hunting” and a strictly protected species according to the Berne Directive of 19-9-1979 ( Annex II).