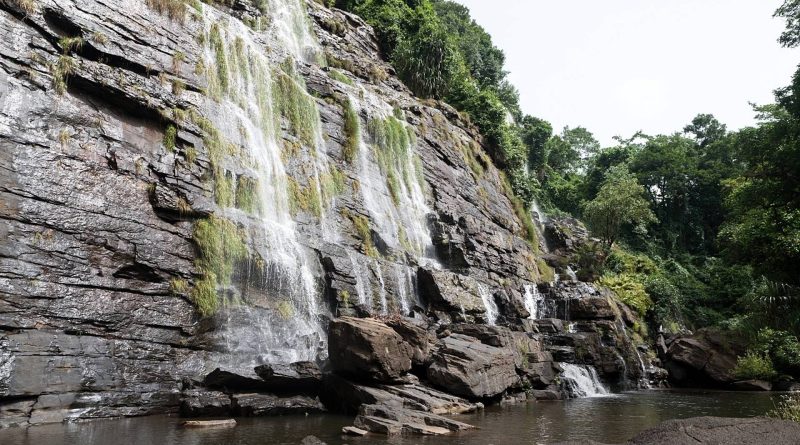 Guinea is a West African state that borders Guinea-Bissau and Senegal to the north, Mali to the north and northeast, the Ivory Coast to the southeast, Liberia and Sierra Leone to the south, and the Atlantic Ocean to the west. Its territory includes the source of the Niger, Senegal and Gambia rivers.
Guinea has a population of 13,639,439 (as of 2017) and the capital is Conakry with a population of 3,667,864 (as of 2017).
Guinea has considerable mineral resources which it exploits for the development of its economy, which also relies on agricultural activity.

Geography –
Guinea is located in the West African region, just south of the Sahel belt. It borders Guinea-Bissau for 386 km, Mali for 858 km and Senegal for 330 km to the north, Mali and Ivory Coast for 610 km to the east, and Sierra Leone for 652 km and Liberia for 563 km to the south; it overlooks the Gulf of Guinea to the west.
The country is divided into four main regions: maritime Guinea, a narrow coastal strip; Middle Guinea, an inland pastoral region, characterized by strong temperature variations; Upper Guinea is located in the north, it also covers some areas of Sierra Leone, Ivory Coast and Liberia and the environment is that of the savannah; and Forest Guinea, which is precisely an area with a large forest heritage and in which rains abound: this is also the reason why it is the most populated part of the country and even has overpopulation problems. In this region they sheltered many refugees who fled following the civil wars in Sierra Leone, Liberia and Ivory Coast. In Lower Guinea there is the Fouta Djalon region, inhabited mostly by the Fula ethnic group. This region, rich in waters and located at an altitude of about 900 meters, is the most important in the country.
Inside Guinea we find many rivers that cross it. Among these we remember: Konkourè, Moa, Saint Paul, Saint John, Sankarani, Koro, Corubal, Gambia. The two most important rivers are however the Bafing (second for length) and the Niger which is the longest; this has two tributaries: Bala and Milo and flows into the Gulf of Guinea as a delta.

Climate –
In Guinea, the climate is tropical, with a dry season in the winter months, and a rainy season, monsoon-like, in the summer months.
Precipitation is more abundant along the coast, where it reaches 4,000 millimeters per year, while it is less abundant in the north and north-east, where it slightly exceeds 1,000 millimeters. Although the rains are more violent on the coast, the rainy season lasts longer in the south-eastern part, where the first showers occur as early as the second half of February, and the last ones in November, while in Conakry, on the coast, the rains they run from May to November, and in Kankan, in the east, from May to October.
Winter, from December to February, in Guinea is hot, dry and sunny, with the prevalence of north-east winds (harmattan) which can bring desert dust. In fact, in this season, if the nights are cool, during the day very high values ​​are reached (32/34 degrees, but with peaks of 40 ° C). Starting from February, the first showers occur in the south, while the heat builds in the center-north.
Spring warming is felt less along the coast, which is mitigated by ocean breezes, but also in the inland areas of the center-south, both due to the higher altitude and the precocity of the monsoon.
The internal part of Guinea is instead almost everywhere occupied by hills and not high mountains, whose altitude reaches a maximum of 1,500 meters (both in Monte Loura in the north-west and in Monte Nimba in the south-east) and here the climate is slightly less hot.
The northern areas, being close to the Sahel belt, are instead threatened by drought. But in addition to this, there are several environmental problems: especially in the vicinity of the Sahel region, desertification is advancing, and deforestation is also affecting the territory. Finally, the soil is damaged by pollution and erosion. 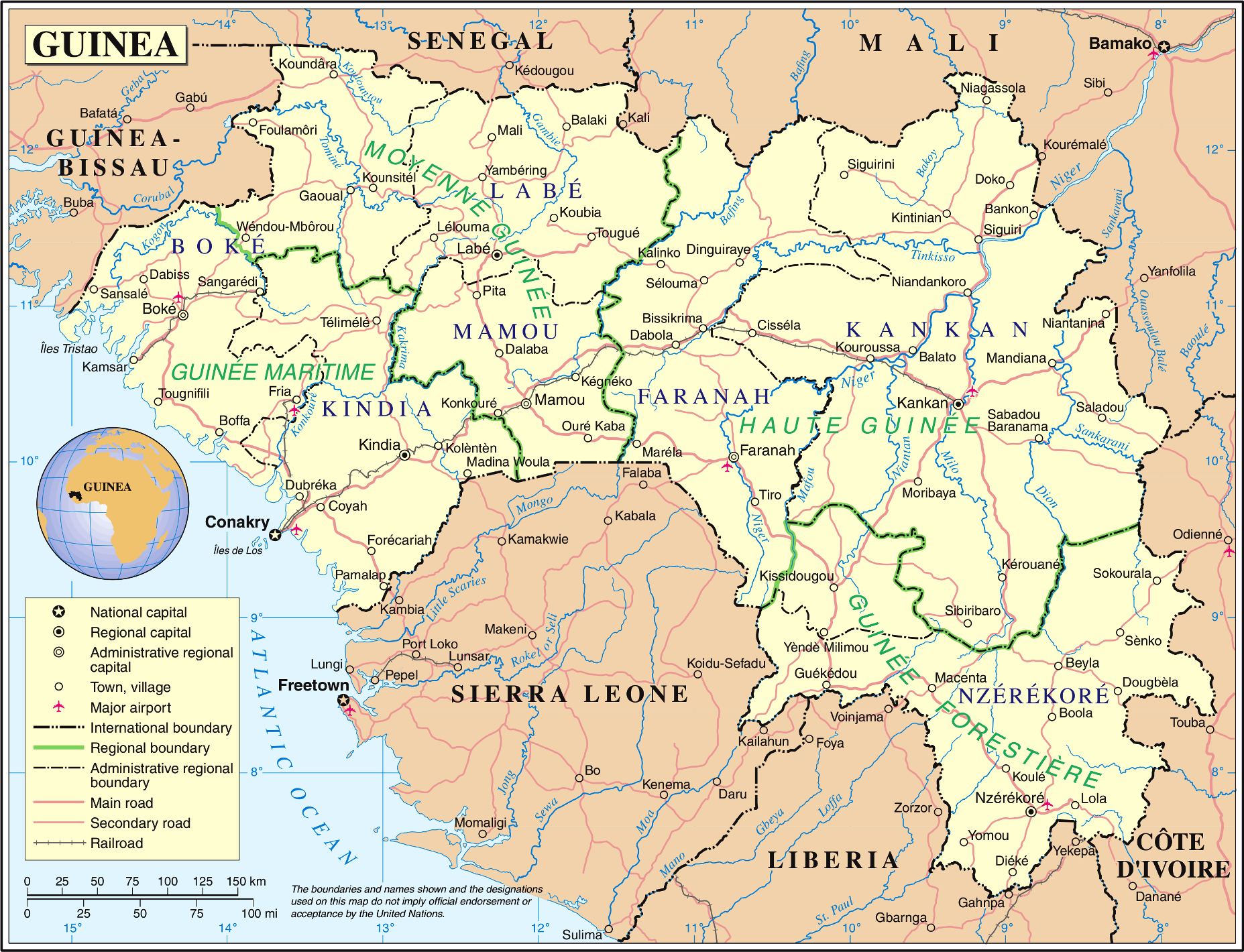 Flora-
The flora of Guinea is affected by its different morphology and exposure; Guinea, in fact, is divided into four distinct areas: a narrow flat coastal strip, the Futa Jalon plateau, the north-eastern arid lowlands and the Region of Forests in the south-eastern part of the country. From the plateau of Fouta Jalon, which exceeds 1500 m in altitude.
The southeastern part of Guinea is flat and covered with dense vegetation, but the virgin rainforest survives only in a few stretches.
There are many protected areas in Guinea (forêts classées), although little is done to enforce environmental protection regulations. The Mount Nimba Nature Reserve, in the far south-east of the country, along the border with the Ivory Coast, is classified as a World Heritage Site by UNESCO, which however has not prevented the government from opening an iron mine on the mountainside. Also nearby is the Forêt Classée de Ziama, where the rainforest remains untouched (at least for the moment) and elephants are often seen. The future of the two national parks, Parc Transfrontalier Niokolo-Badiar, near Koundara, and Parc National du Haut Niger, northeast of Faranah, is uncertain due to lack of funds.
Unfortunately, the data relating to Guinea’s environmental protection are alarming. The population of almost all animal species is constantly decreasing and for most of the flora and fauna no basic data has ever been collected. The main problem is deforestation. The repatriation of most refugees has alleviated the problem of logging to make way for agricultural land, but logging continues, favored by the near total lack of controls, and is advancing so rapidly in the south that the Forest Region deserves a new name. . Along the coast, much of the mangrove forest has been cleared to make way for rice cultivation and unregulated fishing is becoming more and more of a problem. The big mining companies have pledged to improve mining methods and some signs that this is actually happening are already beginning to be noticed.

Fauna –
Equatorial Guinea has an extraordinary environmental heritage given primarily by the rainforest and the extraordinary variety of animal and plant species found within it. However, the forest and its biodiversity are threatened by human activity and above all by deforestation destined for the international timber trade, which is obviously affecting the animals living inside as well as its flora.
Large animals are rarely seen, although the forest is populated by waterboks, bongos, buffaloes, baboons, leopards and lions, and the river waters by crocodiles, manatees and hippos. The abundant bird life includes brown-cheeked hornbills, long-tailed goshawks, gray parrots, and black flycatchers. Two noteworthy amphibians, both endemic to Mont Nimba, are the goliath frog, which can weigh as much as three kilos, and the Mont Nimba toad, which gives birth to fully developed frogs. Guinea is one of the last strongholds of chimpanzees. The colony based near Bossou sparked great media interest in 2005, after a Japanese researcher documented that these monkeys not only knew how to identify and neutralize the traps prepared for them, but were also able to pass this expertise on to other members of the group. As Guinea borders on Ivory Coast and Senegal, countries that allow ivory trade, the country’s already small elephant population is at particular risk.
In Equatorial Guinea there are about 3000 gorillas in turn threatened by hunting and the disappearance of their habitat.
Among the species present and threatened by human action there is also the chimpanzee, together with the gorilla object of study and protection by the Jane Goodal Institut, the research institute founded by the famous British ethologist Jane Goodal.