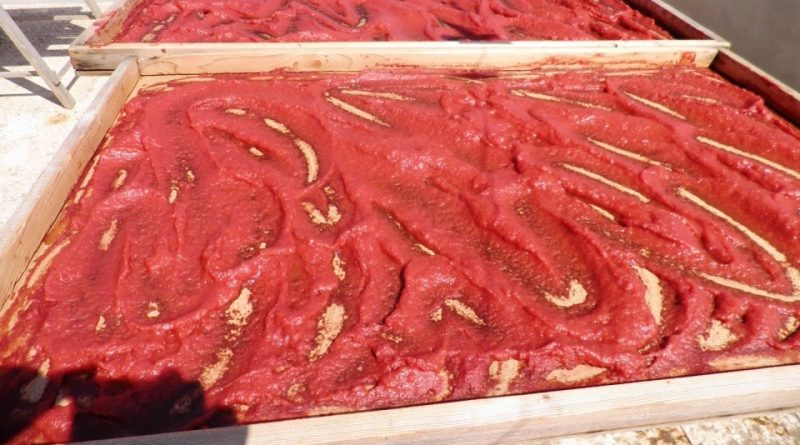 Helioconcentrate, or tomato extract, in Sicilian “Astrattu” is a concentrated tomato sauce obtained with the technique of concentration through sun exposure.
It is a typical Sicilian product which, as such, has been officially included in the list of traditional Italian food products (P.A.T) of the Ministry of Agricultural, Food and Forestry Policies (Mipaaf).

Origins and History –
The tomato extract is a product mainly of the Sicilian summer gastronomic tradition. This production has very ancient origins. It represents one of the ways in which in ancient times the tomato was preserved for winter uses, since obviously this fruit of nature was only available in summer. More than a recipe, making tomato paste in Sicily is an art. It is the Sicilian preserve par excellence, still made with the ancient process. A tradition full of passion that is handed down orally from family to family. Each family has its own recipe: it can be made with raw tomatoes, but it can also be obtained from the sauce. We need tomatoes, sun and salt and a lot of patience. Every summer, doing the Abstrattu was a ritual that involved the entire family from the largest to the smallest, each with their own task. Once it was used to prepare it at home, in the countryside, but also in the city: a small terrace or even just a balcony was enough, on which to expose the wooden tables on which the tomato pulp was placed and the sun did the rest.
Families generally gathered to make tomato sauce to be bottled, part of which was intended for the preparation of the abstract.
This preparation was then used in the following winter in the preparation of dishes with a unique and inimitable taste such as pasta “co ‘sugu fintu”, the classic meat sauce or in meat sauce, mainly. In ancient times, especially in small inhabited centers, it was not uncommon to see large rectangular wooden containers with rather low sides (maiddi = cupboards), placed over the “trispiti” filled with tomatoes left to dry in the street. Sometimes it was found next to the doors of the ground floors, or in the terraces, in the courtyards or in the finistruni (balcony).
The tomatoes harvested in the morning were well washed and checked one by one, then split in two or four and put to cook “na caurara” (copper or aluminum pot), over a furnace. After boiling the tomatoes in the large pot, the sauce was made, involving the whole family. The tomato, after cooking, was passed through a sieve. Sometimes the help of neighbors was also asked, since the sieve was used by hand and sometimes it took all day for this operation. The sauce obtained was distributed on large terracotta plates, “fanguotti” and dried in the sun, making sure to cover it with a tulle to prevent insects from settling on it. The sauce was then mixed “stirred” several times a day, using a wooden spoon and having the foresight to return it in the evening to prevent the “shower” humidity of the night making it sour. This operation lasted for several days until the sauce dried and from tomato puree it became tomato concentrate, creamy and tasty “abstract”. It took from three days to a week to have a dry product. At this point it was kept in earthenware jars, covered with good extra virgin olive oil and bay leaves.

Geographic area –
Helioconcentrate is a typical Sicilian product and historically prepared in the provinces of Agrigento, Messina, Palermo, Ragusa and Trapani.

Raw material –
Few but quality ingredients are needed to prepare the tomato extract. In percentage, the ingredients for making abstract are:
– 1 kg of tomato sauce;
– 35/40 gr of fine salt per kg;
– extra virgin olive oil to taste for conservation.

Description –
The helioconcentrate, or tomato extract, after the long processing that leads it to stabilize it, looks like a creamy but consistent product, with a strong but pleasant smell of tomato, and is stored in earthenware jars, covered with good extra virgin olive oil and bay leaves that contribute to the conservation phase.

Production Method –
For the production of tomato extract, perfectly intact and organic tomatoes must be used (which was once normal).
After having washed and cut the tomatoes in or in two or in four, you need to make a puree like a common tomato sauce, and then add the salt.
This puree should be placed in one more dishes or in a fairly large pan and dried in the sun, covered with a tulle to prevent some gnats from getting inside.
It should be mixed 2/3 times a day, in the evening brought home, this for 2/3 days until it is completely dry. Salt is added as needed.
For storage, you can use glass jars with a drizzle of oil on the surface. The jars should be stored in a cool and dry place, preferably in the dark. They can also be kept in the fridge, or be sterilized in a water bath for 15 minutes.
In home preparations, the concentrated helium is traditionally placed in clay jars, or more often in glass jars. Finally, the contents are covered with a bay leaf and, before corking, sealed with a layer of oil.
Before use, like all tomato concentrates, they must be diluted in water.

Gastronomic use –
Tomato extract was and is still used in the preparation of many dishes of typical Sicilian cuisine. For example, a walnut of extract should be added to the pasta ch’i vruocculi or broccoli arriminati (pasta with broccoli in a pan), to Sardinian pasta as well as to the classic meat sauce. But it is also used to flavor fish or other dishes and there are those who even eat it spread on bread, preferably hot.