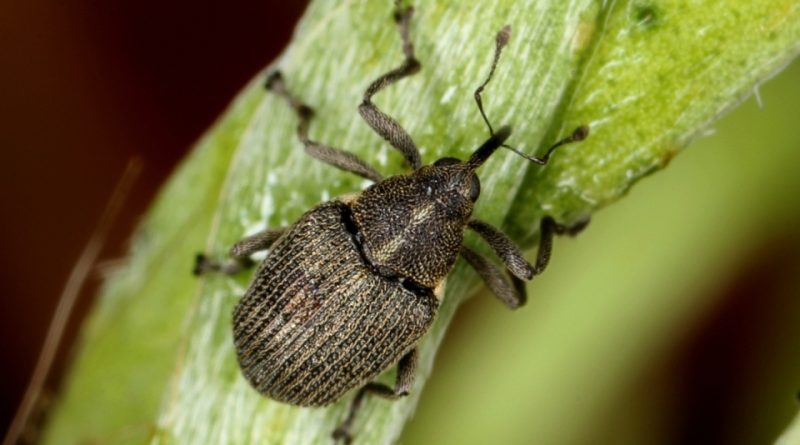 The turnip gall weevil (Ceutorhynchus pleurostigma, Marsham, 1802) is an insect belonging to the Curculionidae family.

Geographic Distribution and Habitat –
Ceutorhynchus pleurostigma is a weevil present in the central-northern area of ​​Europe and also found in Brazil and which develops on wild or cultivated cruciferous plants, especially on rapeseed, cabbage, cauliflower mustard (Sinapis arvensis).

Morphology –
The turnip gall weevil is a small weevil of about 2,5-3 mm in length, of a blackish gray color except for the tip of the rostrum and the buccal parts which are reddish.
The body is decorated with small, very elongated scales or hairs.
The elytra have striated, a little narrower than the interstriatures which carry many ranks of elongated scales and which leave the extremity of the abdomen uncovered.
The larva is about 3.5-4 mm long and is whitish in color with a brown head.

Attitude and Life Cycle –
Ceutorhynchus pleurostigma is an insect that has two subspecies, one of which is characterized by a summer diapause and reproduces in autumn, the other has a winter diapause and reproduces in spring. In the first case, adults appear in the spring after the winter break, after which they mate and lay in May. The adults generated by this deposition live for the whole summer season on the Cruciferae in the first cold weather they hide in the soil to winter.
In the second case, the deposition takes place in August and September. Larval development continues throughout the winter. The larvae pupate in the following spring and the adults appear in June. They remain in diapause during the summer.
However, this weevil makes only one generation per year.
To spawn, the female digs a cavity in the collar of the plant where she lays an egg which she covers with an anal secretion that hardens in the open air. Each female lays about 140 eggs. In the case of autumn laying, 20 to 30 eggs can be laid on the same plant.
After laying, embryonic development lasts about 23 days.
The escaping larva develops on a gall at the level of the collar. Completed its development, it pierces the tissues and then penetrates the soil, where it creates a silk-covered loggia and passes to the nymphosis.
Larval development lasts 28 days at 15 ° C; 190 to 3.5 ° C. Nymphosis lasts 31 days at 20 ° C and 58 at 15 ° C.
The damage occurs in many parts of the plant (roots, leaves, shoots and silique) and is determined by the trophic action of the adults who feed on the epigeal organs and dig oviposition galleries in the roots. The attacked plant reacts to the presence of the larvae in the roots and produces galls which compromise its normal development.

Ecological Role –
The Ceutorhynchus pleurostigma is a beetle that with the larval substances and secretions causes a hypertrophy of the collar or gall that can reach from 2 to 3 cm in diameter in the Cabbage. Following the multiple autumn depositions, the different neighboring tumors converge and the set of galls can reach 8 to 10 cm in diameter. They should not be confused with the deformations of the collar due to the hernia of the cabbage which never encloses the larval lodge.
The adults, depending on the time of the year, feed at the expense of the buds, the floral buttons, or the flowers of the host plant.
The fight against this insect must be set up mainly with agronomic measures and with cultivation techniques – rotation – association of an agroecological type.
The agronomic struggle consists in the destruction, after harvesting, of the infested plants to prevent future infestations.
The chemical fight is carried out against adults and is carried out only in case of strong infestations but must be carefully evaluated according to the negative effects on the fauna and useful entomofauna.