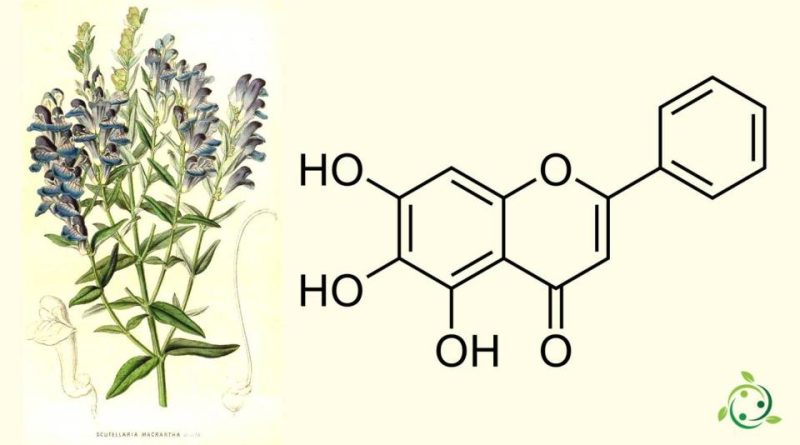 Baicalein, whose term in the official IUPAC nomenclature is: 5,6,7-trihydroxy-2-phenyl-chromen-4-one is a flavone of natural origin with a brute or molecular formula: C15H10O5.
Baicalein which has the alternative name of 5,6,7-trihydroxyflavone was first isolated from the roots of two plants: Scutellaria baicalensis Georgi and Scutellaria lateriflora L.
However, baicalein is present in other species including: Oroxylum indicum (L.) Benth. ex Kurz and Plantago major L., 1753.
Baicalein is present in Sho-Saiko-To, a Chinese herbal supplement that is believed to improve liver health.
Baicalein, together with its analogue baicalin, is a positive allosteric modulator of the benzodiazepine site and / or a non-benzodiazepine site of the GABA A receptor.
Displays the selectivity of subtypes for GABA A receptors containing α2 and α3 subunits.
In this sense, baicalein shows anxiolytic effects in mice with no incidence of sedation or muscle relaxation. Furthermore, it is believed that baicalein, together with other flavonoids, may be at the basis of the anxiolytic effects of S. baicalensis and S. lateriflora.
Furthermore, baicalein is also an estrogen receptor antagonist or antiestrogen.
Studies on this flavonoid have shown that it inhibits some types of lipoxygenase and acts as an anti-inflammatory agent.

Baicalein also possesses antiproliferative effects on ET-1-induced proliferation of pulmonary artery smooth muscle cell proliferation through inhibition of TRPC1 channel expression.
Further animal research has attributed possible antidepressant effects to baicalein.
In addition, baicalein is an inhibitor of CYP2C9 which is an enzyme of the cytochrome P450 system that metabolizes drugs in the body.
Baicalein has also been shown to inhibit Staphylococcus aureus biofilm formation and the in vitro quorum detection system.
Finally, in vitro, it has shown efficacy against all forms of Borrelia burgdorferi and Borrelia garinii.