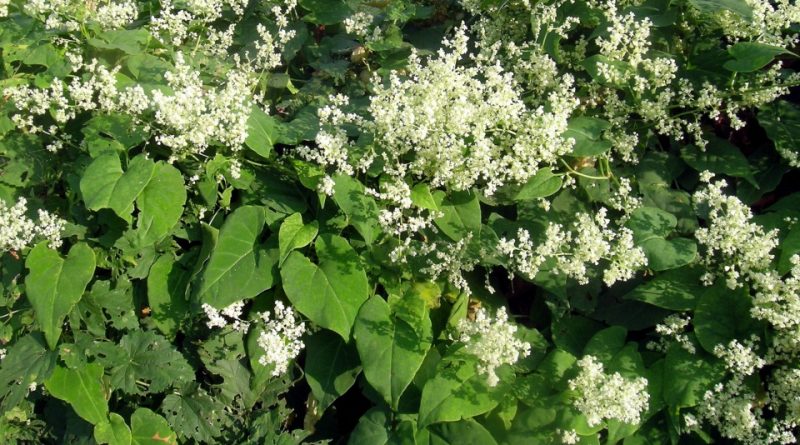 Etymology –
The term Reynoutria of the genus was dedicated to the Flemish nobleman Karel van Sint-Omaars (1533-1569), botanist and humanist, lord of Dranouter (Frenchized in de Reynoutre).
The specific multiflora epithet comes from multus molto and flos floris fiore: with many flowers.

Geographic Distribution and Habitat –
Tuber fleeceflower is a plant native to central and southern China and peresent in a wider range that includes: East Asia, Vietnam and Thailand.
Its habitat is that of mountain slopes, rocky crevices, woods and valleys, along the banks of streams at altitudes, in China, from 200 to 3,000 meters. 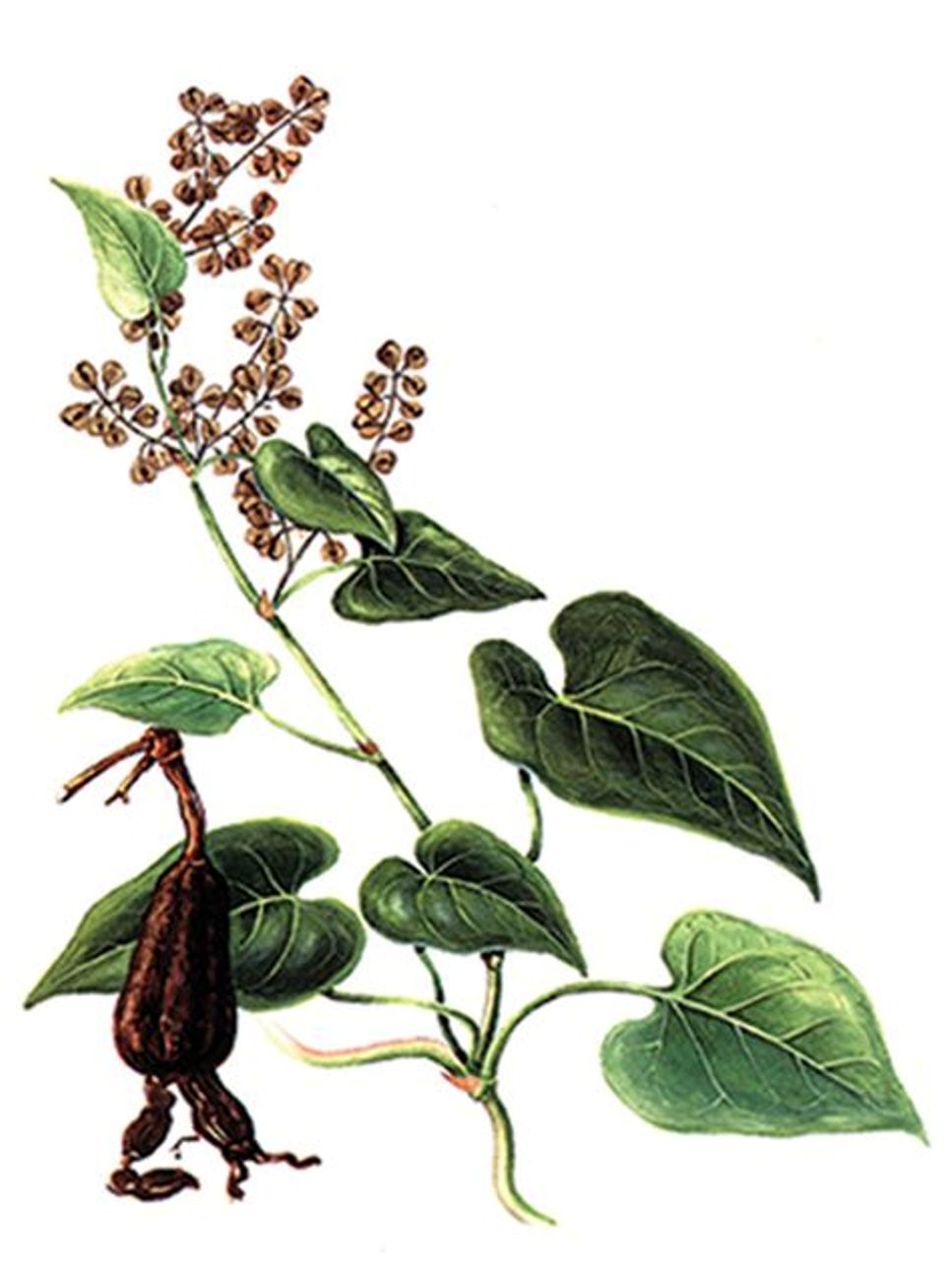 Description –
Reynoutria multiflora is a climbing and perennial herbaceous plant that grows up to 2-4 m in height from a woody tuber.
The leaves are 3-7 cm long and 2-5 cm broad, with a broad lanceolate shape and an entire margin.
The flowers have a diameter of 6-7 mm; they are white or greenish-white in color, produced on short and dense panicles up to 10-20 cm long.
The antesis is between summer and autumn.
The fruit is a diclesium, with 2.5-3 mm achenium, ovoid, trine, blackish-brown, smooth and shiny, included in the growing and persistent fruiting perianth.

Cultivation –
Reynoutria multiflora is a perennial climbing plant that is considered one of the most important Chinese herbal tonics and is widely used as a medicine.
It is a plant of temperate to subtropical zones, although it enters the tropics in southern China and is cultivated in parts of Indochina. The plant is hardy to at least -15 ° C when in a dormant state.
For its cultivation we recommend a not too fertile soil that retains humidity, in a sunny position or in partial shade.
It propagates by seed which has a high percentage of germination. It is recommended to sow in containers and, when the seedlings are large enough to handle, plant in individual pots. The transplant in open field must be done when the plants are perfectly formed.
It can also propagate by division; the larger divisions can be planted directly in their permanent positions while the smaller ones are placed in pots, where they will be grown and then transplanted when they are well rooted.
You can also prepare stem cuttings 30 – 40 cm long.

Customs and Traditions –
Reynoutria multiflora is known in different ways: tuber fleeceflower in English, as he shou wu in China and East Asia and various other names.
This plant is marketed both locally and internationally, being commonly harvested in the wild or also grown for medicinal use in China, Japan and Korea. In addition, the plant is sometimes also cultivated as an ornamental species.
For edible use raw or cooked leaves are used.
The seed is consumed both raw and cooked but is rather small and complicated to use.
The root can also be eaten but cooked. It has a bitter taste so it should be washed several times to decrease the bitter taste but this process also removes many of the vitamins and minerals contained in the roots.
This plant has represented and also represents a food in times of famine.
For medicinal use it is considered one of the most important Chinese herbal tonics and is widely used in that country. It is said to restore vitality and virility.
It has an action mainly in favor of the liver and the reproductive, urinary and circulatory systems.
However, care should be taken, as excessive doses can cause rashes and numbness in the extremities.
The roots and stems are antibacterial, anti-cholesterol, antispasmodic, astringent, cardiotonic, demulcent, purifying, hypoglycemic, laxative, sedative and tonic.
The roots are taken internally to treat menstrual and menopausal disorders, constipation in the elderly, swollen lymph nodes and high cholesterol levels. They are very effective in lowering high blood cholesterol levels and increasing blood sugar levels.
It is said that if the rhizomes are taken for a long time, the hair and beard turn black.
Applied externally, the roots are used to heal ringworm, bleeding wounds and sores.
The leaves and roots tone the liver and kidneys, fortify the blood, strengthen the muscles and prevent premature graying of the hair.
The stem is obstructive and sedative and is taken internally in the treatment of insomnia and neurasthenia while it is applied externally to the ringworm.
The extracts of the plant showed antipyretic, antitumor, hypoglycemic and sedative activity.
From a biochemical point of view, more than 100 chemical compounds have been isolated from Reynoutria multiflora and the main components that have been determined are: stilbenes, quinones, flavonoids and others.

Preparation Method –
The tuber fleeceflower is used both for food and medicine.
For edible use the raw or cooked leaves are used while the seed is consumed both raw and cooked.
The root can also be eaten but cooked.
The leaves must be collected especially if they are kept.
The roots are harvested in the fall, preferably from 3-4 year old plants, and dried for later use.
The stems are harvested in late summer or early fall and dried for later use.
Care must be taken, however, when using this plant as excessive consumption can lead to toxicity-induced hepatitis.