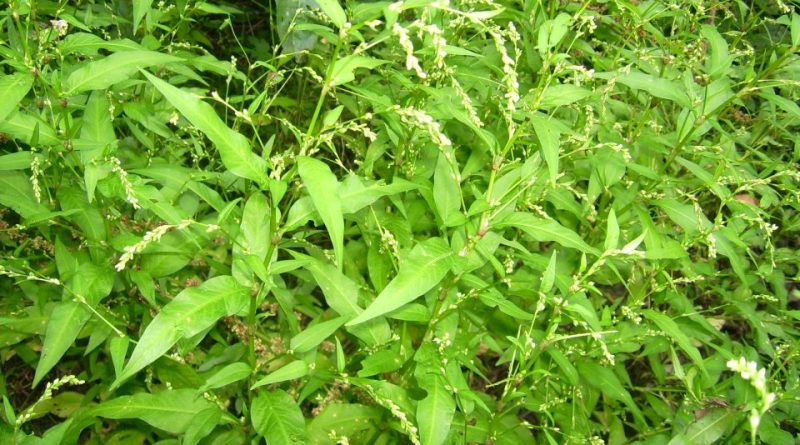 The Water pepper or marshpepper knotweed (Persicaria hydropiper (L.) Delabre 1800) is a herbaceous species belonging to the Polygonaceae family.

Etymology –
The term Persicaria comes from malus persica, peach tree: due to the leaves similar to those of the peach tree of many species in this genus.
The specific hydropiper epithet comes from the Greek prefix ὕδρο- hýdro- relating to water and from piper pepper: water pepper.

Geographic Distribution and Habitat –
The water pepper is an annual plant with a vast circumboreal distribution and present in many parts of Europe, in the Mediterranean, in temperate and tropical Asia up to Australia.
In Italy it is present in almost all regions (it is absent in Puglia and Sardinia).
Its habitat is that of areas with the presence of shallow waters, ponds, ditches, etc. and in humid places on earth and on the banks of rivers, streams, humid valleys, where it sometimes grows submerged and at altitudes from sea level up to about 1300 m but being able to go further as in China, up to 3,500 meters. 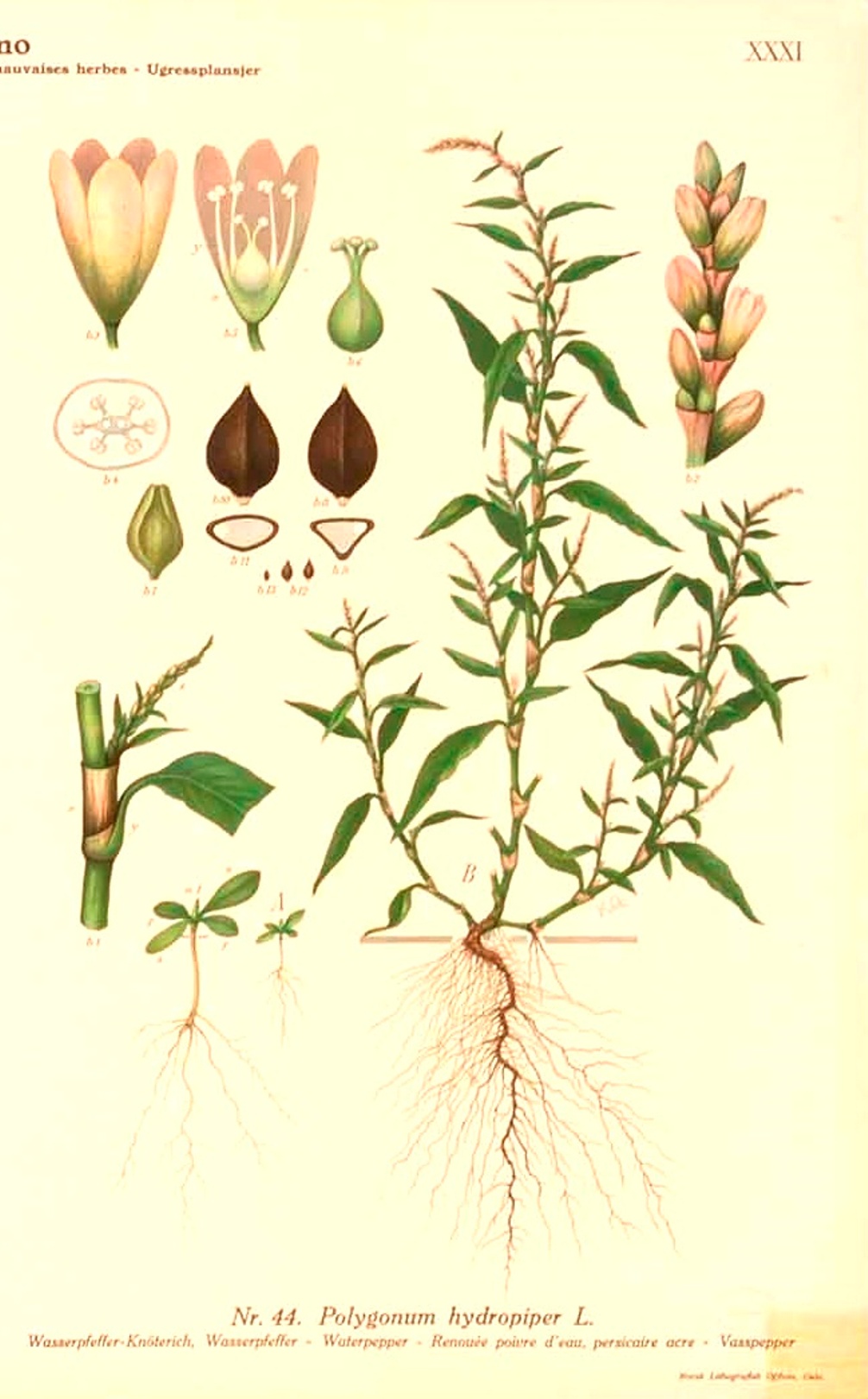 Description –
Persicaria hydropiper is an annual herbaceous plant, up to 70 cm tall.
It has an erect or hairless and branchy ascending stem sometimes rooting in the lower nodes.
The leaves, with a spicy flavor, are bright green, lanceolate or oblong-lanceolate, attenuated in a short petiole, with reddish sheaths equipped with some long lashes.
The inflorescence is a thin, loose, arched-hanging spike; the flowers are greenish-white at times pink, axillary to the sheath, in groups of 1-3, supported by pedicels longer than the sheath itself, perianth covered with small glandular points.
The antesis is between July and October.
The fruit is a diclesium with a perianth of 3-4 mm that encloses the anthocarp (achene) of (2,5) 3 – 3,5 mm, trine or flat on one side and keeled-convex on the other, sharp, brownish .

Cultivation –
Persicaria hydropiper is an annual plant that is harvested in nature for local use as a medicine and food.
It is a plant that is however grown in Japan for its edible leaves.
For its cultivation it must be in the presence of humid soils or with the presence of shallow water and it grows in most soils as long as they are not shaded.
The plant can be propagated by seed which can be sown directly in the open field or, previously, in pots immersed in water and then transplanted.
Germination is generally abundant.

Customs and Traditions –
Persicaria hydropiper is a plant that has been used for both food and medicinal purposes for a long time.
For edible use, both the leaves and the raw or cooked stems are used. It has a very spicy, strong and peppery flavor.
These parts can also be made into a peppery seasoning.
The seed can be eaten raw or cooked. It is quite small and impractical to use but is used as a condiment instead of pepper.
Sprouted seeds or young seedlings can be used as a garnish or added to salads and are commonly sold in Japanese markets.
For medicinal use it has a long history in both eastern and western herbal medicine. It is not used very often, and is seen more as a home remedy appreciated above all for its astringent properties which make it useful in the treatment of bleeding, skin problems, diarrhea, etc.
The leaves are anti-inflammatory, astringent, carminative, diaphoretic, diuretic, emmenagogue, stimulant, stomachic, haemostatic.
Pounded or shredded leaves are used as a poultice and as a remedy for toothache.
The whole plant, alone or mixed with other herbs, is decocted and used in the treatment of a wide range of ailments including diarrhea, dyspepsia, itchy skin, excessive menstruation and hemorrhoids.
A poultice from the plant is used in the treatment of swollen and inflamed areas.
In Chinese tests, the plant ranked 20th in a survey of 250 potential anti-fertility drugs.
The seed is carminative, diuretic and stimulating.
The root is bitter, stimulating and tonic.
From the leaves, among other things, a homeopathic remedy is obtained which is used in the treatment of hemorrhoids, menstrual pain and other menstrual disorders.
The leaves contain rutin, which helps strengthen fragile capillaries and thus helps prevent bleeding.
The leaves contain about 7.5% of proteins, 1.9% of fats, 8% of carbohydrates, 2% of ashes.
In general, the whole plant has several active ingredients. There are two bicyclic sesquiterpenoids, polygodial (tadeonal, an unsaturated dialdehyde with a straight skeleton), and warburganal, which gives it its pungent flavor. The whole plant contains rutin, which gives the bitter taste.
It also contains an essential oil (0.5%) consisting of monoterpenoids and sesquiterpenoids: α-pinene, β-pinene, 1,4-cineol, fencione, α-umulene, β-caryophyllene, trans-β-bergamotene. Carboxylic acids (cinnamic, valeric and caproic acids) and their esters were present in trace amounts. However, the composition strongly depends on genetic factors and therefore on the variable of the varieties.
Among other uses, it should be remembered that a yellow-gold dye is obtained from the stems.
In addition, this plant produces oils that cause skin irritation.
The plant contains many acids, including formic acid, which makes it unpleasant for livestock. Although animals do not eat it some insects do, giving rise to the Japanese saying “Tade kuu mushi mo sukizuki” (蓼 食 う 虫 も 好 き 好 き “Some insects eat water pepper and like it”), which can be translated as ” Taste is not taken into account “or” Some prefer nettles “.
The leaves are used as a poison for fish.

Preparation Method –
Water pepper is a plant that is consumed in Japan, where it is known as tade (蓼), or more specifically, yanagi tade (柳 蓼). The leaves are (of any culture) are used as a vegetable.
The herb is usually sold in markets as seedlings. The young red shoots are known asbene-tade (紅 蓼), and are used to garnish sashimi, tempura and sushi. It is popular for summer cooking. The seeds can also be added to wasabi.
Water pepper sauce, known as tade-zu (蓼 酢), is a sauce traditionally made from finely chopped water pepper leaves, soaked in vinegar and a small amount of steamed rice. From time to time, the juice of a squeezed kabosu is added. In Japanese cuisine it is traditionally used as a complement to grilled freshwater fish, but not saltwater fish.
In China, water pepper is known as liao (辣 蓼), and is used in traditional Chinese medicine.
In Europe, too, water pepper was once cultivated and consumed in wartime as a substitute for pepper.
For medicinal use the crushed or shredded leaves are used as a poultice and as a remedy for toothache.
From the whole plant, alone or mixed with other herbs, decoctions are obtained which are used in the treatment of a wide range of ailments.
A poultice is obtained from the plant which is used in the treatment of inflammations.