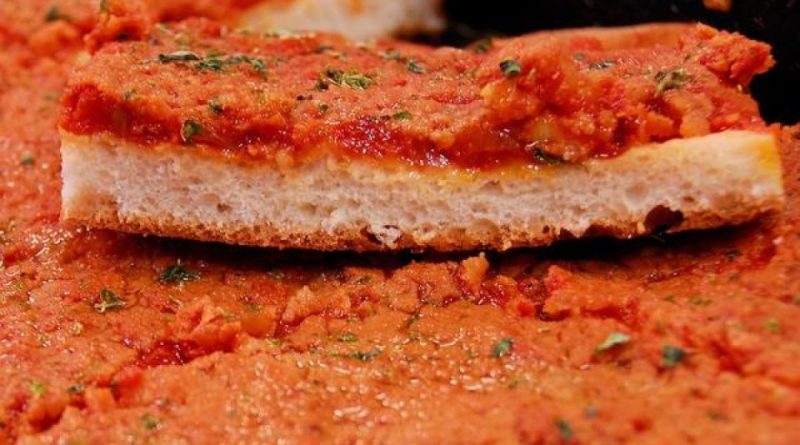 The sfincione (in Sicilian sfinciuni or spinciuni) is a typical product of Palermo gastronomy, included in the list of traditional Italian food products (P.A.T.) of the Ministry of Agricultural, Food and Forestry Policies (MiPAAF).

Origins and History –
The origin of the sfincione, like many stories related to gastronomy, is a mixture of history and legends.
According to some sources, its name means sponge and seems to be the result of a contamination between Latin, Greek and Arabic. In fact, like the sfincia of San Giuseppe, the name derives from the Latin spongia and from the Greek spòngos, σπόγγος, that is “sponge”, or from the Arabic ﺍﺴﻔﻨﺞ isfanǧ with which it indicates a pastry pan sweetened with honey. It is an ancient recipe that sees as a key ingredient the pizza bread (soft and leavened, similar to a sponge) with a sauce based on tomato, onion, anchovies, oregano and pieces of typical Sicilian cheese (called Ragusano caciocavallo ).
Tradition has it that the sfincione was invented by some nuns of the monastery of San Vito in Palermo and that it arose from the need to present a dish different from the usual bread that was eaten every day for the holidays. It was therefore decided to combine the bread with a series of condiments typical of peasant cuisine.
In the Sicilian tradition it was prepared at home by housewives only on the eve of the Christmas holidays, or when preparing for the so-called rendezvous, or the engagement party in the bride’s house. Fortunately for those with a sweet tooth, for several years now the sfincione has become a consumable product even in everyday life.
Today, in fact, walking through the Palermo neighborhoods it will not be difficult to come across the typical itinerant carts (also known as lapini) that sell sfincione at any time of day. His arrival in the streets is often accompanied by a chant that praises the delicacy in the megaphone: “Chissu è sfinciuni. Beautiful workmanship vieru. Who ciavuru. Uora ‘u sfuinnavu. Uora ‘u sfuinnavu. Scarsu r’uogghiu e chinu ri pruvulazzu “and so on.
However, even if today it is possible to find it all year round on the streets and in the rotisseries of the province of Palermo, the sfincione still remains strongly anchored to the Christmas tradition, remaining one of the typical dishes of every eve.
There is also a white variant, typical of the town of Bagheria (PA), and which takes the name of Sfincione bianco as it provides, in place of the tomato sauce, the addition of tuma (or fresh ricotta) and breadcrumbs. This product was elected by the Bagherese community as a representative dish.

Geographic area –
The sfincione is a typical product of Palermo gastronomy and over time has become a symbol of the culture of “street food” in Palermo.
Its production area is limited to the city of Palermo and to some neighboring municipalities such as Bagheria where there is the variant of the White sfincione di Bagheria.

Raw material –
The sfincione is a culinary product made up of a base of pizza dough topped with tomato sauce, onions, anchovies, oregano and, to top it off, pieces of Ragusan caciocavallo. To make it even more succulent, the dough is artfully leavened in order to give it softness and height, the main characteristics of this dish.
To the red variant typical of Palermo, the white one known as Sfincione di Bagheria is added. Lovers of cheese will be super enthusiastic because, in the absence of red gold, we find fragrant tuma and ricotta, combined with the inevitable onion and breadcrumbs topped with cheese.

Description –
The sfincione looks like a square but higher and of variable shape also depending on the trays where it is prepared.
In street food production, through street vendors, it is also found in the most reduced and round shape and also in the simplest form (sfincionello) or rectangular cut into pieces.
However, the proportions of the thickness and the softness of the pasta do not vary with the sauce based on tomato sauce, onions, anchovies, etc. on top.

Production Method –
The preparation of sfincione even if it is not yet characterized by a real disciplinary
The typical ingredients to prepare the Palermo sfincione are:
– 1500 gr of Sicilian remilled durum wheat semolina;
– 700 ml of water;
– 10 gr of brewer’s yeast;
– 15 grams of salt;
For the sauce
– 800 gr of peeled tomatoes;
– 10 desalted and boneless anchovies;
– 3 onions;
– oregano to taste;
– salt q. b .;
– extra virgin olive oil q. b .;
– Ragusan caciocavallo q. b ..
The procedure begins by putting the semolina, salt and half of the water indicated in a very large bowl, starting to knead. The yeast is combined with the remaining water and kneaded until a smooth and homogeneous dough is obtained. It is left to rise in mass (perhaps in the refrigerator sealed with cling film) for about 24 hours. After that, once the dough has been diluted at room temperature, it is started to roll it out into the trays. It is left to rise for about a couple of hours and seasoned (all raw) in the following order: tomato, thinly sliced ​​onions, oregano, anchovies, a little more tomato to cover, coarse grated caciocavallo and extra virgin olive oil. It is left to rise for another half hour and bake at 250 ° C for about 20 minutes in the convection oven. Time varies from oven to oven, using your own experience. Obviously in the procedure there are small variations of the method but the result still leads to a fairly similar product.

Gastronomic use –
The sfincione, as mentioned, is a typical product and anchored to the Christmas tradition, remaining one of the typical dishes of every eve.
However, over time it has spread and marketed through takeaways and street vendors who sell it all year round.
Its consumption often sees it as a central food during the holidays or as a use in the morning or afternoon when consumed as street food.
If consumed in the family, sfincione goes well with a good red wine, such as Nero d’Avola. It is recommended to consume it at a serving temperature between 16 and 18 degrees.
If consumed as street food it is also accompanied well with beer.