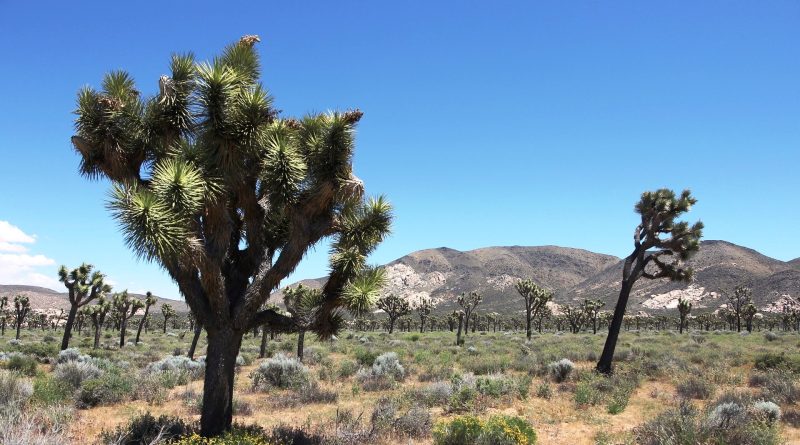 Joshua Tree National Park, whose WDPA Code is: 370321 is a United States National Park located in the State of California.
The name derives from the Yucca tree (Yucca brevifolia Engelm., 1871), also called Joshua Tree.
This park has an area of ​​3,199.59 km² and is managed by the National Park Service.
Originally the park was established as a national monument (August 10, 1936) and extended over a smaller area. The decision to turn it into a national park was made following the strong activism of Minerva Hoyt who fought to persuade the state and federal government to protect the area.
The establishment as a national park took place on October 31, 1994, with the promulgation of the California Desert Protection Act which on the occasion added approximately 947 km2 to the original extension of the park.

Geology-
Joshua Tree National Park is characterized by rock formations that originated more than 100 million years ago following the cooling of magma below the surface and which gave rise to the formation of monzogranites, characterized by right-angled junctions. The groundwater that filtered through the joints caused the erosion of the sharp edges with the formation of rounded stones; short and rapid floods of the waters led to the removal of the covering soil leaving accumulations of boulders. These outcrops are known as monadnocks or inselbergs.

Climate –
The climate of Joshua Tree National Park is of the subtropical desert type, with mild winters and very hot summers, and with the sun shining all year round.
We are in the southern part of the Mojave Desert. The landscape is varied, sometimes rocky and sometimes sandy, and characterized by hills, plateaus and canyons. There are also oases, due to the water that escapes from the subsoil, pushed by seismic faults.
In winter, the days are generally mild and sunny, but at night it can get cold. On the coldest nights of the year, the temperature generally drops slightly below freezing. Occasionally there may be short cold periods, in which the temperature remains below 10 ° C even during the day. Above 1,000 meters, of course, it gets cold more often, and at the worst times it can drop below -10 ° C. It can even snow in the mountains.
Below 1,000 meters, the summer is hot and at the worst times the temperature can exceed 45 ° C.
At the Cottonwood Visitor Center, located in the southern part of the park and at 940 meters above sea level, the maximum temperatures in July and August are 36-37 ° C, but at lower altitudes, temperatures normally exceed 40 ° C.

Flora –
Joshua Tree National Park is renowned for its plant diversity – nearly 800 species of vascular plants are found here. Nearly half of these are annuals, as are many of the wildflowers that bloom in spring.
From lavender and desert creosote to palm and pine trees, the park has a spectacular number of trees and shrubs. The shrub formations here are among the most diverse vegetation types in North America. Joshua Tree is also known for its many species of cacti and rare plants.
The park is home to many species of ferns, mosses and liverworts, also known as bryophytes. Many lichen species are easily found growing on the park’s famous rock formations.
The diversity of plant life found in Joshua Tree National Park offers ample opportunities for study and enjoyment. The park’s herbarium documents almost all the plants found here. Herbarium records are available for online research.
With a spectacular diversity of plants and plant communities, it is no wonder that the original name proposed for this area in the 1930s was Desert Plants National Park.
Additionally, Joshua Tree National Park is home to two deserts: the Colorado Desert and the Mojave Desert. These areas are occupied by different combinations of vegetation. The Colorado Desert, a western extension of the vast Sonoran Desert, occupies the southern and eastern parts of the park. It features thickets of ocotillo plants, ironwood trees, green pole trees, and some cactus species. The southern border of the Mojave Desert passes through the park. It is the habitat of the homonymous park plant: the Joshua tree (Yucca brevifolia Engelm., 1871). Large formations of this particular-looking plant can be found in the western half of the park. The park has a third primary ecosystem located in the westernmost part of the park above 1,220 meters. The Little San Bernardino Mountains provide habitat for a community of California juniper, Muller oak, and pinyon pine.
Joshua Tree’s native vegetation communities are threatened by a variety of stressors. Urban sprawl around the park adds to habitat fragmentation and the increased threat of invasive plants. The high nitrogen content of the soil is causing non-native grasses to increase at the expense of native vegetation. Non-native plants modify the composition and diversity of plant communities. They also decrease the availability of water and can increase fuel loads and the risk of fire. More herb coverage can increase the size, frequency and intensity of the fire. Many native plant species are unsuitable for fire and recovery is slow or even non-existent. Park staff estimate that invasive plants exist in most of the park. There are also invasive pests, such as tree-eating beetles, which may enter the park due to the transportation of firewood. The threat of invasive plants is likely to increase from the cumulative effect of many other resource stressors: increased border invasion, regional development, climate change, and social vectors. Climate change exacerbates the effects of most stressors on native vegetation. With a warmer, drier climate an increase in mortality of Joshua trees, pinyon pine and other sensitive vegetation in the park is expected.

Fauna –
With approximately 3,200 km2 of extension and altitudes ranging from 163 m to 1,773 m, Joshua Tree National Park includes a variety of habitats: oases, sand dunes, valleys and mountains. These habitats are home to a wide variety of wildlife including 350 vertebrate species. Many of these species have specialized desert adaptations to help them thrive in a hot, dry climate.
The park is home to 52 species of mammals. Some of the most common species are white-tailed antelope ground squirrels, kangaroo rats, and coyotes. Rarer species to see include the fox, bobcat, bighorn sheep, and mule deer. Some of these mammals mainly come out at night like the 16 bat species present.
Joshua Tree National Park is home to 46 different reptile species including lizards, snakes, and the desert tortoise. Some of the more commonly seen reptiles are lizards, including the spiny desert lizards. Snakes are less common, but 26 species live in the park. Rattlesnakes alone represent seven of the snake species. Desert turtles were once an abundant species in the park, but their populations are in sharp decline. They are now classified as federally threatened species.
As for birdlife, over 250 bird species have been recorded in the park. Some are year-round resident, some stay for a season to mate and nest, and some simply make a stop on their migratory journey. Commonly seen residents include crows, gambel’s quail, red-tailed hawks, and road runners. Joshua Tree National Park is located along the Pacific Flyway, a migratory flight route that stretches from Alaska to South America. The park is home to migratory birds, tanagers, orioles and occasionally ducks, geese and shorebirds.
Despite having few water sources, the park is home to two species of amphibians: the California tree frog and the red-spotted toad. Both species are visible in spring after winter rains and in summer after monsoon storms.
There are thousands of arthropod species. This includes insects, arachnids (spiders and scorpions) and myriapods (millipedes and millipedes). These invertebrate species represent a vast world of life that often goes unnoticed to the human eye.
Unfortunately, many of the animal species are suffering the negative impact of human-caused climate change.