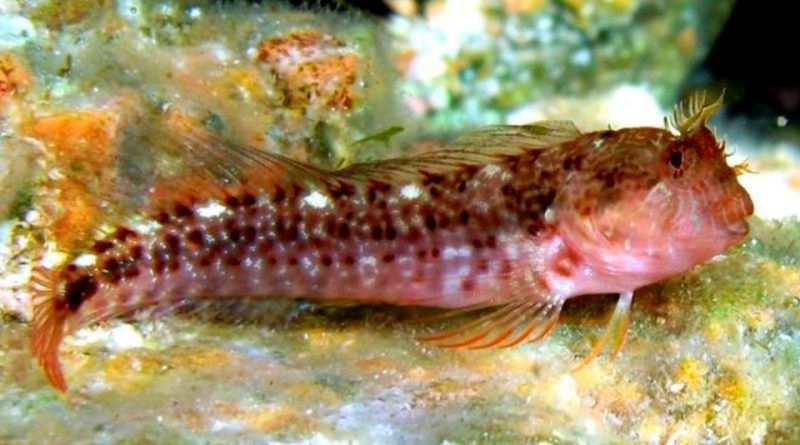 Geographic Distribution and Habitat –
The Zvonimir’s blenny is an endemic species of the Mediterranean and Black seas.
In Italy it is present in all coastal marine waters.
It is a demersal species whose habitat is that of rocky environments rich in shelters and vegetation, preferring shaded environments at a depth of at least 1 meter.

Description –
The Parablennius zvonimiri is recognized for having a body enlarged in the anterior half and compressed at the sides in the posterior one which reaches 8 cm.
It has a supraorbital tentacle (more developed in males) branched in 4-6 filaments starting from the base or starting from a short common tract, longer and thicker than the anterior filament. Short tentacle divided in correspondence of the anterior nostril; in adults also short tentacles in correspondence of the posterior nostril (placed in the area in front of the eyes) and others between the eyes and the nape of the neck.
The dorsal fin has a notch in the middle of its length.
The color is brown, sometimes red-brick in the males, with 6-8 white or yellowish spots on the back and dark bands on the sides; a dark spot on the caudal peduncle.
It is distinguished from Parablennius incognitus by the clearly visible white spots on the back, the lack of a clear oblique line on the cheek and the presence of short tentacles on the posterior nostril and between the eyes and the nape of the neck in adults.

Biology –
Adults inhabit poorly lit biotopes such as overhanging rocks or caves. It is an oviapara species and the eggs are demersal and adhesive and are attached to the substrate via a filamentous, adhesive pad or pedestal.
Courtship manifests itself as a rearing of the body.
After mating, the female lays her eggs inside an empty mussel; the male takes care of the preparation of the nest, but also its care and custody and protects the brood.
Newborns are planktonic, often found in shallow coastal waters.

Ecological Role –
The Parablennius zvonimiri, like other blenny, lives in shallow waters, spending most of its time with its body in the ravines and its head alert and curious to observe the environment. For this reason it is an excellent shooting subject for underwater photography.
The diet is omnivorous and is an easy fish to keep in the aquarium.
According to the IUCN Red List this species is considered Least Concern (LC).