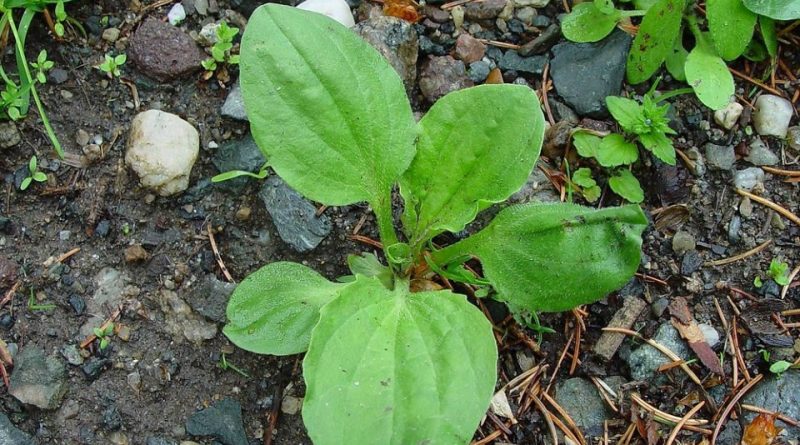 The Common Plantain (Plantago major L., 1753) is a herbaceous species belonging to the Plantaginaceae family.

Etymology –
The term Plantago comes from plánta sole of the foot: similar to the sole of the foot, referring to the size of the leaves of the greater plantain.
The specific major epithet is an incorrect orthographic form, but valid, for maior, us, a comparative of magnus grande: greater, larger or longer (compared to other species of the same genus).

Geographic Distribution and Habitat –
The Common Plantain is a species originally distributed in Eurosiberian but has now become sub cosmopolitan. The species is present throughout central and northern Europe and in Asia, while in other parts of the world (such as in America) it has easily naturalized.
In Italy it is present in all regions.
Its habitat is that of semi-natural herbaceous vegetation and above all in trampled ruderal environments, on loamy-clayey soils that are quite fresh in depth and rich in nitrogen compounds, from sea level up to the upper mountain belt. 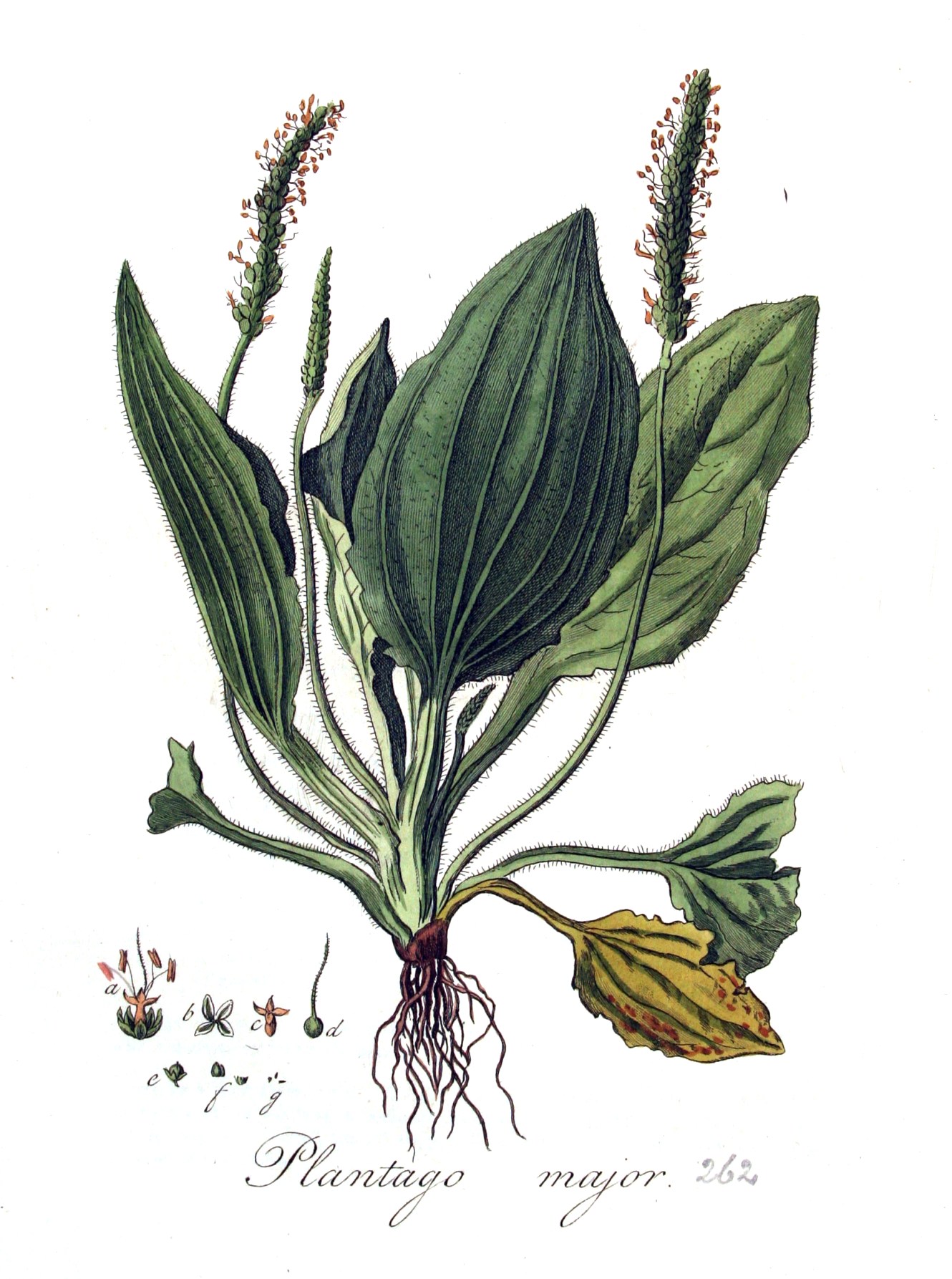 Description –
Plantago major is a perennial herbaceous plant with a 15-30 cm diameter rosette of leaves.
Each leaf is oval in shape, 5-20 cm long and 4-9 cm broad, rarely up to 30 cm long and 17 cm broad, with an acute apex, a smooth margin and a distinct petiole almost as long as the leaf itself. There are five to nine conspicuous veins along the length of the leaf.
The flowers are small, greenish-brown in color with purple stamens, produced in a dense 5-15 cm long tip carried on top of a 13-15 cm high and rarely 70 cm high stem.
The fruit is a pyxium with transverse dehiscence, ovoid, 2-4.5 x 1.5-2.8 mm, with numerous seeds of 1.4-1.6 x 0.5 mm, hemiellipsoid or polyhedral, brown, with flat inner surface.
The seeds are very small and oval in shape, with a bitter taste.

Cultivation –
Plantago major is a wind pollinated plant and is mainly propagated by seeds. Each plant can produce up to 20,000 seeds.
The plant is harvested in nature for local use, mainly as a medicine but also as a food. It is occasionally grown as a medicinal herb and is also sometimes marketed.
However, care should be taken when harvesting Plantago major in the wild for medicinal or edible purposes, as the plants can contain high concentrations of heavy metals such as lead and cadmium, especially if they are growing along the roads.
This plant grows in any moderately fertile soil and in a sunny position. It tolerates water stagnation, compacted soils and trampling.
Its spread all over the world is linked to its resistance and also through human activity. Its seeds easily adhere to animals or people through their mucilaginous integument which favors their dispersion. They can also be transported by water.
Although it is a predominantly spontaneous herb, some varieties have been selected for their ornamental value.
Propagation occurs by seed, with sowing directly in the open field. Germination is best at temperatures of 25 – 30 ° C and with a long photoperiod (16 hours).
The seed is known to remain viable for more than 60 years in the soil.

Preparation Method –
The Common Plantain is a plant that is used both as a food plant, as a medicine and for various other uses.
For food use, the young, raw or cooked leaves can be consumed. It is also better not to use the petiole as this is even more fibrous than the leaf. Many people blanch the leaves in boiling water before using them in salads to make them more tender.
The seed can also be eaten raw or cooked, and it can also be ground and mixed with flour. Whole seeds can be boiled and used like sago.
The seed mucilage is an excellent thickener and is used as a stabilizer in the ice cream industry and in the preparation of chocolate.
An acceptable tea is made from the dried leaves.
The root has a sweet and salty taste.
For medicinal use, both the leaves, the seeds and the roots are used, preparing various decoctions or products for distillation.
Finally, due to the presence of mucilage, both the seeds and other parts of the plant are used both in the pharmaceutical, food or industrial fields.

One thought on “Plantago major”