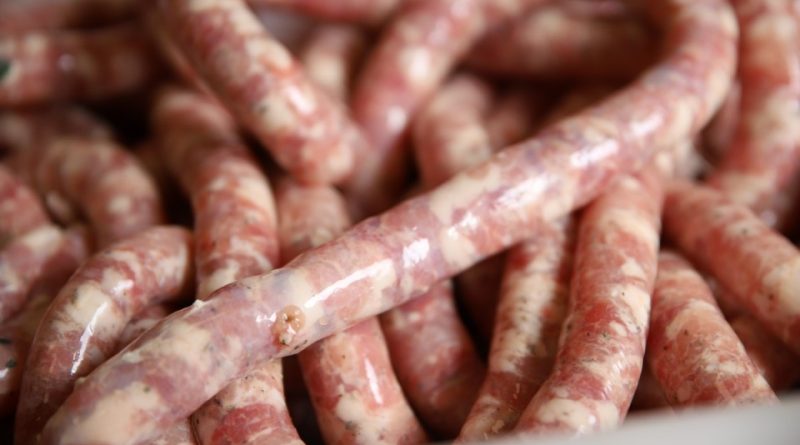 The pasqualora sausage is a typical Sicilian pork sausage and is a product included in the list of traditional Italian food products (P.A.T) of the Ministry of Agricultural, Food and Forestry Policies (Mipaaf).

Origins and History –
The name of pasqualora sausage derives from the custom of reserving some cuts of pork butchered during the Holy Week of Easter for bagging and subsequent summer consumption.
In ancient times, families slaughtered two pigs, one at Christmas and one at Carnival. At Carnival, with the approach of Lent in which no meat was eaten, the sausage that remained was spread out in reeds to dry on dead roofs. With the arrival of Easter, there was a celebration with the slicing of this dried product.
The preparation of this sausage is very old; they already knew it in Roman times; in fact, the tradition of this type of sausage dates back to over two millennia ago, because it was the only way to preserve the meat up to two months after slaughter, as the poet Virgil told in his “Georgics”.

Geographic area –
The pasqualora sausage, as mentioned, is recognized as Sicilian P.A.T and is native to the municipalities of Trapani, Erice, Valderice, Paceco, Calatafimi, Alcamo, Castellammare del Golfo, Buseto Palizzolo, San Vito Lo Capo, Custonaci. However, its preparation is also widespread throughout the rest of Sicily, especially in the mountainous areas. In addition, there is also the Pasqualora Caccamese or Caccamo sausage in the province of Palermo which has been included in the Slow Food ark of taste.

Raw material –
The pasqualora sausage is a sausage made of pork only cut with a knife tip and ground with a plate with large holes produced with the addition of salt (30 grams per kilo) black pepper (5 grams per kilo), chilli, white wine and wild fennel seeds.

Description –
The pasqualora sausage looks like a cured meat stuffed into natural casing, tied with strips of dwarf palm leaves. The external color is opaque red or ash white with an internal aspect of the coarsely ground pulp.
When cut, the Sicilian sausage is bright red in color, the consistency changes depending on the maturation which takes up to two weeks: it is tender when fresh and gradually becomes more compact with the passage of time. Its aroma is intense and aromatic in both the sweet and spicy versions, with the addition of chilli.

Production Method –
To produce the Pasqualora sausage we start with the processing of selected meats, the noble parts of the pig (the meat is produced from March to May), with the tip of a knife or minced into large holes.
In detail, the pork cuts are ground with a plate with fairly large holes and kneaded by hand, with the addition of a few sprinkles of white wine and spices: 30 g / kg of salt and 5 g / kg of black pepper with country fennel seeds and a few grams of red pepper. After being stuffed into natural pork or lamb casing, the Pasqualora sausage is tied in elongated touches with a string or, as in the past, with strips of dwarf palm leaves. After binding, the product is left to mature for one or two weeks in a cool and ventilated place.
Precisely due to the processing technique this sausage is less fat than other qualities. Before being stuffed and cured, the Pasqualora is flavored with sea salt, a mixture of black and white pepper, white wine, crushed red pepper and wild fennel seeds.

Gastronomic use –
Once produced, the pasqualora sausage is aged for one or two weeks. In addition to being cooked on the grill, it is mainly eaten raw as if it were a salami and has an elongated “U” shape.
It is excellent consumed as an appetizer, raw with bread, cooked on the grill, but also as an ingredient in rich sauces to season pasta. In the Trapani area it is offered in the tasty pasta with Pasqualora sausage stew.
As for the combinations, it is excellent if cooked on the grill, wrapped in aluminum foil or, as in the past, in greaseproof paper and placed in the middle of hot ash where it acquires a particular taste and smell; generally it is accompanied with a full-bodied Sicilian Red wine. If eaten raw with a white wine from Belice.