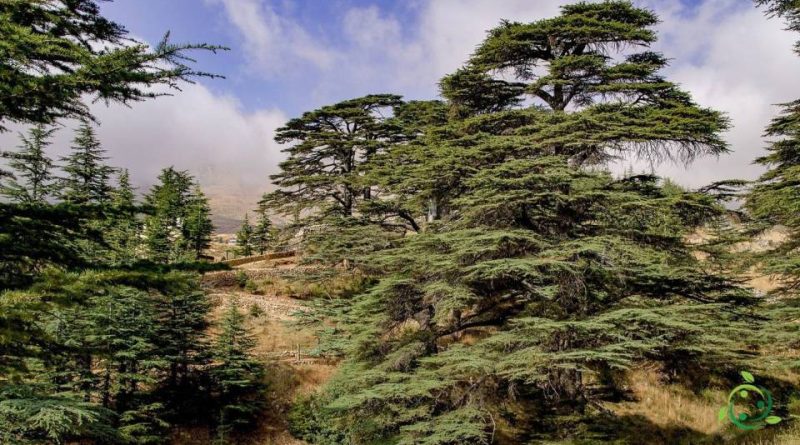 The cedar of Lebanon (Cedrus libani, A.Rich. 1823) is a conifer of the Pinaceae family native to southern Anatolia, Syria and Lebanon.

Suitable breeding habitat –
Cedrus libani is an endemic plant of the mountains around the eastern Mediterranean area in Lebanon, Syria and Turkey. The tree grows in well-drained limestone lithosols on rocky slopes and ridges facing north and west.
Its natural habitat is characterized by hot and dry summers and cool and humid winters with annual rainfall from 1,000 to 1,500 mm; at higher altitudes the trees are covered with a heavy snow cover. In Lebanon and Turkey it is more present at altitudes from 1,300 to 3,000 m, where it forms pure forests or mixed woods with Cilician fir (Abies cilicica), European black pine (Pinus nigra), Turkish pine (Pinus brutia) and various species of juniper. In Turkey we find it up to 500 m. s.l.m ..
Today in its original environment there are few examples, while it is widespread in parks and gardens throughout Europe where it arrived in the seventeenth century.
This species, thousands of years ago, formed vast forests that covered the mountain slopes of the entire Near East, including Cyprus and Lebanon; today in its area of ​​origin in the chain of Mount Lebanon and in the valley of the cedars in Cyprus only a few hundred specimens survive.
The Cedrus libani, due to its historicity, is represented in the flag of Lebanon.

Propagation –
For the cultivation of Cedrus libani, it should be taken into account that it is a very cold-resistant plant, able to tolerate temperatures down to about -25 ° C when it is completely dormant, as long as the new vegetation is stimulated by the summer heat.
The plant needs cool, humid winters, with abundant snowfall at the highest altitudes of its range.
It also grows in hot and dry areas with less than 400 mm of rain per year, but also in areas with cool summers and up to 2,000 m of rain.
As for pedology, it grows in most well-drained soils, being very tolerant to chalk, arid sites and drought once it is established.
On the other hand, it is very intolerant to air pollution.
Propagation can take place by seed which is collected with cones, in winter, and kept in a warm environment until they open. Once opened, the seeds must be removed and immediately sown in the cold.
A short one month cold stratification improves germination rates. The seedbed must be kept humid and ventilated. Once the seedlings have emerged, they must be grown until they are manageable and transplanted in a cold greenhouse for their first winter.
The definitive transplant must be carried out in late spring or early summer. It is advisable to protect the seedlings from the winter cold for the first two winters.
Agamic propagation can also be attempted, through cuttings of terminal shoots that can be rooted in the greenhouse in late autumn even if the percentage of rooting is very low.
Remember that small trees less than 50 cm high claim much faster and better than taller trees, those taller than 2 meters have greater difficulties.

Ecology –
The cedar of Lebanon, over the centuries, has undergone a strong decline so that extensive deforestation has occurred, of which only small remains of the original forests have survived. Deforestation has been particularly severe in Lebanon and Cyprus; in Cyprus only small trees up to 25 m high survive, although Pliny the Elder recorded cedars 40 m high. Various attempts have been made at certain times throughout history to preserve the cedars of Lebanon. The first was built by the Roman emperor Hadrian; he created an imperial forest and marked it with inscribed boundary stones, two of which are in the museum of the American University of Beirut.
In the Mediterranean region, extensive reforestation of cedar is carried out. In Turkey, over 50 million young cedars are planted annually, over an area of ​​approximately 300 square kilometers.
The Lebanese cedar populations are also expanding through an active program. The Lebanese approach emphasizes natural regeneration by creating suitable growing conditions. The Lebanese state has created several reserves, including the Chouf Cedar Reserve, the Jaj Cedar Reserve, the Tannourine Reserve, the Ammouaa and Karm Shbat Reserves in Akkar District and the Cedar of God Forest near Bsharri .
Because differentiating C. libani from C. atlantica or C. deodara during the planting phase is difficult, the American University of Beirut has developed a DNA-based identification method to ensure that reforestation efforts in Lebanon target Cedrus libani and not other species.