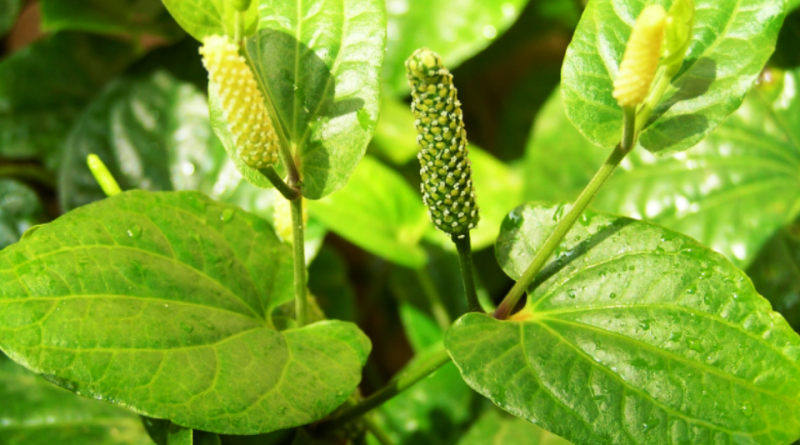 Etymology –
The term Piper comes from the Greek πέπερι péperi and from the Sanskrit píppali: pepper.
The specific longum epithet has long been: elongated, usually due to its posture and in this case the inflorescence.

Geographic Distribution and Habitat –
Piper longum is a plant native to an area between East Asia, India and Nepal and is particularly widespread from Tibet to southern China.
Its habitat is that of shady areas, rainforests, where it is found along streams and among bushes, at altitudes up to 800 meters in Nepal. 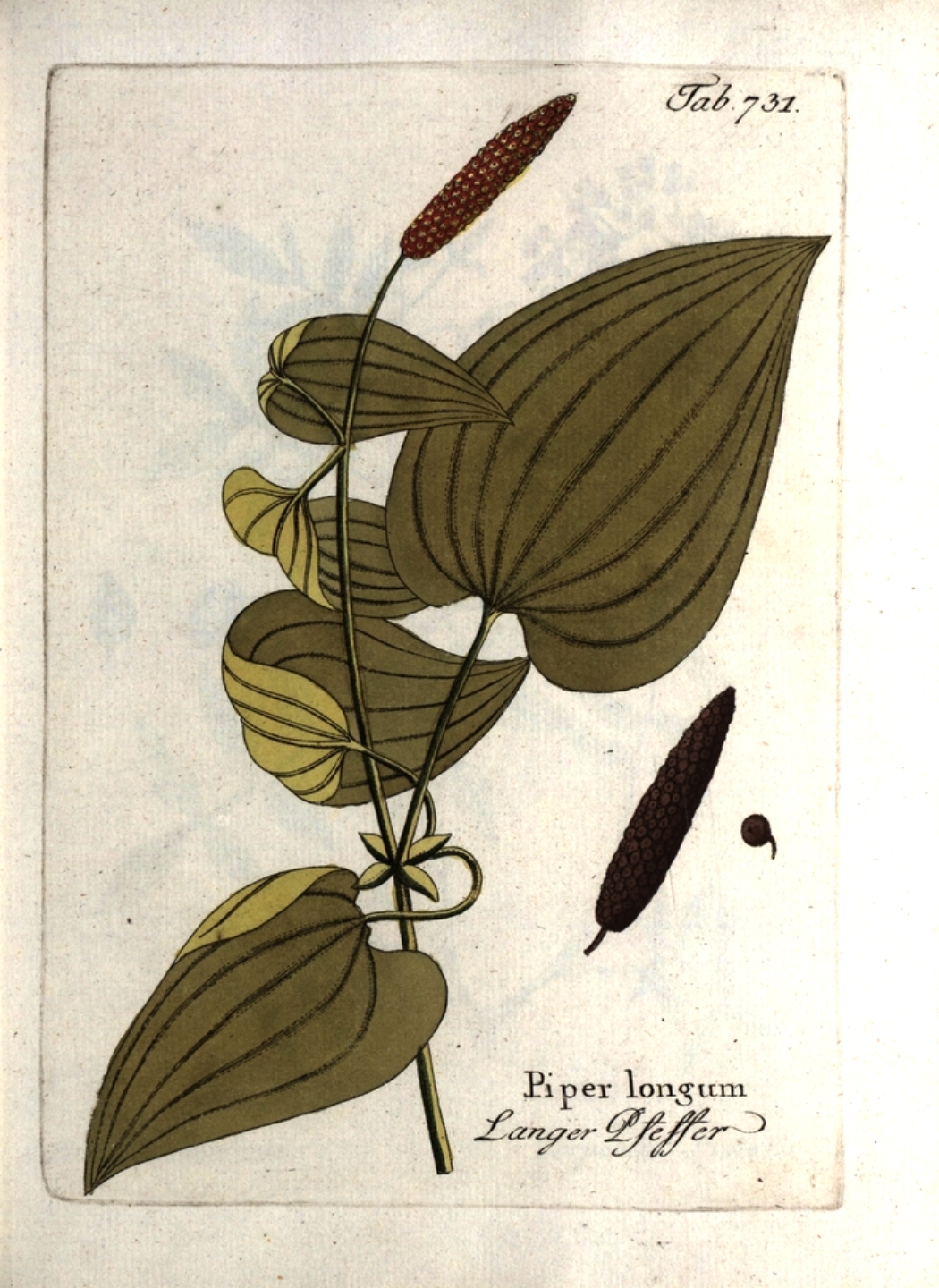 Description –
Piper longum is a shrubby and climbing plant that forms tortuous stems up to 3 meters long.
The leaves near the base of the stem are ovate to approximately reniform in shape and have long petioles up to 9 cm long. The leaves near the tip of the stem are ovate to ovate-oblong and have almost no petiole and hug the stem; these vary in size from 6-12cm in length and 3-12cm in width.
Male and female flowers are present on separate plants. The male flowers are arranged in a narrow spike inflorescence (4-5 cm long, 3 mm wide). The male flower has 2 stamens which have short stems and oval shaped anthers. The female flowers are also arranged in a spike inflorescence (1.5-2.5 cm long, 2.5-4 mm wide).
When the female spike inflorescence bears fruit, it becomes 2-3 cm long. The small round fruits contain a stony pit and are known as drupes (2mm wide). The long pepper fruit is made up of a set of small fruits, each the size of a poppy seed; which reside embedded in the surface of the inflorescence and reminds the catkins of hazelnut.

Cultivation –
The long pepper is a plant that grows spontaneously but is cultivated for its fruit, which is generally used dry as a spice and condiment.
The fruits are dried and used as a spice and condiment.
The plant is grown in various areas of tropical Asia to be used as a spice and as a medicinal plant.
For its cultivation it should be taken into account that it is a plant of the humid tropics and prefers a rich and well-drained soil in a slightly shaded position.
Propagation can take place both by seed and by semi-mature cuttings.

Customs and Traditions –
Long pepper is a plant known and used for various purposes since ancient times. the oldest reference comes from ancient Indian Ayurveda textbooks, where its medicinal and dietary uses are described in detail. It reached Greece in the 6th or 5th century BC, although Hippocrates referred to it as a medicine rather than a spice. Among the Greeks and Romans and before the European rediscovery of the American continents, long pepper was an important and well-known spice.
The ancient history of black pepper is often intertwined with (and confused with) that of long pepper, although Theophrastus distinguished the two in his earliest botanical work. The Romans knew both and often referred to both as pepper. Pliny mistakenly believed that dried black pepper and long pepper came from the same plant.
Round, or black, pepper began to compete with long pepper in Europe starting in the 12th century and had replaced it in the 14th century. The search for cheaper and more reliable sources of black pepper has fueled the era of discovery.
Only after the discovery of the American continents and chilli, called pimiento by the Spaniards, using their word for long pepper, did the popularity of long pepper diminish almost until it disappeared.
Chillies, some of which, when dried, are similar in shape and flavor to long pepper, were easier to grow in both varieties and more convenient climatic conditions for Europe.
Today, long pepper is a rarity in general trade.
In fact, although often used in medieval times in spice blends as “strong powder”, long pepper is today a very rare ingredient in European cuisines, but can still be found in Indian and Nepalese vegetable pickles, in some North African spice blends. and in Indonesian and Malay cuisine. It is readily available in Indian grocery stores, where it is usually labeled as pippali. Pippali is the main spice of Nihari, one of the national dishes of Pakistan and the Indian metropolis of Lucknow.
Long pepper is an important and common ingredient in many Ayurveda medicines.
Long pepper is a close relative of the black pepper plant and has a similar, albeit spicier, flavor.
The fruits of Piper longum contain the piperine alkaloid, which contributes to their spiciness.
The dried and unripe berries of this plant are used as a condiment in curries and pickles, and also as an adulterant of black pepper (Piper nigrum L.).
It is an ingredient in the Moroccan spice blends “ras el hanout” and “felfla harra”.
For medicinal use the fruit is aromatic, spicy and stimulating. It improves digestion and has decongestant, antibiotic and analgesic effects.
The fruit is used in traditional Chinese medicine, where it is known as bi ba.
It is taken internally to treat stomach chills, vomiting, acid regurgitation, headache and rhinitis.
In Ayurvedic medicine it is used to treat colds, asthma, bronchitis, arthritis, rheumatism, lumbago, sciatica, epilepsy, indigestion and wind.
For external use the fruit is used to treat toothache.
It is a main ingredient in various Ayurvedic tonic formulas, including Trikatu, Chyavanprash, and Amrit Kalash.
The root is considered to be diuretic, stimulant, and sweat-inducing.

Preparation Method –
Piper longum is a plant that is, as mentioned, used in the food and medicinal fields.
Both the fruits and the roots of this plant are used.
The fruits are dried and used as a spice and condiment and are harvested unripe and dried for later use.
They are used whole or ground according to the use to be made of them.