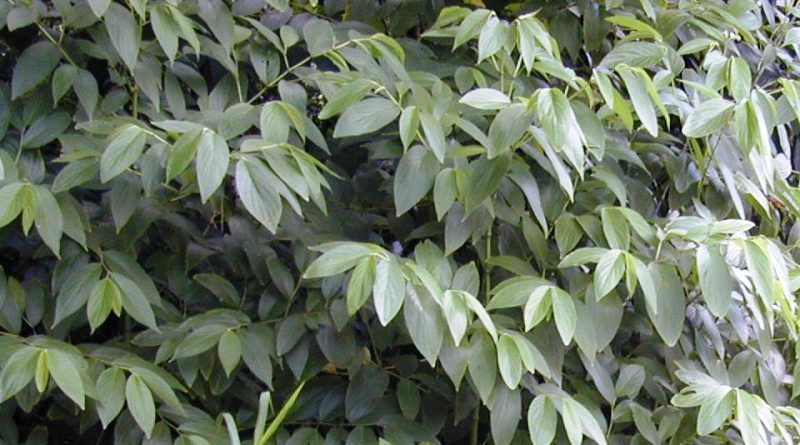 The spiked pepper (Piper aduncum L.) is an arboreal species belonging to the Piperaceae family.

Geographic Distribution and Habitat –
The Piper aduncum is a plant native to South America where it grows in Brazil, Bolivia and Peru, north of the Caribbean and through Central America to Mexico.
Its habitat is that of open or disturbed areas, roadsides, forest edges and along waterways, disturbed rainforest areas, forest edges and in inter-Andean valleys, up to 3,000 m above sea level. 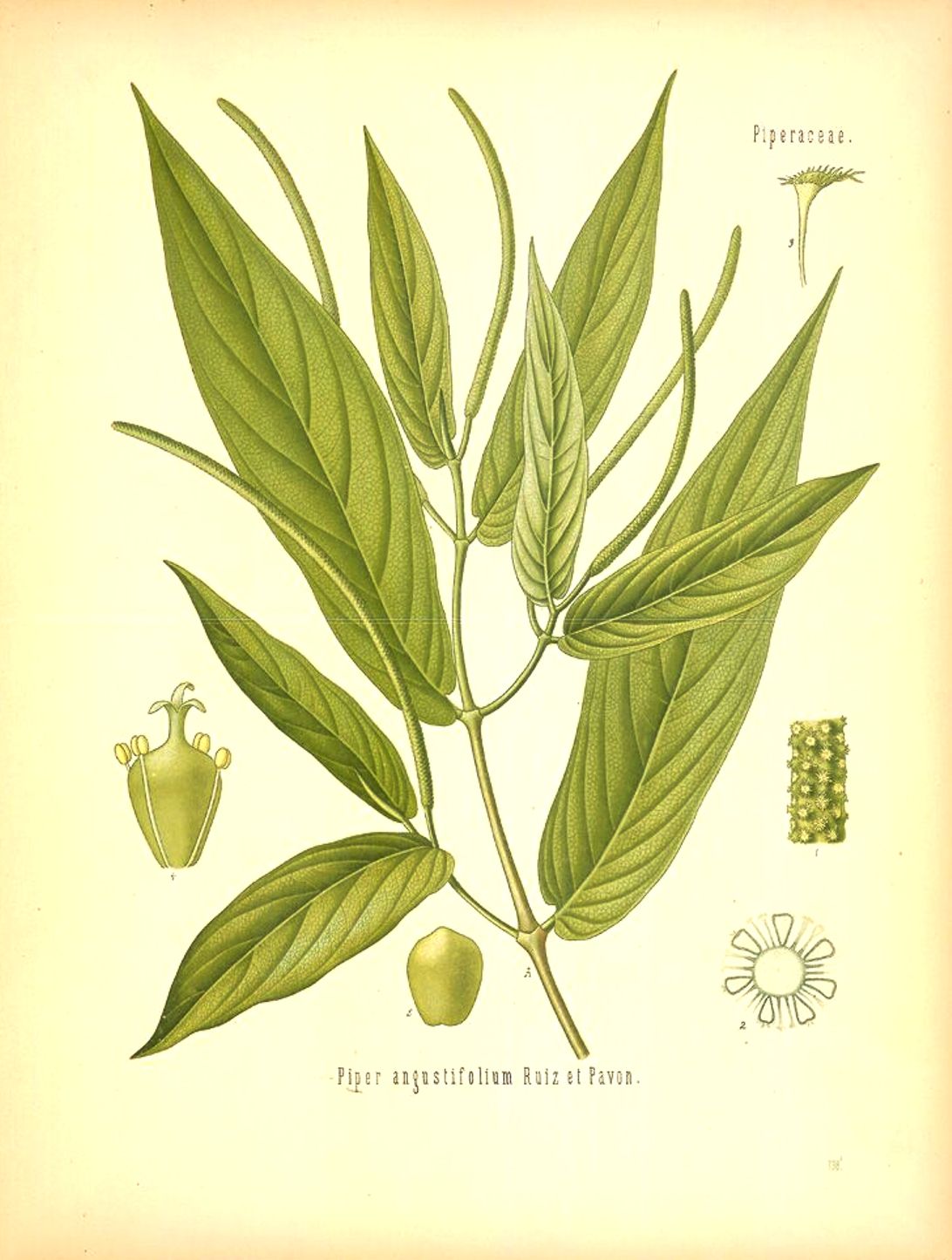 Description –
Spiked pepper is a tropical, evergreen plant in tree or shrub form that grows to a height of 6-7 meters.
The stem is woody, knotty, branched and light green or gray in color.
The leaves are light green, alternate, lanceolate with pointed apex, 12-20 cm long and 5-8 cm broad.
It has a catkin inflorescence, composed of small hermaphrodite flowers ranging in color from white to pale yellow.
The fruit is a small drupe with black seeds.

Cultivation –
Piper aduncum is a plant that grows spontaneously in many areas ranging from Central to South America.
This plant is grown in tropical Asia, Polynesia and Melanesia and can also be found in Florida, Hawaii and Puerto Rico. In some countries it is considered a weed; also in some parts of New Guinea, although this plant is known for its invasiveness, wood is still used by local residents for a myriad of uses as fuel and fence posts.
The plant is used in its natural state as a very popular herbal remedy; it is commonly collected in kind and sold locally. It is sometimes grown to provide ground cover, and the plant also has ornamental value.
For its cultivation it should be taken into account that, being a plant of tropical regions, which is found mainly at lower altitudes up to 1,000 meters, even if in some points it extends up to over 2,000 meters, it grows best in areas with an average annual rainfall. of 1,500 – 4,000 mm or more.
The plant is moderately intolerant to shade, as it needs at least partial exposure to sunlight to reach large sizes and bloom.
Colonizes most soils, with the exception of excessively drained soils (where it grows only at the upper limit of the rainfall range), dry soils and salty soils.
Instead, it easily invades disturbed areas, where it is able to form dense populations and spread through shoots and suckers.
The plant has spread through cultivation and has been naturalized in many areas including Southeast Asia, the Pacific, and North America. It has been declared a harmful herb in parts of North America and is a problem in some Pacific islands, where it can interfere with the harvest of the congener species kava (Piper methysticum G.Forst.).
The tree produces abundant flowering which is pollinated by the wind and which results in numerous tiny drupes with black seeds. The seeds are then easily spread by bats and birds. From these abundant seeds, it can form large shoals of fast-growing trees or shrubs that can drown out native vegetation.
The plants form thickenings that also propagate through suckers deriving from the crown of the root.
The plant can also flower and bear fruit all year round.
The propagation therefore takes place both by seed and by suckers but can also be implemented through cuttings.

Customs and Traditions –
Piper aduncum, like many species of the family, has a peppery smell.
According to the legends, the plant was discovered by a wounded Spanish soldier, named Matico; he learned, presumably from the local tribes, that by applying the leaves to his wounds they stopped bleeding; for this reason, probably, it began to be called “Matico” or “soldier’s weed”.
This plant was introduced into medicine in the United States and Europe by a Liverpool physician in 1839 as a hemostatic and astringent for wounds.
The fruits, leaves and seeds have a peppery flavor and aroma and the fruits are used as a spice, with a peppery flavor.
When they are black and ripe they taste very sweet.
The leaves also have an edible use; they are cooked and eaten like aromatic herbs.
However, the Piper aduncum also has, as mentioned, medicinal properties.
In fact, it has a long history of traditional medical use in South America, where it was appreciated above all for its antiseptic qualities and used to heal wounds, etc.
In the Amazon rainforest, many indigenous tribes use the leaves as an antiseptic. In Peru, this plant was used to stop bleeding and treat ulcers, and in European practice in the treatment of diseases of the genitals and urinary organs, such as those for which cubeb was often prescribed.
These uses were quickly adopted by incoming Europeans, and the plant has retained its role in modern herbal medicine.
Modern research has confirmed the presence of a range of medically active compounds in the plant, including flavonoids, sequiterpenes, monoterpenes, heterocycles, phenylpropanoids, alkaloids and benzenoids.
A group of chemicals called chromenes have been found in the leaves (and its essential oil) which have shown toxic effects on cancerous cells and bacteria.
Other chemicals, including a group of benzenoid chemicals, have also demonstrated antibacterial and cytotoxic actions.
The essential oil has a chemical composition that varies depending on the origin, although the phenylpropanoid dyllapiol is the most cited component, followed by myristicin, 1,8-cineole and β-ocimene. P. aduncum essential oil was considered a promising insecticide, acaricide, and pesticide in a 2021 scientific review.
In general, from a medical point of view, the plant has demonstrated broad-spectrum antimicrobial actions, which can help explain its long history of use for various infections and infectious diseases. In various studies the leaves and the essential oil extracted from the leaves or fruits have shown antibacterial actions against various gram-positive and gram-negative bacteria. It has also been reported with actions against fungi and yeasts. Also, in France, some researchers reported that it had antiviral actions against the polio virus.
In two studies, the plant has been shown to be an effective treatment for leishmaniasis, a widespread tropical parasitic disease that spreads via the bite of infected sand flies. Both the plant and a chalcone compound extracted in the plant have been reported to kill the parasite or cure the disease.
In the treatment of other parasitic infections, Piper aduncum has been shown to be useful in the treatment of schistosomiasis, where it has a molluscicidal action against the freshwater snail carrying the parasite, as well as against the parasite itself.
It also possesses insecticidal actions against the mosquito that carries and spreads yellow fever.
The leaves are antimicrobial, astringent, carminative, diuretic, slightly tonic, aromatic, stimulant, stomachic and hemostatic for internal use.
Taken as an infusion, the leaves are widely used as a remedy for all types of digestive disorders, including stomach pains, vomiting, dyspepsia, diarrhea, stomach ulcers, intestinal gas and even stomach cancer; they are considered an excellent genitourinary tonic and are used in the treatment of kidney stones, urinary tract infections, cystitis, urethritis, leucorrhoea, vaginitis, and various venereal diseases such as gonorrhea and trichomonas; they are also used for various diseases of the upper respiratory tract such as bronchitis, pulmonary haemorrhages, pleurisy, pneumonia, colds, flu, tonsillitis.
The leaves are also an effective antiseptic healing agent, used to stop bleeding, prevent infections and accelerate healing. They are crushed or pulverized and sprayed directly on the affected area, or an infusion is made from them and used as a detergent.
Sometimes the leaves are heated, pounded, and then used as a poultice instead.
Other uses include agroforestry ones.
The plant is grown locally as a ground cover; while an essential oil is extracted from the leaves which contains asarone and cineole which can be used as insecticide and molluscicide. This also contains safrole, which has been used successfully in the production of powerful insecticides, perfumes, soaps and cleaning products.
Additionally the wood, which is whitish in color, is of medium hardness, brittle and although small, can be used for building base, fuel, posts and fences.

Preparation Method –
The Piper aduncum is a plant that has multiple and traditional uses both in the food and medicinal fields as well as in agroforestry.
The fruits are used as a condiment and to flavor cocoa and are sometimes used as a substitute for long pepper.
The leaves can also be cooked and eaten like herbs.
For medicinal uses, the leaves are crushed or pulverized and sprayed directly on the affected area, or an infusion is made from them and used as a detergent; for other uses they are heated, pounded and then used instead as a poultice.

One thought on “Piper aduncum”