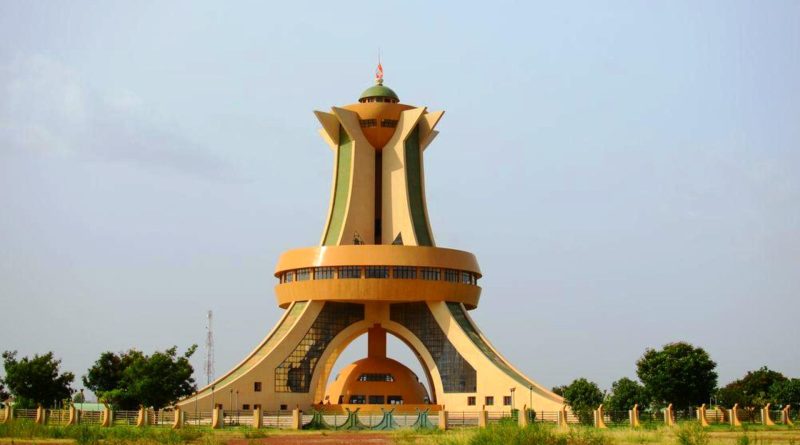 Burkina Faso is a landlocked state, with an institutional form of semi-presidential republic, independent of West Africa.
This state has an area of ​​274200 km² and borders Mali to the north, Niger to the east, Benin to the southeast, Togo and Ghana to the south and the Ivory Coast to the southwest.
Burkina Faso has a population of 20,835,401 (2014) and its capital is Ouagadougou, with 2,200,000 inhabitants (2015).

Geography –
Burkina Faso is a country with an average altitude of 400m so it is a relatively flat region, with few localized exceptions.
Most of the territory of Burkina Faso consists of a penepiano, in some areas moved by a few hills, the last vestiges of a Precambrian massif. The southwest is instead dominated by a sandstone massif; here is the highest peak in the country, Ténakourou (749 m a.s.l.). The edges of the massif are made up of steep escarpments, with gradients of up to 150 m.
Burkina Faso, which was once called Alto Volta, owed this name to four important rivers that cross its territory: the Comoé, the Mouhoun (formerly called Volta Nero), the Nakambé (“White Volta”) and the Nazinon (” Volta Rosso “). The Mouhoun and the Comoé are the only two rivers with the presence of water all year round.
The Niger River basin makes up 72% of the country’s surface. The tributaries (Béli, Gorouol, Goudébo and Dargol) have a seasonal trend; they are dry for about half of the year, but they can also cause significant flooding.
Among the numerous lakes of Burkina Faso, the main ones are Tingrela, Bam and Dem, as well as the large basins of Oursi, Béli, Yomboli and Markoye.

Climate –
Burkina Faso is characterized by a mainly tropical climate, with two distinct seasons: the rainy season, from May-June to September (shorter in the north), with rainfall between 600 and 900 mm; and the dry season, in which the harmattan blows, a dry and hot wind from the Sahara. 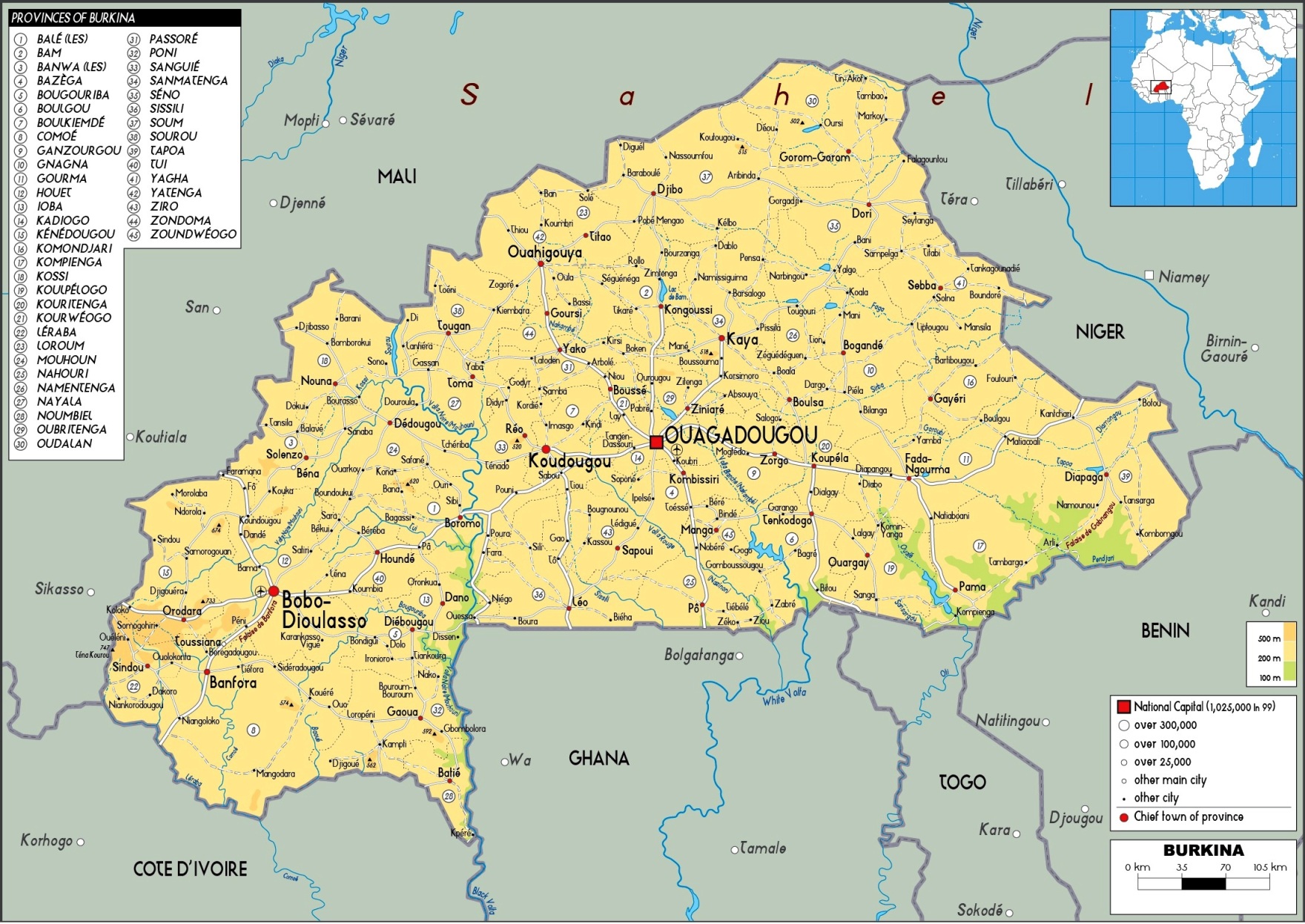 Flora-
Burkina Faso is landlocked and the territory has a great variety of natural environments, from the harsh desert and semi-desert areas of the north to the woods and savannah of the green southwestern region. Near Banfora the rains are particularly intense and there are luxuriant forests, sugar cane crops and rice fields; this is where Burkina Faso’s meager 13% of arable land is located. However, the predominant feature of the land is the vast central laterite plateau of the Sahel, where lush trees and shrubs grow.
Burkina Faso is severely affected by two linked forms of environmental damage: deforestation and soil erosion. According to some sources, as a result of these phenomena, GDP decreases every year by 9%. Today, Ouagadougou is surrounded by a 70km strip of land practically devoid of trees. More than 90% of the country’s energy needs are covered by the consumption of wood, to which must be added the deforestation for commercial purposes, the agricultural practice of “slash and burn” and the extension of the areas used for grazing. Add to this devastation the perennial threat of drought and the locust invasion of 2004, the ecological future of Burkina Faso appears decidedly fragile. Fortunately, it’s not all bad news. Some small projects carried out by non-governmental organizations (NGOs) have proven very effective in solving these problems at the local level. For example, farmers were encouraged to exploit groundwater, rather than rely on unpredictable rains, and to return to traditional farming methods, in particular to restore the construction of diguettes, rows of stones placed along the edges of fields that prevent runoff. water and at the same time favor its penetration into the soil, reducing erosion. A program successfully implemented by the World Health Organization (WHO) eradicated river blindness (onchocerciasis) and allowed the repopulation and resumption of agricultural exploitation of vast fertile areas.
The flora of Burkina Faso is composed of 2,067 plant species. The most important families in terms of species richness and abundance are herbs (Poaceae) and legumes (Fabaceae). Many species are widely distributed in the savannah regions of Africa. There are however two endemic plants, Pandanus brevifrugalis and Isoetes jaegeri.
Approximately 15% of the country has wooded cover.
Very little closed forest can be found and this is mainly gallery forest along waterways. Open forests include savannah of four types, namely Sahelian, Sahelian-Sudanian, Sudanian, and Sudanian-Guinean. Although much of the country is dry and sparse, the vegetation can vary considerably. Northern Burkina Faso mainly consists of savannah, acacia woodland, and during the wet season, thorny shrubs and skimpy tree landscaping. Herbaceous plants include deciduous broadleaf, shrub, desert shrub, semi-desert savannah, and thorny scrub. The crop includes Banana, Cassava, Bougainvillea, Cottone, Guava, Corn, Spinach, Malabar Spinach, Millet, Onions, Papaya, Common Sorghum, Tomatoes and Yams. Most of the country is occupied by sparse savannah grasslands, with occasional shrubs or acacias. Although the country only has about 15% forest cover overall, there are many forests in the south, growing denser along the banks of the perennial rivers. These include Diéfoula Forest, Logoniégué Forest, Laba Forest, Dida Forest, Koulbi National Forest, Bontioli Reserve Forest, Nabere Partial Reserve Forest, Koflandé Forest, Maro Forest, Tui Forest, Deux Balés Forest, Kalio Forest, Tisse Forest, Dibon Forest, Pâ Forest, Mou Forest, Boulon Forest, Tigo Forest, Nakambe Forest and Niangoloko Forest, of which around 16% have official protection.
The trees include the shea tree (known as “Shea” in the local Dioula language and the baobab (hibiscus tree). Although the shea tree is indigenous to the semi-arid Sahel region of West Africa, Burkina Faso contains the The shea tree is extremely important to the Burkinabe people and is defined as “women’s gold” by the villagers, because the shea tree nuts can be harvested and then processed by crushing and grinding for to yield shea butter, important in cooking and in exports, for use in the manufacture of chocolate and cosmetics such as soap.
The most important centers of production of shea butter are in the Province of Sissili and the Province of Ziro. The bark of the tree is also used as an ingredient in traditional medicines and the nutshell is said to be capable of repelling mosquitoes and is also said to protect existing trees. The Bambara peanut (Vigna subterranea) is also grown in abundance; Burkina Faso produced around 20,000 tons in 1989, after peanuts (160,000 tons) and cowpeas (74,000 tons). Between 1982 and 1985, an attempt was made to improve the Bambara peanut, an initiative that involved the participation of plant breeders in the Wheat Legumes Program.
In Burkina Faso we find tree populations of Vitellaria paradoxa, which often have problems with parasites of the Loranthaceae family.
Four species of Tapinanthus (Tapinanthus dodoneifolius, Tapinanthus globiferus, Tapinanthus ophiodes and Tapinanthus pentagonia) are widespread all across Burkina Faso and Mali and are also prone to pest damage. Other trees include Acacia, Flamboyant Tree, Delonix regia, and Neem Tree.