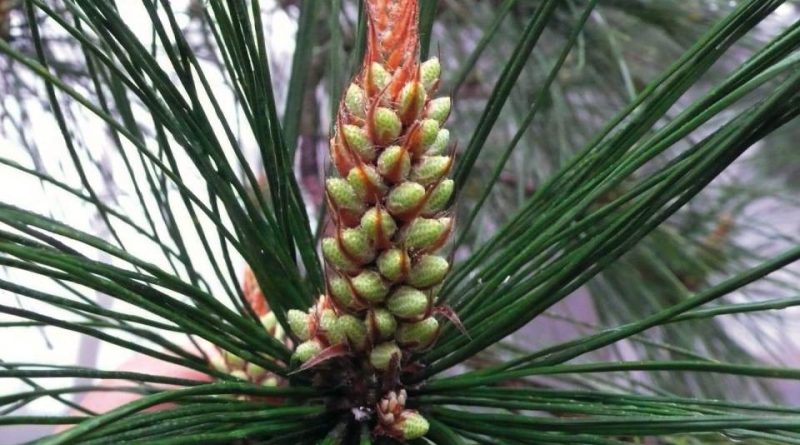 The Chinese red pine (Pinus massoniana Lamb.) Is a conifer belonging to the Pinaceae family.

Etymology –
The term Pinus is the Latin name of the pine, connected with the Sanskrit pítu resinous, mentioned by Pliny, Virgil and others.
The specific Masonic epithet derives from Masson, but of uncertain attribution as it should not correspond to Francis Masson (1741-1805), Scottish botanist and curator of the Kew Gardens; he was the first collector of plants on behalf of Kew Gardens, participated in the second circumnavigation of the cap. Cook and collected plant samples for Joseph Banks in South Africa, the Canary Islands, the Azores, the West Indies, North America and North Africa.

Geographic Distribution and Habitat –
Pinus masoniana is a conifer native to Taiwan and a large area of ​​central and southern China, from Shaanxi to Jiangsu, south of Hainan to Hong Kong and northern Vietnam.
Its natural habitat is that of mixed forests, from humid river valleys to mountain regions, often on acid soils that are poorer than mountain slopes and ridges, which also invade abandoned agricultural fields or grow in secondary vegetation in forest clearings; it grows at low to moderate altitudes, mostly below 1,500 m but rarely up to 2,000 m altitude. 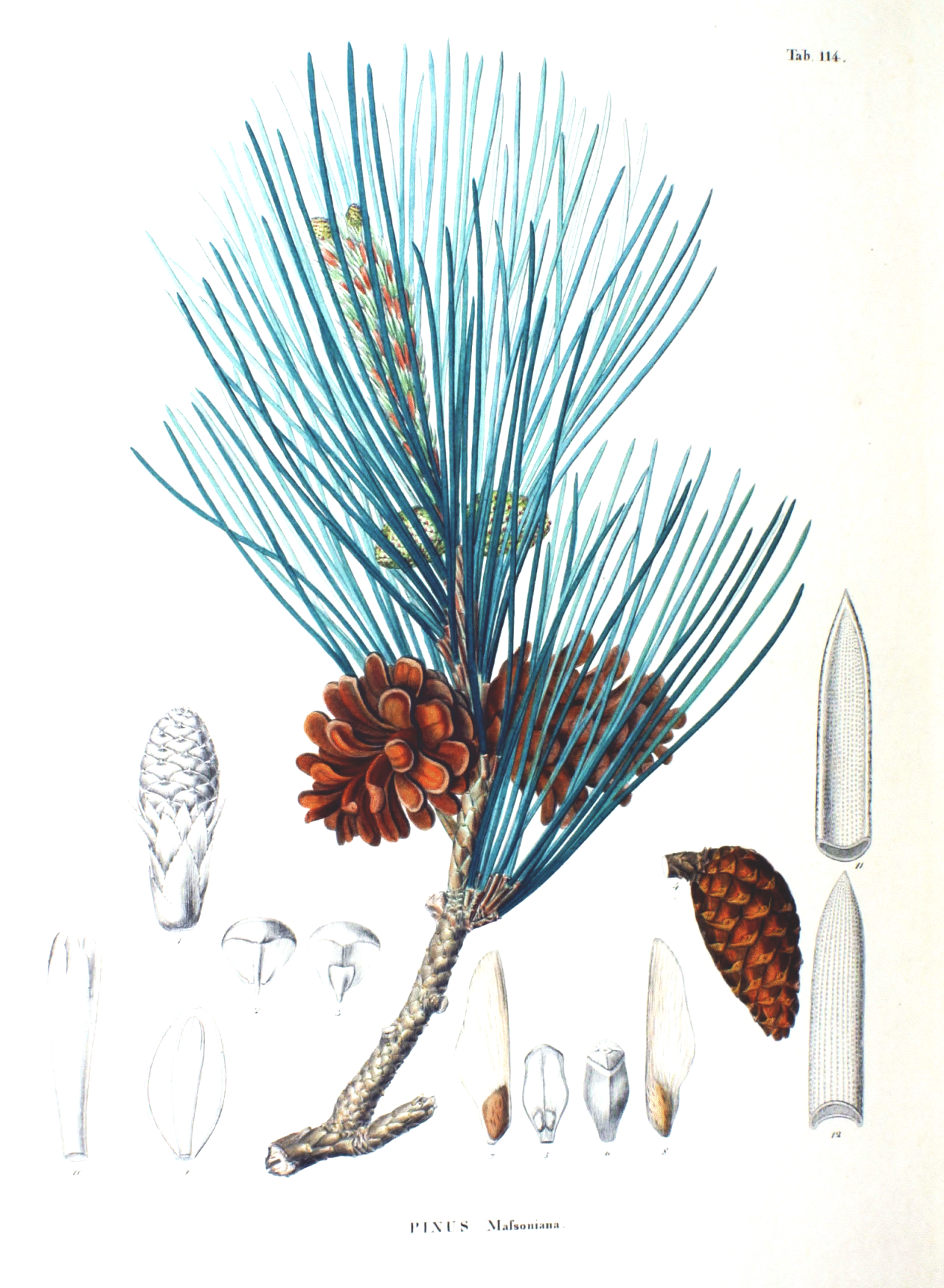 Description –
Pinus massoniana is an evergreen tree that reaches 25-45 meters in height, with a wide and rounded crown formed by long branches.
The bark is thick, grayish-brown and scaly at the base of the trunk, and red-orange, thin and cracked higher up the trunk.
The leaves are dark green needles, with two per bundle, 12-20 centimeters long and 0.8-1 millimeters broad; the persistent fascicle sheath is 1.5-2 centimeters in length.
The cones are ovoid, 4-7 centimeters long, brown-chestnut in color, which open when ripe in late winter up to 4-6 centimeters in width. The seeds are winged, 4-6 millimeters long, with a 10-15 millimeter wing.
Pollination occurs in mid-spring, with cones ripening 18-20 months later.

Cultivation –
The Pinus masoniana is a tree that represents a very important source of wood and resin in China, both for domestic use and for international trade. The plant is also often used in traditional medicine.
In nature, the Pinus masoniana is found in the warm temperate zone of south-central China and at altitudes from sea level close to 2,000 meters, so it grows in a variety of climatic conditions. It is a moderately cold hardy plant, able to tolerate temperatures down to around -15 ° C when fully dormant.
Like all pine species it requires a sunny location to grow well and prefers a light and well-drained sandy or gravelly soil.
In its natural state, this plant does not grow in calcareous soils and does not like poorly drained moor soils and the now rooted plants tolerate drought.
Propagation occurs by seed which is best sown in single pots in a cold cold greenhouse as soon as it is ripe, if this is possible, otherwise at the end of winter. A short stratification of 6 weeks at 4 ° C can improve the germination of stored seeds.
Newly grown seedlings should then be placed in their permanent locations as soon as possible and protected for their first winter or two.
Remember that these plants have a very sparse root system and the sooner they are planted in their permanent locations, the better they will grow.
Trees should be planted in their permanent positions when they are quite small, between 30 and 90cm, although they are actually planted when they are around 5 – 10cm tall. it is advisable to make a mulch after implantation to avoid the growth of herbs.
Trees that are planted larger have difficulty growing for several years. This also negatively affects root development and wind resistance.
Another type of propagation can be that by cuttings. This method only works if the cuttings are taken from very young trees under the age of 10. It is advisable to take single-leaf fascicles with the base of the short shoot. It is also necessary to eliminate the shoots a few weeks before taking the cuttings.
The cuttings, however, are slow to grow.

Customs and Traditions –
Pinus masoniana (Chinese: 馬尾松) is a plant of which cones, fossil seeds from the upper Miocene have been found in Wenshan, Yunnan province, in southwestern China. The fossils most closely resemble the P. massoniana var. hainanensis, which is a mountain tropical thermophilic tree limited to the island of Hainan in southern China.
This species is a very important source of timber, pulp, resin, and various other products in temperate China, where vast plantations exist.
China is the world’s leading producer of gum resin, for both domestic consumption and export, and this species is the main supplier of resin, supplying 95% of China’s oleoresin and employing around 200,000 workers.
This plant covers both edible and medicinal uses.
For edible use, a vanillin flavor is obtained as a by-product from the resins released from the wood pulp.
The seeds of all Pinus species are more or less edible, some are of a good size and give rise to very tasty and nutritious foods, often consumed in quantity. Others may be less desirable, or strongly resinous in flavor, being bitter or, more commonly, a little too small and impractical to make even trying to eat them very useful. However, the seeds of this species, being rather small, have less food interest.
In the medicinal field from the Pinus Masoniana an oil is obtained that is extracted from the needles and this and other parts of the tree are widely used in traditional Chinese medicine.
The chopped or decocted leaves are used in the treatment of rheumatism and intestinal parasites.
Pollen is cardiac and astringent.
Turpentine oil, obtained from the oleoresin of all pines, is antiseptic, antispasmodic, astringent, diuretic, rubefacient, stimulant and vermifuge. It is a valid remedy used internally in the treatment of kidney and bladder disorders and is used both internally and as a massage and steam bath in the treatment of rheumatic diseases. It is also very beneficial for the respiratory system and therefore is useful in treating mucosal diseases and respiratory ailments such as coughs, colds, flu and tuberculosis. Applied externally in the form of ointment patches, poultices, herbal steam baths and inhalers, it is a very beneficial treatment for a variety of skin ailments, wounds, sores, burns, boils, etc.
The wood of the stems is carminative and demulcent.
The stem bark is astringent, pesticide and vulnerary.
The root bark is astringent and tonic.
This plant also has agroforestry uses, in fact it is an important plant for reforestation in southern China. It readily invades open spaces and therefore can be used as a pioneer species to establish new woodlands.
The needles contain a substance called terpene, which is released when rain wets the needles and has a negative effect on the germination of some plants, including wheat.
From the needles, a light brown or green dye is obtained.
The tree is an excellent source of resin. The pine resin obtained from this species forms the basis for a variety of chemicals, the so-called ship depot industry.
The resins are obtained by tapping the trunk, or by destructive distillation of the wood.
In general, trees in the hottest distribution areas give the highest yields.
Turpentine oil consists on average of 20% oleoresin and is separated by distillation.
Recall that turpentine has a wide range of uses, including as a solvent for waxes, etc., to dilute and dissolve paints and varnishes, shoe polish, medicines, etc.
Furthermore, rosin is also obtained by distillation of the pine resin. This is used in the production of soap and paper glue, as a component of paints and varnishes, and to coat the bows of stringed musical instruments such as violins.
From the resin it is possible to obtain pitch which is used for waterproofing, as a wood preservative, etc.
The heartwood of the Pinus Masoniana is yellow-brown in color and distinct from the sapwood. The wood is straight grained, light, water resistant but easily attacked by termites and ground insects. It is however of good quality and is used for construction, underwater construction, mining poles, boxes, furniture, barrels, tool handles, wood carving, musical instruments, etc.
Natural woodlands, especially old-growth ones, provide most of the sawn timber, while fast-growing plantations are mostly converted to pulp.
Among the warnings we remind you that wood, sawdust and resins of various pine species can cause dermatitis in sensitive people.
Furthermore, from an ecological point of view, despite the fact that one of its two varieties has been assessed as critically endangered, the species as a whole remains common and widespread. The plant is classified as “Least Concern” on the IUCN Red List of Threatened Species (2013).

Preparation Method –
The Chinese red pine, as a bed, has many uses so that, in fact, practically the entire plant is used.
A vanillin aroma is obtained from the plant, as a by-product of the resins released from the wood pulp, which is used for some food uses.
The seeds can be eaten both raw and cooked in various ways.
In the medicinal field an oil is obtained which is extracted from the needles and this and other parts of the tree.
The chopped or decocted leaves are used for rheumatism and intestinal parasites.
Turpentine oil, obtained from the oleoresin of all pines, is widely used especially in traditional Chinese medicine.
The wood of the stems, the bark of the stem and the bark of the root are also used for medicinal purposes.