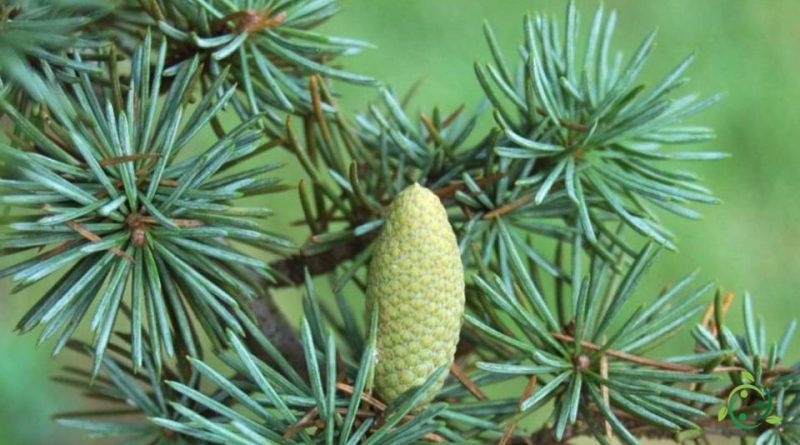 The Atlas Deodar (Cedrus atlantica (Endl.) Manetti ex Carrière, 1855) is a conifer of the Pinaceae family native to Morocco and Algeria.
This plant is very common in the Atlas Mountains, where it is found in the cooler slopes to the north from 1,500 to 2,200 meters.
It was introduced in Europe in the mid-19th century where it is often found in parks, especially in the glaucous variety, very ornamental.

Suitable breeding habitat –
The Atlas Deodar is a plant native to North Africa, in an area between Morocco and Algeria and its natural habitat is that of the upper slopes of the Atlas mountains where there is little or no rain in the growing season, but with the soil fed by the melting of the snow of the overhanging peaks.
This conifer forms forests on mountain slopes at 1,370-2,200 m, often in pure forests, or mixed with: Abies numidica, Juniperus oxycedrus, holm oak – Quercus ilex and Acer opalus.

Propagation –
For the propagation of Cedrus atlantica it should be taken into account that this plant, when it manages to establish itself, thrives on most soils, being very tolerant to gypsum, arid sites and drought.
Prefers rich loam or sandy clay with full sun exposure; moreover, this species is more tolerant to atmospheric pollution than other members of the same genus.
The plant manages to grow in hot and dry areas with less than 40 cm of rain per year, but also in areas with cool summers and up to 200 cm of rain.
In addition, smaller trees, less than 50 cm in height, establish themselves much faster and better than taller trees; those taller than 2 meters are difficult to take root.
The propagation of Cedrus atlantica occurs by seed: the technique involves collecting the cones in winter, keeping them in a warm room until they open. At this point they must be sown immediately in the cold. According to some authors, a short cold stratification of one month improves the germination rate.
Once sowed, the pot (or the pallet) must be kept moist but care must be taken because the young seedlings must not get too wet so they must be kept in a ventilated environment.
When the seedlings have reached the size to be handled, they should be placed in individual pots. In these containers they should be grown in a cold greenhouse for their first winter and then transplanted to their permanent positions in late spring or early summer.
These seedlings are recommended to be protected from the cold for 1-2 winters.
Propagation can also be obtained by cuttings of terminal shoots which can be planted in a greenhouse in late autumn; however, taking root is not easy.

Ecology –
Morocco currently has the highest total area of ​​Atlas Deodar in the world, and forms vast forests in the country’s wetlands, around the Middle Atlas range, the eastern and northern High Atlas, and in the western and central areas. del Rif. The current total area is approximately 163,000 hectares, of which approximately 115,000 hectares (80%) are located in the mountains of the Middle Atlas. The species is endangered due to human use, wood harvesting and fires. Data dating back to 1927 shows more Atlas Deodars (more than 150,000 hectares) in the Middle Atlas mountains alone. The Rif Mountains had one of the largest cedar forests in the past, but today the forests are much smaller, 15% of the total cedar forests in Morocco. Massive reforestation campaigns have recently taken place in the region of the Ifrane province.
In Algeria, the Atlas Deodar is in significant decline. According to 1966 data, the species occupied 23,000 hectares, forming forests around the Djurdjura mountains in Kabylia and the Aures mountains. However, less than 15,000 hectares are currently expected to inhabit due to extensive fires and human use.
A study of this species also found that Atlas Deodars occupied a wider range at lower altitudes during the Middle Holocene than today. The geographic expansion of the Middle Holocene was manifested by low winter temperatures and greater availability of water throughout the Rif mountain range than in modern conditions. A trend of increasing aridity observed after 6,000 years has progressively reduced the range of the Atlas cedar and pushed its migration towards altitudes above 1,400 m a.s.l.
What is more worrying is that between 1960 and 2010 the range of the Atlas Deodar decreased by about 75% and that the eastern populations of the range in the Rif Mountains were even more threatened by the overall lack of availability of water compared to western ones. Today, the Atlas Deodar populations in the Rif Mountains persist in small and isolated areas (Jbel Kelti, Talassemtane, Jbel Tiziren, Oursane, Tidighine) which we consider modern micro-shelters. The conservation of these isolated populations is essential for the future survival of the species, preserving the polymorphisms and the recovery potential of the population in different climatic conditions.
Among other things, the existence in life of other species is linked to these forests and their habitat, including a monkey (Macaca sylvanus Linnaeus, 1758), a primate that had a much wider prehistoric distribution in northern Morocco and Algeria.