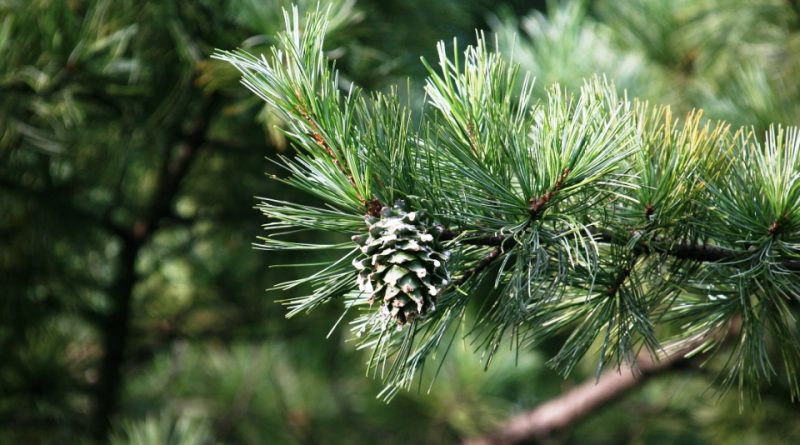 Etymology –
The term Pinus is the Latin name of the pine, connected with the Sanskrit pítu resinous, mentioned by Pliny, Virgil and others.
The specific koraiensis epithet refers to Korea and that area corresponding to the peninsula located in the Far East.

Geographic Distribution and Habitat –
Korean Nut Pine is a conifer native to the Far East, in an area that includes north-east Asia: Korea, Manchuria, Mongolia, Japan and some areas of south-eastern Russia (Coastal Territory).
Its natural habitat is that of mixed coniferous and mixed coniferous-deciduous forests on dry mountain slopes, especially those facing north. In the northern part of its range it is present at moderate altitudes, ranging from 600 to 900 m, while in the southern part, where the climate is milder, it grows in the high mountains, from 2000 to 2600 m. 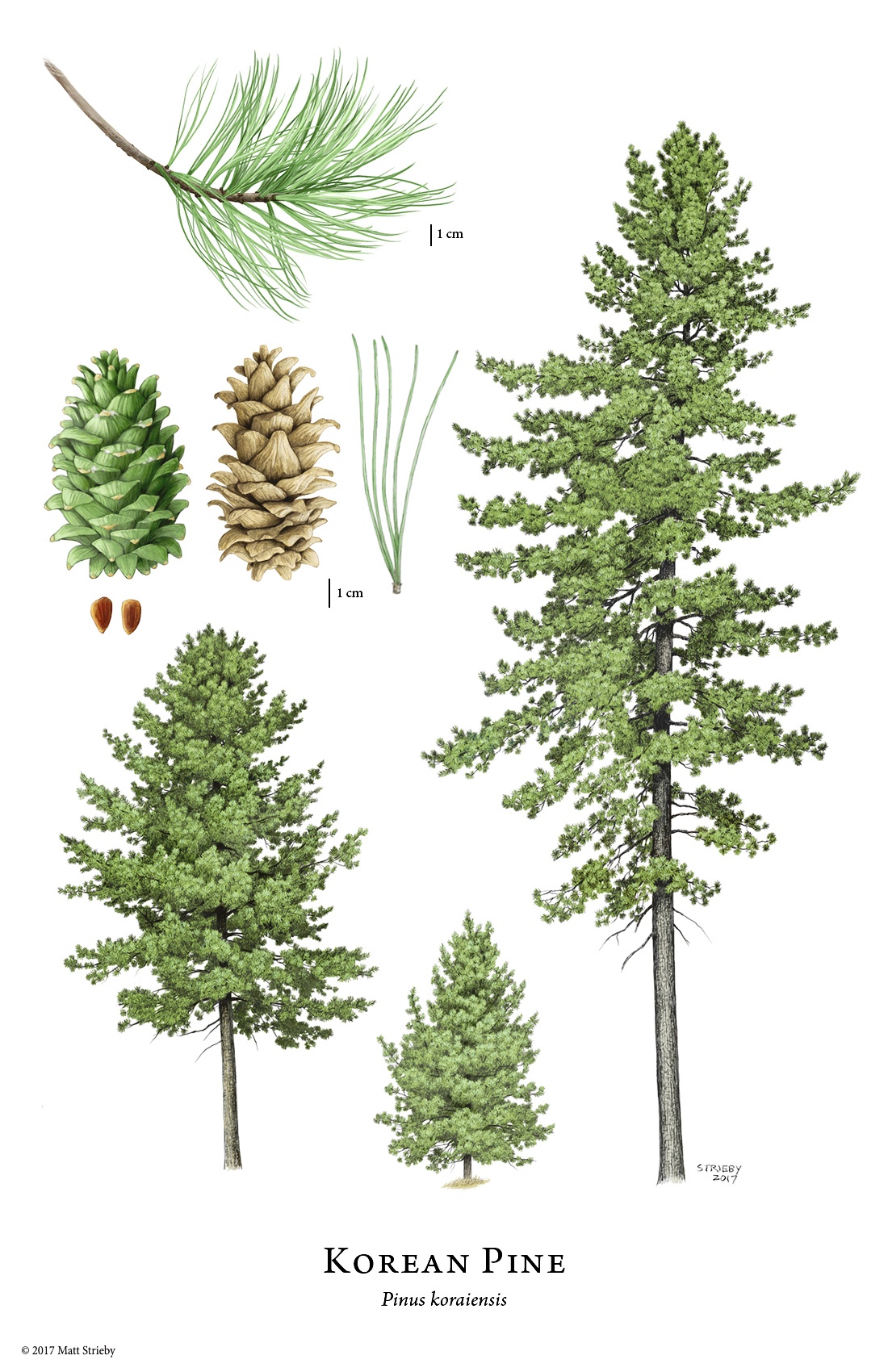 Description –
Pinus koraiensis is an evergreen plant with an arboreal habit that can reach 35 meters in height and with a broad cone shape of the crown.
The bark is dark gray and rather thin which also tends to flake.
The leaves are slender needles, about 12 cm long, bright green on the upper page and white-blue on the lower one. The needles are grouped in large groups of five.
The male flowers are red but when opened they turn yellow; the female flowers are red and are found in separate clusters on young branches in early summer.
The fruits are conical-shaped pine cones, about 8 to 17 cm long, of initially purple hue, which then turns brown about 18 months after pollination.
The seeds are pine nuts about 15-18 mm long with a vestigial wing which are then dispersed.

Cultivation –
Pinus koraiensis is an evergreen tree that is extensively harvested in nature for local use as a food, medicine, and source of materials – green cones are sold for wine making in local markets.
It is a very cold hardy plant, able to tolerate temperatures down to at least -35 ° C when completely dormant.
It grows in areas with a summer monsoon climate near the coast, but with a strong continental influence in the hinterland. Temperature extremes can range from plus 37 ° C to minus 45 ° C within its natural range.
This pine species, in general, requires a sunny exposure to grow well and a light, well-drained sandy or gravelly soil. It does not like poorly drained moor soils.
Stabilized plants tolerate drought well but this species prefers a cool, humid climate.
The plant is sometimes grown for its edible seeds, and there are some varieties with different characteristics.
We remember the “Glauca” and the “Silveray” with blue shades and the “Winton” with wide hair.
Or, due to its ability to withstand freezing temperatures, it is used as an ornamental tree in public places such as parks and gardens in countries such as Canada and the northern United States.
Propagation occurs by seed which is recommended to be sown in individual pots, in a cold greenhouse, as soon as it is ripe, if this is possible, otherwise at the end of winter. A short stratification of 6 weeks at 4 ° C can improve the germination of stored seeds.
The seedlings are then planted in their permanent positions as soon as possible and need to be protected for 1-2 winters.
Plants have a very sparse root system and the sooner they are planted in their permanent locations, the better they will grow. Trees should be planted when they are quite small, between 30 and 90 cm in height, although they are actually planted when they are about 5 – 10 cm tall. However as long as they are given excellent mulch that prevents weed growth, they will establish themselves very well. Larger trees, on the other hand, will have stunted growth and are unlikely to develop for several years. This also negatively affects root development and wind resistance.
Another propagation system can be that by cuttings. This method only works if these are taken from very young trees, less than 10 years old. We recommend using single-leaf twigs with a short shoot at the base. It is then advisable to remove the shoots a few weeks before taking the cuttings. Cuttings usually grow slowly.

Customs and Traditions –
Pinus koraiensis is a very important timber tree, harvested in large quantities for the commercial use of its good quality wood; the rather large seed is also harvested commercially and constitutes the main source of pine nuts imported to Europe and America.
The plant is also commonly grown as an ornamental, especially in China.
Remember that, as with other pines, wood, sawdust and resin can cause dermatitis in sensitive people.
Pinus koraiensis is used for both food and medicinal uses.
For food use raw or cooked seeds are used which are rich in oil.
The seed has a soft consistency, with a vaguely resin flavor, and is used as a snack or even as a staple food.
The seed can also be dried and ground into a powder, then used as a flavoring and thickener in soups, etc.
The seeds, as mentioned, are rich in a vegetable oil with a high nutritional value, used in the food industry.
A vanillin aroma is obtained from the wood pulp as a by-product of the resins.
In Korea, pollen is used to flavor biscuits.
Immature female cones are used in wine making.
For medicinal use, the seed is used which contains various active compounds and is analgesic, antibacterial and anti-inflammatory.
It is used in Korea to treat earache, nosebleed and to promote milk flow in nursing mothers.
Turpentine oil, obtained from the oleoresin of all pines, is antiseptic, antispasmodic, astringent, diuretic, rubefacient, stimulant and vermifuge.
It is a valid remedy used internally in the treatment of kidney and bladder disorders and is used both internally and as a massage and steam bath in the treatment of rheumatic diseases.
It is also very beneficial for the respiratory system and therefore is useful in treating mucosal diseases and respiratory ailments such as coughs, colds, flu and tuberculosis.
Applied externally, in the form of ointment patches, poultices, herbal steam baths and inhalers, it is a very beneficial treatment for a variety of skin ailments, wounds, sores, burns, boils, etc.
The bark is used in the treatment of burns and skin ailments.
This plant is also used for various uses: from agroforestry to the cosmetic industry.
The needles contain a substance called terpene, which is released when rain wets them and has a negative effect on the germination of some plants, including wheat.
From the needles, a light brown or green dye is obtained.
The seeds are a source of oil used to make soap and lube.
Extracts from various parts of the plant, including cones, seed shells, and seed oil are used as ingredients in commercial cosmetic preparations such as antioxidants, emollients, humectants, perfumes and skin conditioners.
The tannin is obtained from the bark while the oleoresins are obtained by tapping the trunk, or by destructive distillation of the wood.
Turpentine oil consists on average of 20% oleoresin and is separated by distillation.
Turpentine has a wide range of uses, including as a solvent for waxes, etc., for diluting and dissolving paints and varnishes, shoe polish, medicine, etc.
By distillation of the pine resin, rosin is also obtained which is used in the production of glue for paper and soap, as a component of paints and paints, and to coat the strings of stringed musical instruments such as violins.
From the resin a pitch can be obtained which is used as a waterproofing agent for wood, etc.
The wood is light, soft, straight-grained and quite resistant to decay. Of good quality and easy to process in milling and carpentry, it is used for applications such as telephone poles, railway sleepers, wooden bridges and shipbuilding. In construction provides construction lumber, as well as flooring, plywood and veneers. It can be chipped for the production of various chipboards or pulped for the paper industry. More specialized uses are furniture, sports equipment and musical instruments.
From an ecological point of view, however, the commercial value of wood has led to the over-exploitation of the wild populations of the tree and the destruction of the forest ecosystems in which it grows. It is remembered that the Siberian tiger lives in these pine forests and the conservation of this species of tree is essential to preserve this feline.
Other species related to this plant in the natural state are the Nutcracker (Nucifraga caryocatactes, Linnaeus, 1758), which collects the seeds and plays an important role in their dispersion.
These birds are important in seed dispersal, and therefore in maintaining Pinus koraiensis populations.
This species, in fact, even if it still has a wide distribution, due to the exploitation of natural populations for its wood and edible seeds, has caused the degradation of the forests and a decrease in its area of ​​occupation of up to 50%. in some parts of its range. Despite continued exploitation, the wide distribution of this species and the large overall population size, this species is not yet threatened but this situation could change within the next decade if current trends continue. The plant is currently classified as “Least Concern” on the IUCN Red List of Threatened Species.

Preparation Method –
Various parts of Pinus koraiensis are used both in food and medicine or for other uses.
The seeds of this conifer, from which an oil rich in fatty acids is obtained, are the most commercially exploited pine nuts, especially in northeastern China. They are also the basic ingredient of jatjuk, a pine nut porridge typical of Korean cuisine.
In Korea, pollen is used to flavor biscuits.
Immature female cones are used in wine making.
The seed, which contains various active compounds, finds medicinal use and is analgesic, antibacterial and anti-inflammatory.
Other uses concern the cosmetics, timber, and other industrial sectors.