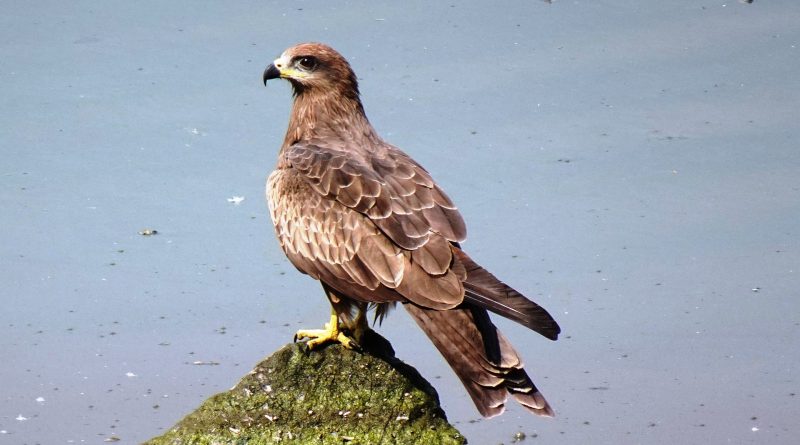 The black kite (Milvus migrans Boddaert, 1783) is a bird of prey belonging to the Accipitridae family.

Systematics –
From a systematic point of view it belongs to:
Eukaryota Domain,
Kingdom Animalia,
Sub-kingdom Eumetazoa,
Superphylum Deuterostomia,
Phylum Chordata,
Subphylum Vertebrata,
Superclass Tetrapoda,
Aves class,
Subclass Neornithes,
Order Accipitriformes,
Accipitridae family,
Subfamily Buteoninae,
Genus Milvus,
M. migrans species.
The terms are synonymous:
– Falco migrans Boddaert, 1783;
– Milvus ater;
– Milvus lineatus, Gray, JE, 1831;
– Milvus melanotis;
– Milvus migrans affinis, Gould, 1838.
Within this species, some subspecies are recognized:
– M. m. migrans, Boddaert, 1783: European brown kite – Present in central, southern and eastern Europe, as well as in the Maghreb of northwestern Africa, in Tien Shan and from south to north-west of Pakistan. It winters in sub-Saharan Africa. It is distinguished by its whitish head.
– M. m. lineatus, J. E. Gray, 1831: Black kite – Present in Siberia, in the air of the Himalayas, North India, North Indochina, South China and Japan. Birds of the northern hinterland migrate in winter to the east coast of the Persian Gulf and South Asia. Morphologically it is distinguished by the presence of a larger light carpal spot.
– M. m. govinda, Sykes, 1832: Small Indian kite – Present in eastern Pakistan in the east, through tropical India and Sri Lanka, up to Indochina and the Malay peninsula. Resident subspecies that can be seen soaring and soaring in urban areas; it is easily distinguished by the presence of the shallow forked tail.
– M.m. affinis, Gould, 1838: Swallowtail Kite – Present on the island of Sulawesi and perhaps Lesser Sunda Islands; also present in Papua New Guinea except in the mountains and in NE and E Australia.
– M m. formosanus, Kuroda, 1920: Taiwanese Kite – Present in Taiwan and Hainan and resident.

Geographic Distribution and Habitat –
The black kite is a bird which, also due to the presence of subspecies, is present in a vast range that includes: Europe, Asia, Africa and Australia. Populations in temperate zones tend to be migratory while tropical populations are resident. European and Central Asian birds are migratory, they move in winter to the tropics, those of warmer regions are resident.
In Europe, the black kite, from March to October, can be found in almost the whole continent.
Over the entire Alpine arc it is present up to about 1200 meters.
Its preferred habitat is that of open landscapes with trees near bodies of water. 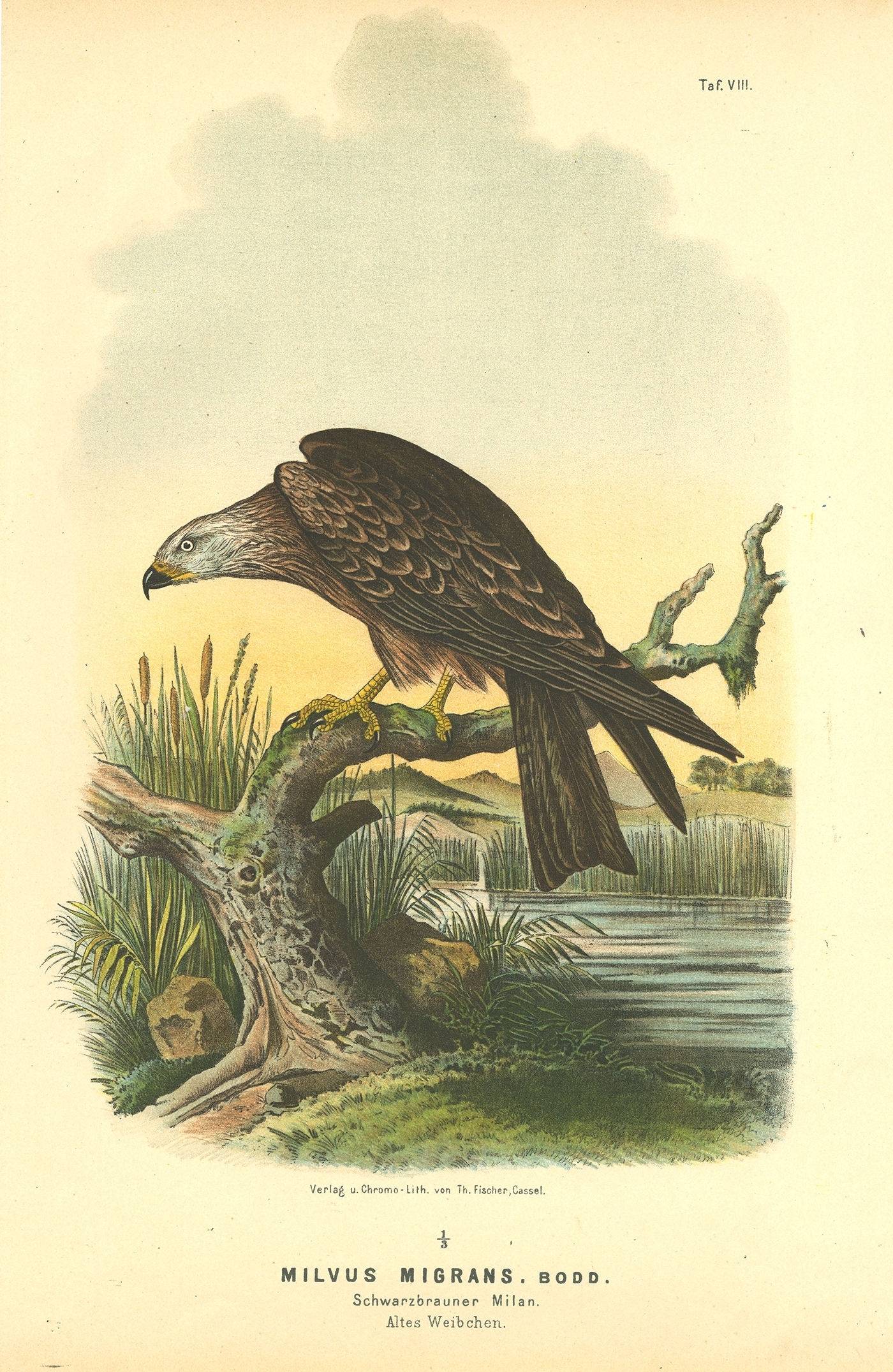 Description –
The Milvus migrans is a raptor with a total length of 55-60 cm, a wingspan of 150-170 cm, for a weight ranging between 600 and 930 grams, with a sexual dimorphism not evident but with females normally larger of the male.
It has a slender body, with brown plumage, paler below, tending to reddish-brown; in juveniles it is similar to adults, but paler, and opaque with many dark longitudinal streaks.
It has a short, hooked beak, black above, yellow-blackish below, with yellow wax.
The head is brown in color, lighter than the body with dark streaks.
The eyes have a reddish-brown iris in adults or gray-brown in young people.
The wings are long, arched and in flight slightly bent downwards.
It has a long, rounded, nicked and dark barred tail that is used as a rudder.
The legs are relatively short, yellowish, with greyish-black nails.
The eggs are very large and white with orange pigments.
The voice, rather melodious, is composed of a series of “quin-chichichi” trills.
The flight is slow, deeply beaten and glided, even circularly, often exploiting the thermal updrafts.
The black kite, in the wild, can reach the age of 20.

Biology –
Milvus migrans has a breeding period from April to June.
The nest is built on old trees in a high environment with dry branches and has a diameter of 50 – 100 cm; it is padded with grass, foliage, fur and fur.
The female normally lays two to three eggs. The eggs are hatched mainly by the females for 30 – 35 days.
Young birds fly after 40 – 45 days.
The male takes care of teaching the small birds of prey to fly. The offspring are nidicolous and fly away at 6-7 weeks. Once they reach sexual maturity they go to look for a female to start a new family.

Ecological Role –
Milvus migrans is a raptor with mainly diurnal habits; it can live alone, in pairs or in small groups.
Its diet is based on dead fish, small birds, small mammals, amphibians, reptiles, insects, carrion and waste.
This species according to the IUCN is currently of minimal concern, however it is threatened by illegal killings, decreased trophic resources. Many colonies depend directly on the trophic resources present in open landfills, the progressive closure of which could have a negative impact on the breeding population in Italy.
However, it is by far the most widespread bird of prey in the world.
Among the conservation measures it should be remembered that it is listed in Annex I of the Birds Directive (79/409 / EEC). Species subject to protection according to Article 2 of Law 157/92.