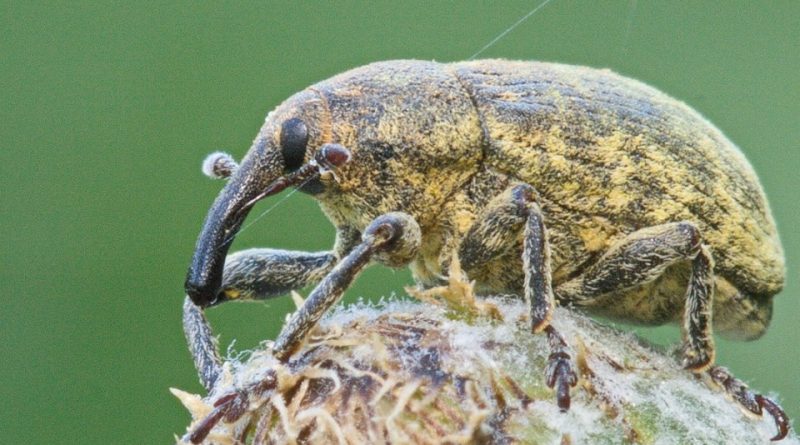 The Artichoke Weevil (Larinus cynarae, J.C. Fabricius, 1787) is an insect belonging to the Curculionidae family.

Geographic Distribution and Habitat –
Larinus cynarae is a univoltine weevil, with sexual reproduction, which nourishes, mates and develops almost exclusively on thistles of the genera Onopordum and Cynara (Asteraceae: Cardueae) in the circummediterranean area.

Morphology –
Larinus cynarae is a Beetle whose adults are 12-16 mm long.
The livery is blackish in color and slightly covered with a light grayish-pale yellow tomentosity.
The body is tapered and the head ends with the characteristic arched and elongated rostrum of the Curculionids.

Attitude and Life Cycle –
The Artichoke Weevil overwinters at the adult stage and, when it arrives in the period of May, it moves to the fields cultivated with Artichoke.
Here they feed and mate on their host until early summer. During the same period, the females lay their eggs between the bracts of the thistle flower heads. A single egg is laid in each hole made by a female with its snout. These live for approximately 3-6 weeks, during which time they can lay up to 50 eggs.
After hatching, the larvae grow inside the flower heads and feed on the developing seeds. Pupation occurs in the flower head in a more or less loose cocoon constructed from the chewed tissue of the flower head. Development from egg to adult takes about 6 weeks. After development is complete, the adults emerge from the dry flower head, often disperse away from the plants, overwinter by diapause, and reappear the following spring.
The adults do not feed from the moment of the eclipse until the diapause rupture in spring and do not survive after the reproductive period.
This awl therefore completes one generation per year.
The activity of this insect is therefore borne by the leaves, stems and bracts. In summer, the adults that lay eggs between the bracts and the newborn larvae feed at the expense of the flower heads (July-August); the new adults that overwinter damage the crops the following year (in fact, in autumn, as mentioned, they generally do not feed).

Ecological Role –
The populations of Larinus cynarae, under certain conditions, can reach high numbers which can be remedied with careful rotation techniques and crop association.
In cases of high infestations, intervention was generally carried out by carrying out interventions against the adult stages before these ovipongers lay at the level of the flower heads. The treatments often have to be repeated a few times with a frequency congruent to the pesticides used, suspending them however when the plants begin to bloom so as not to damage the pollinators and other useful organisms.