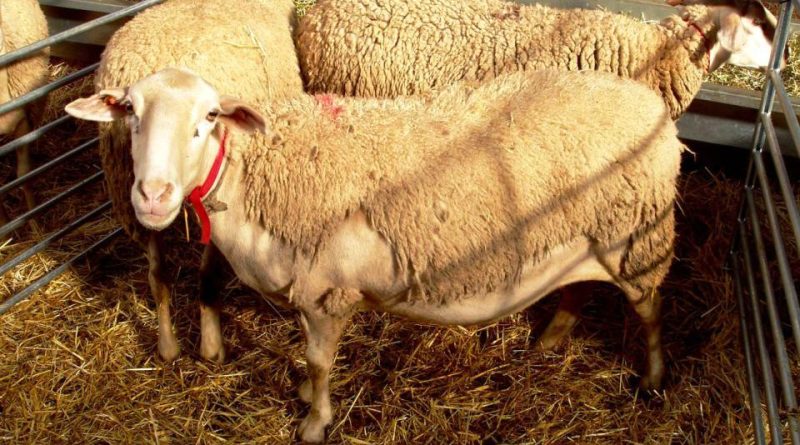 The Rasa Aragonesa is a Spanish sheep (Ovis aries Linnaeus, 1758), originally from the autonomous region of the same name, with a main aptitude for meat production.

Geographic and Area Distribution –
The Rasa Aragonesa is an indigenous Spanish sheep breed. Its distribution range is concentrated in the Ebro Valley, mainly in the autonomous community of Aragon and in regions of other communities, such as Castilla y León, Castilla-La Mancha, Navarra, La Rioja or Catalonia.
The Rasa Aragonesa breed is the second most important breed in Spain after the Merinos.

Origins and History –
The Rasa Aragonesa sheep breed originates from the autonomous region of the same name. This breed derives from the evolution of the primitive sheep breed Ovis Aries Ligeriensis, which was introduced from central Europe on the peninsula and settled in the Ebro valley, thus adapting to the conditions of the region.
The term Rasa refers to the short length of its fleece, while Aragonesa obviously refers to the area in which it is mostly found, that is, in the Autonomous Community of Aragon.
The breeding of this breed and the keeping of its registers is regulated by the Spanish government with a resolution of 28 January 2020, of the General Directorate of Agricultural Productions and Markets.

Productive attitude –
Rasa Aragonesa is a sheep with a main productive aptitude for meat.
The typical production is lamb (Ternasco de Aragón PGI), slaughtered between 70 and 100 days, with a live weight between 20-24 kg, with a perfectly finished carcass from the point of view of adipose tissue and with a quality of meat fully recognized for its tenderness and flavor.
This breed plays an important role in the popular culture and economy of the areas where it is raised, with an important influence for the shepherds who own it. Among other things, the breeding of this breed has given rise, over time, to numerous sayings, stories, poems, popular songs, folklore, beliefs, sacred art and gastronomic traditions.
Breeding of the breed is semi-extensive and this sheep has rustic characteristics, suitable for grazing in areas with very low rainfall and extreme temperatures. It also shows good adaptability to marginal environments, with good behavior in the high mountains to semi-desert environments.
Tolerance or specific resistance: General resistance characteristic of rustic breeds.
The Rasa Aragonesa makes good use of the food resources offered by the pastures consisting of both spontaneous vegetation, forage and crop residues, and relaying during the birth periods. During these times the sheep feed mainly on concentrates of cereals and fodder. They are not generally transhumant as they carry out this practice in exceptional cases.
As regards the parameters related to the reproductivity and sexual maturity of the breed, the following is reported:
– Female maturity age (months): 12;
– Male maturity age (months): 12;
– Average age of the males (months): 60;
– Female mean reproductive age (months): 72;
– Average age at first birth (months): 18;
– Interval between calving (days): 312;
– Average number of births per year: 1.17;
– Productive lifespan (years): 6.