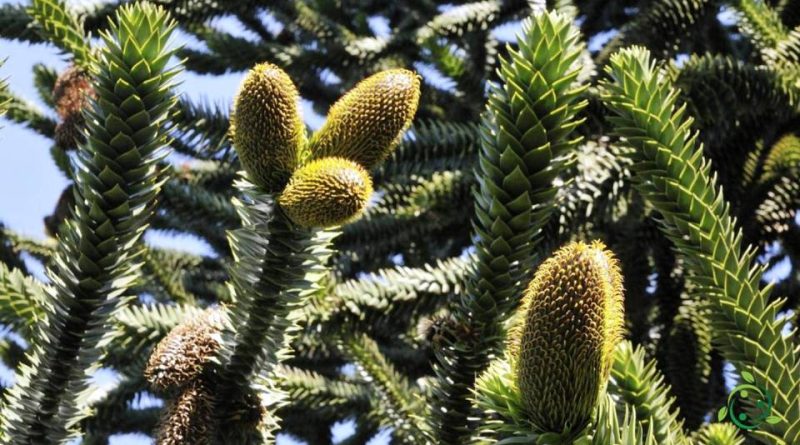 The Monkey Puzzle Tree (Araucaria araucana (Molina) K. Koch, 1873) is a conifer native to central Chile and central-western Argentina where it forms extensive and very open forests on the reliefs overlooking the Pacific (between 900 and 1800 meters quote).
This plant was introduced in Europe as an ornamental species at the end of the eighteenth century.
In Europe it can grow up to Norway (Ålesund) and is however a rather rustic species.

Suitable breeding habitat –
The Monkey Puzzle Tree, in the areas of origin, grows on the slopes of the Chilean and Argentine Andes, in particular above 1000 m, in regions characterized by heavy winter snowfalls. The weight of the snow often breaks the older branches so the tree keeps only a small crown of new branches above a column-like trunk: a rather different bearing from the conical shape it assumes in temperate gardens.
It grows mainly on soils of volcanic origin, often arid and stony; in pure populations or small groups mixed with other species; at altitudes from 900 to 1,800 meters.

Propagation –
The Araucaria araucana, even if it is a rustic plant, in order to grow it prefers a deep and well-drained soil while it does not tolerate dry and hot soils and atmospheric pollution.
On the other hand, it is very tolerant to marine exposure and brackish winds.
Propagation occurs by seed, which is recommended to be sown as soon as it is ripe in an unheated seedbed. Alternatively, it can be kept cool and moist and then sown in a greenhouse at the end of winter.
Although the plants are quite cold tolerant, the root systems of the seedlings can be damaged in periods of very cold weather, so extra protection should be given if necessary. The seed usually germinates in 1 – 2 months at 15 ° C.
After germination it is necessary to wait for the young plants to become manageable in order to be able to put them in individual pots.
Plants have a rather sparse root system so it is best to place them in their final positions as soon as possible.
It is also advisable to provide young seedlings with shelter for their first winter.
For propagation it is also possible to start from semi-woody cuttings, in the period from May to July in an unheated seedbed.
Only epicormal lateral shoots should be used; the normal lateral shoots, in fact, do not develop correctly. Recall that an epicorm shoot is one that develops from a dormant bud on the main trunk of the tree.

Ecology –
It has been seen that most of the seedlings grow directly under female adult trees. However, only seedlings that grow under the canopy or in exposed areas have a good chance of developing.
Also due to its thick fire-protecting bark, adult Araucaria araucana is better adapted to allogeneic disturbances caused by volcanic activity and fire than competing species. Araucaria can gain advantages if it survives the disturbance and / or colonizes devastated areas.
Although the Araucaria araucana is a rather widespread plant, it is instead suffering in its original habitat, in the natural populations.
The IUCN reports that this species is at high risk of extinction in the wild due to a limited and severely fragmented distribution, coupled with the continuing decline in habitat size and quality.