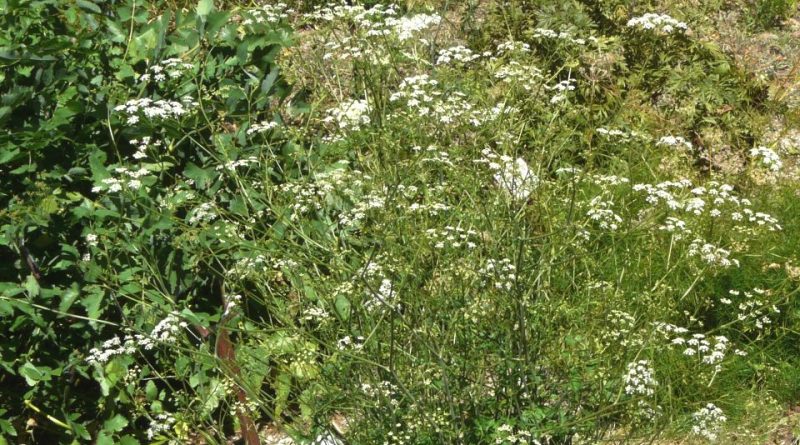 The Burnet Saxifrage (Pimpinella saxifraga L.) is a herbaceous species belonging to the Apiaceae family.

Etymology –
The term Pimpinella could derive from the corruption of the Latin word bipennella / bipennula bipennata to indicate the arrangement of its leaves in pairs. For other authors it derives from the diminutive of pampinus pampino, due to the similarity? of the leaves to those of the vine, or finally by correspondence with the Italian name of the Sanguisorba, again due to the similarity of the leaves.
The specific saxifraga epithet comes from sáxum sasso and from frángo breaking, splitting: plants that break stones, as they often grow on rocks, where they manage to insinuate their roots even in small cracks and break stones as they grow.

Geographic Distribution and Habitat –
The Burnet Saxifrage is a plant with a Eurasian-South European distribution. It is present in Europe, including Great Britain, up to western Asia and western Siberia.
In Italy it is present in all regions except in Puglia, Calabria and Sicily.
Its habitat is that of semi-natural grassland vegetation, on the edges of woods and hedges, on both calcareous and marly-arenaceous soils, from basic to subacid, poor in humus and nitrogen compounds, from sea level to about 1500 m (rarely up to 2000 m). 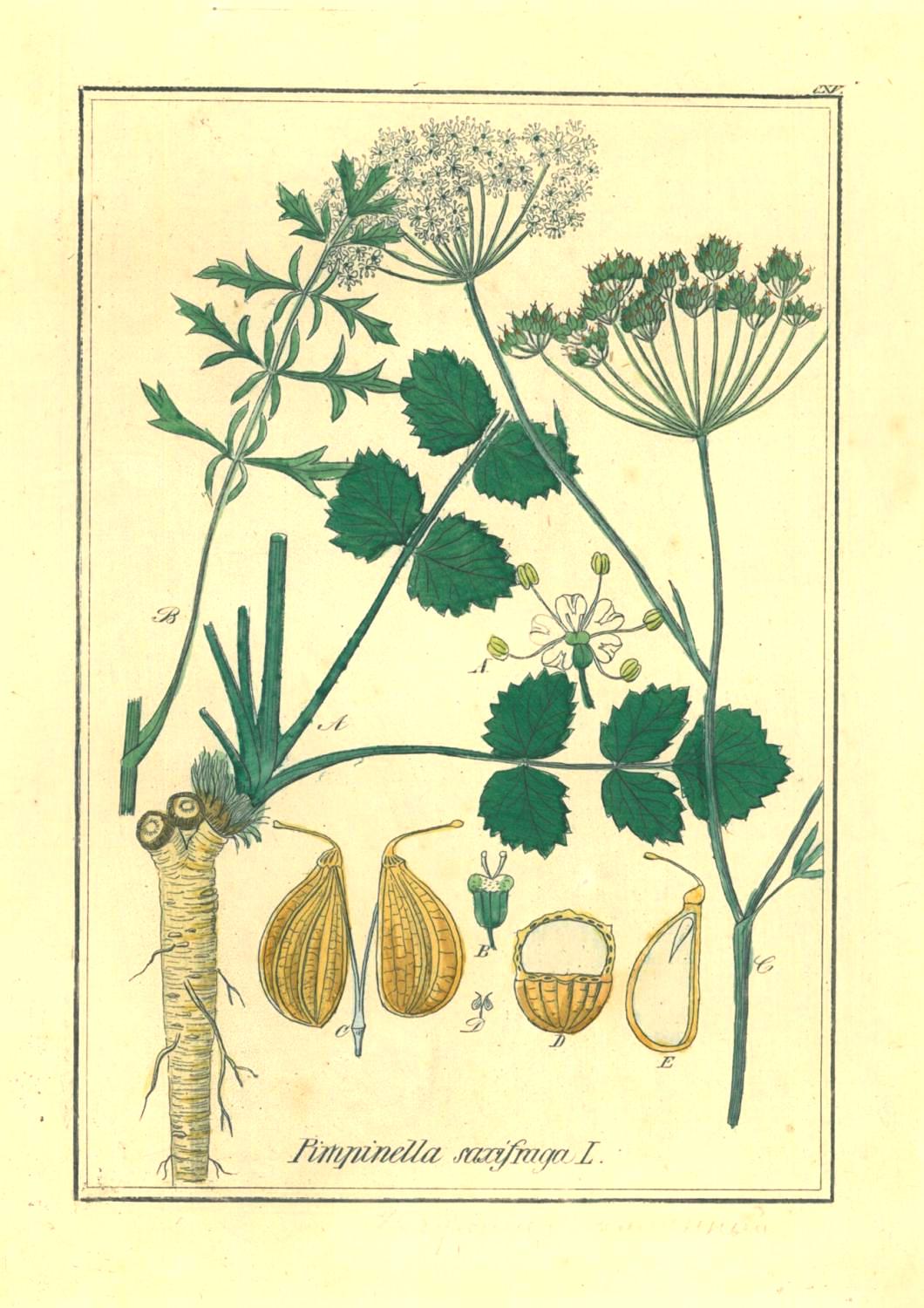 Description –
The Pimpinella saxifraga is a perennial herbaceous plant up to 80 cm tall, erect, branched.
The stem is hairless or with reflected hair, finely striated.
It has a taproot root up to 15 cm long.
The leaves are variable in size and shape, glabrous or hairy; the basal imparipinnate with 5 – 11 segments with an ovate perimeter, lanceolate; the upper caulinas divided into linear laciniae.
The flowers are carried in a compound umbrella with 6-15 unequal rays; without bracts or (rarely) deciduous, absence of bracts.
The flowers are mostly hermaphroditic, white or rarely pink, with obovate hairy petals on the edge.
It blooms between June and August.
The schizocarpic fruit is a polachenary (diachene) of 2-3.5 x 2-2.2 mm, ovoid or ellipsoid, smooth and hairless, with mericarp without prominent ribs.

Cultivation –
The Pimpinella saxifraga is a perennial plant that is collected in nature for local use as a food and medicine.
The plant can be grown in most soils but prefers dry alkaline soil in full sun or light shade.
Propagation can occur by seed and requires a period of cold stratification. If you can get fresh seeds, it is best to sow immediately. Germination rates are generally very good, so it’s probably best to do this in open field if you have enough seeds, or sowing in cold greenhouse pots is recommended.
Once germination has been obtained, the seedlings must be transplanted, as soon as they are manageable, in single pots and transplanted in open field in summer.

Customs and Traditions –
The Pimpinella saxifraga is a plant that grows spontaneously and very nutritious in the pastures for sheep and cattle, so much so that in the past it was cultivated on calcareous soils for forage.
It is a plant that is also used for edible and medicinal purposes.
For edible use, raw shoots and young leaves are used; these can be added in small quantities to mixed salads or used to impart a fresh aromatic flavor to refreshing drinks.
The leaves taste similar to parsley and the seeds are used as a condiment. These are coated with sugar and eaten as a jam.
An essential oil is extracted from the root which is used as a flavoring in desserts, etc. and gives a bitter taste to liqueurs.
For medicinal use it is a plant that has been used for a long time, being used mainly in the treatment of wounds and internally to facilitate digestion, soothe respiratory disorders and treat kidney and urinary diseases.
The leaves and the root are antispasmodic, astringent, carminative, cholagogue, diaphoretic, diuretic, emmenagogic, resolving and stomachic.
The root is anti-inflammatory, slightly astringent and expectorant; the fresh root is very hot and acrid, but this spiciness is greatly reduced when dried.
Chewed fresh root is effective in treating toothache and tongue paralysis. It is also used to calm coughs or the effects of laryngitis and bronchitis.
Also from the root is obtained a lotion that is used externally to help regenerate the skin of elderly people.
Distilled water is obtained from the plant which is used as an eye lotion.
Among other uses it should be remembered that an extract of the whole plant is used as an ingredient in commercial cosmetic preparations as a humectant.
An extract is obtained from the flowers, leaves and stems which is used as an ingredient in commercial cosmetic preparations as a skin conditioner.

Preparation Method –
Pimpinella saxifraga is a plant that is harvested when it comes into flower and dried for later use.
The root is harvested in the spring or fall and can also be dried for later use.
The young leaves are edible and the root was once used in folk medicine as a cough remedy.
Various extracts and distilled waters are obtained for medicinal and cosmetic uses.

One thought on “Pimpinella saxifraga”