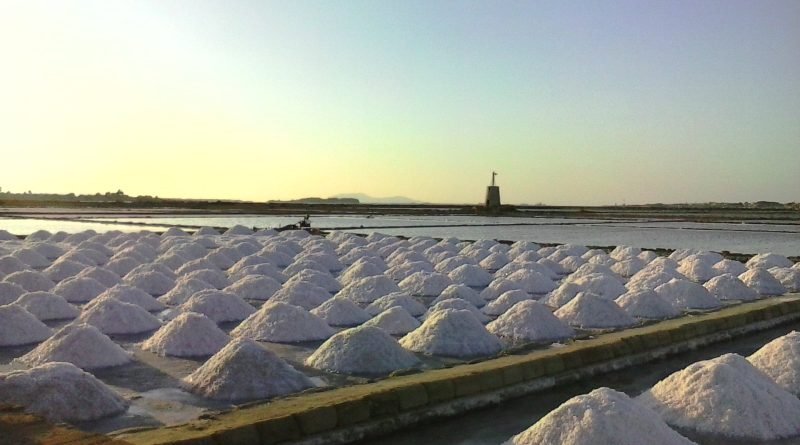 The Trapani sea salt is a product with a protected geographical indication, which is produced exclusively in the territory of the Free Municipal Consortium of Trapani and in particular in the municipalities of Trapani, Paceco and Marsala.

Origins and History –
The Trapani sea salt is therefore an I.G.P. regulated by the Consortium for the protection of the Consortium of artisanal sea salt of Trapani and recognized by provision: EU Reg. n. 1175 of 07.12.12 (OJEU L 337 of 11.12.12).
In April 2011 the Ministry of Agricultural, Food and Forestry Policies recognized the PGI for the salt produced under the name “Trapani sea salt”.
The name was added to the list of protected geographical indications by the European Commission on 7 December 2012.
Sale Marino di Trapani PGI is a very high quality salt produced exclusively in the salt pans of Trapani, Paceco and Marsala, scrupulously following the strict regulations approved by the European community. The best tanks, at the beginning of the year, are identified and reported as the most suitable for the production of Trapani PGI Sea Salt. From this moment on, each phase of the production process is carefully monitored and certified by the control body. Sale Marino di Trapani PGI is particularly rich in flavor.
The history of salt production in the area is lost in the mists of time.
It is certainly known that the first Trapani salt pans date back to the period of the Phoenicians. Defined at the time “white gold”, throughout the first millennium BC. the Phoenician people held the monopoly. However, the first real evidence of the presence of salt pans in the Trapani area dates back to several centuries later, in particular to the quotation in the Book for the entertainment of those who love to travel the regions of the Arab geographer Abd Allah Muhammad, dating back to 1154. Since 1440 the salt flats they were given in gabelle and this allowed them to spread on the Trapani coast, resulting in the development of the port of Trapani, from which ships loaded with the precious element left for European routes. Today the history of this ethno-anthropological cultural heritage is found in the Salt Museum of Paceco.
Currently this food supplement is produced by some local companies which, in addition to those that are part of Sosalt dei D’Alì, include: Cuordisale-Saline di Trapani, which manages Salinagrande (the oldest salt pan in Trapani) and Galia Teresina, the Salina Culcasi, Salina Calcara (around the Islet of Calcara), Salina Galia. In the lagoon of the Stagnone there are the Ettore and Infersa salt pans, also belonging to the D’Alì.

Geographic area –
The production area of ​​Sale Marino di Trapani PGI exclusively affects an area that includes the Municipalities of Trapani, Paceco and Marsala, within the Free Municipal Consortium of Trapani in Sicily.
Production is largely within the Saline di Trapani and Paceco nature reserve, where salt production is constantly increasing: from the establishment of the Reserve to today, production has gone from about 50,000 to about 80,000 tons / year. .

Description –
The Trapani Sea Salt is essentially composed of sodium chloride (NaCl) dissolved in sea water together with other substances. At room temperature it is a colorless crystalline solid with a characteristic odor and taste.

Production Method –
The Trapani sea salt is produced with ancient artisanal procedures in the salt pans of Trapani. The production takes place through a procedure lasting 5-7 months. Harvesting takes place during the summer, in the months of July and August.
In detail, the production system is as follows:
– The salt is produced inside the salt pans which are made up of a system of communicating vessels fed by the clean water of the sea of ​​the Egadi Islands Reserve, right in front of the coast on which the production basin of Trapani PGI Sea Salt stands. . These are divided into four large orders of communicating tanks, where a slow process of evaporation and transformation of marine waters takes place. The tanks of the first area, which is the area in contact with the sea, are called “fridde”, the tanks of the two intermediate areas are called “cultivation” and “caure” and the last, the one where the gradual phase of transformation, is called “salante” or “crystallizing”. The manufacturing process is marked by the meticulous intervention of the salt technicians who carefully monitor all the various manufacturing processes. Harvesting is done manually (up to three times within the same production season) or through the use of mechanical tools (only once a year or in multi-year cycles). The manually harvested salt is stored, by means of the winter covering with terracotta “tiles”, so that it can slowly get rid of residual moisture. Then the “peeling” takes place; the upper crust of each pile is removed to a depth of 1-2 cm, before being transported to the conditioning and packaging plants. For mechanical harvesting, on the other hand, special harvesting machines are used which are made to enter the tank to remove the crust of salt that has accumulated throughout the season. The processing techniques include: counter-current washing in water saturated with salt, centrifugation, mechanical grinding in local stone or stainless steel roller mills, drying in ovens with temperatures up to 250 ° C and mechanical screening.
Salt of Trapani PGI is an entirely natural product, that is, obtained without the use of additives, whiteners, preservatives or anti-caking agents, resulting in a particularly pure salt and therefore highly appreciated by the Italian and European canning industries. Being very rich in magnesium, its qualities also include maximum solubility.

Gastronomic use –
Salt Marino di Trapani PGI, due to its particular composition, can have various uses in the kitchen and, above all, for the preparation or seasoning of particular dishes. The product can be used in the preparation of fish (sea bream, snapper, sea bass), where the food is cooked in a salt crust, or it can be used to flavor game (partridges, pheasants, rabbits).
The product is marketed in the Saline Marino di Trapani IGP type. It is sold in special packaging for food use with a capacity ranging from 100 g up to 1000 kg.