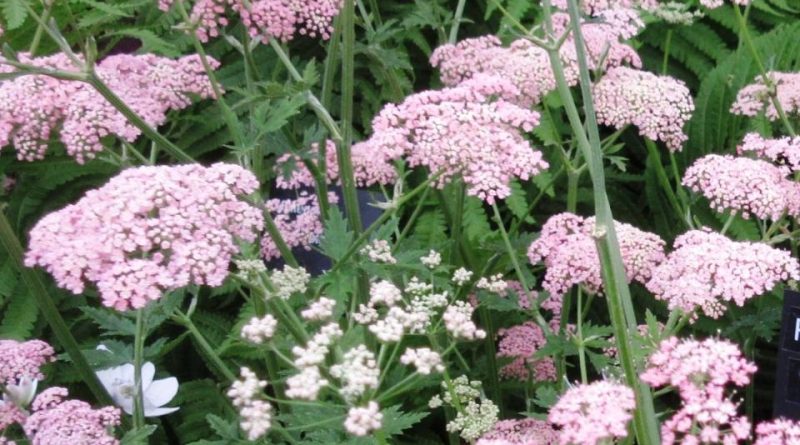 The greater burnet-saxifrage or hollowstem burnet saxifrage (Pimpinella major (L.) Huds.) is a herbaceous species belonging to the Apiaceae family.

Etymology –
The term Pimpinella could derive from the corruption of the Latin word bipennella / bipennula bipennata to indicate the arrangement of its leaves in pairs. For other authors it derives from the diminutive of pampinus pampino (perhaps due to the similarity of the leaves to those of the vine) or, finally, by correspondence with the Italian name of the Sanguisorba, again due to the similarity of the leaves.
The specific major epithet is the incorrect spelling, but valid, for maior, comparative form of magnus grande: greater, larger or longer (compared to other species of the same genus).

Geographic Distribution and Habitat –
Pimpinella major is a common plant in Central Europe, including Great Britain, from southern and eastern Scandinavia to Portugal, the Balkans and the Caucasus. She also naturalized in North America.
In Italy it is present in all the northern regions up to M. Pollino.
Its habitat is that of woods, meadows, pastures, clearings, road margins, coppices and ravines, with optimum in the mountain belt; it is common in woods crossed by fire and prefers nutrient-rich substrates, especially sandstones, and can be found from 0 to 2300 meters above sea level. 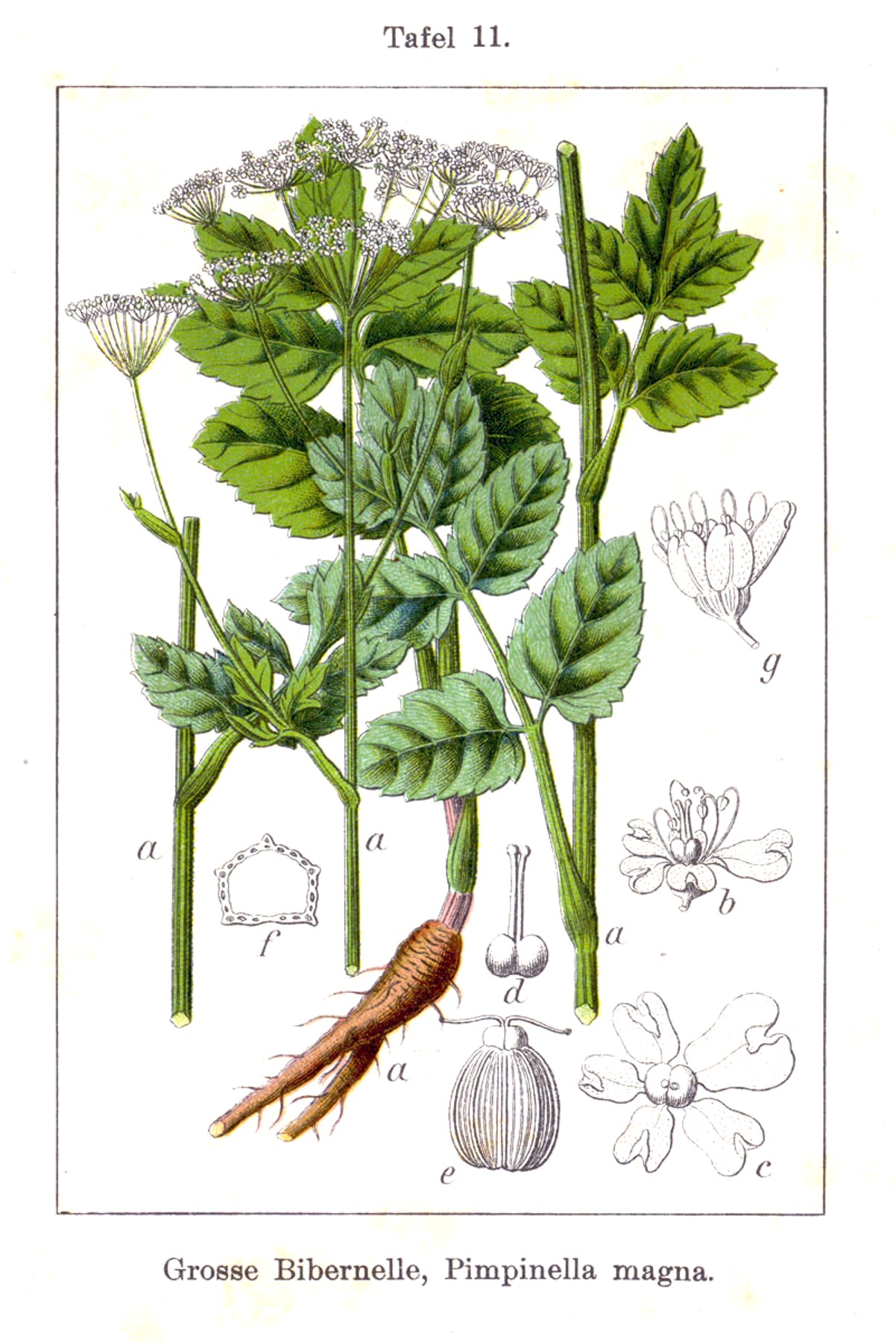 Description –
The Pimpinella major is a perennial herbaceous plant that reaches 30 – 100 cm in height.
The stem is hollow, mostly hairless, branched and leafy.
The leaves are dark green, shiny, ovate or oblong with a feathery appearance, very frayed and frequently have dots; the basal leaves are petiolate.
The inflorescence has a diameter of 50–60 mm; the flowers are usually hermaphroditic and vary from white to pink and form umbrellas with 11-16 rays.
The antesis runs from June to August.
The schizocarpic fruit is a polachenary of 2.5-3.7 x 1.5-3 mm ellipsoid, laterally compressed, with a surface also wrinkled and glabrous. The mericarps are oblong-ovoid with 5 slender non-winged ribs and numerous vines in each furrow.

Cultivation –
The Pimpinella major is a plant that, for some time, has been harvested in nature for local use as food and medicine.
However, it is a plant that can be easily cultivated in any soil with good fertility even if it prefers rather humid conditions; in fact it grows best in a cool position and the plants are resistant up to about -20 ° C.
The plant can be propagated by seed which requires a period of cold stratification. If you can get fresh seeds, it is best to sow immediately. This can be done directly in the open field if you have enough seeds, or if not, it is safer to sow in individual pots in a cold greenhouse.
It is advisable to sow stored seeds as soon as possible and probably best done in unheated seedbeds.
When the seedlings are large enough to be handled, they should be placed in individual pots and then transplanted in the summer.

Customs and Traditions –
Pimpinellla major is a plant that has been used in traditional Austrian medicine (herbal teas, flavoring milk or liqueurs) in treating respiratory tract disorders, fever, infections, colds and flu.
The plant contains various substances and essential oils, and is often used in folk medicine also for gargling in case of diseases of the oral cavity and as an expectorant.
Edible uses include the use of its essential oil, obtained from the roots, which is used as a flavoring in candies, liqueurs, etc.
For medicinal use the leaves are diaphoretic, diuretic, resolving and stomachic.
The root is anti-inflammatory, slightly astringent and expectorant.
Fresh root is very hot and acrid, but this spiciness is greatly reduced when the root is dried. In addition, the fresh root, when chewed, is effective in the treatment of toothache and paralysis of the tongue.
It is an effective diuretic, in fact the root is used in the treatment of disorders resulting from obstruction of the viscera.
The root is also used to calm coughs or the effects of laryngitis and bronchitis.
Furthermore, the seeds are carminative.
No other uses are known.

One thought on “Pimpinella major”