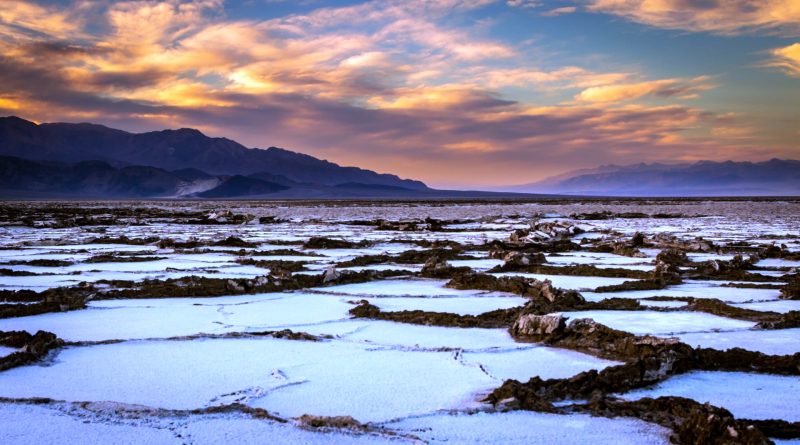 Death Valley National Park is a United States National Park whose territory falls within the states of California and Nevada, with a land area of ​​13,518 km².
Death Valley National Park was first recognized as a national monument (11 February 1933) and then as a park on 31 October 1994.
This park, like others in the United States, is managed by the National Park Service.
Death Valley is a desert area of ​​the United States of America located in the State of California and to a small extent in Nevada. Approximately in the center of the valley is the lowest point in North America.
The name of this area derives from the very particular climatic-environmental conditions that make the survival of many animal and plant species extremely difficult.
The origin of the name of the Valley of Death, however, dates back to the times of the gold rush.
In the winter between 1849 and 1850, nugget hunters tried to cross it but died in a desperate search for food and water. Despite this tragic event, the Valley of Death continued to attract the attention of many prospectors and several gold and silver mines were discovered between the end of the nineteenth century and the beginning of the twentieth century. In February 1933, the then President of the United States of America declared Death Valley a national monument. In that same year, to cope with the economic difficulties of the Great Depression, Franklin Delano Roosvelt founded the Civilian Conservation Corps, an ad hoc program with the aim of providing work to the unemployed. Some of them were specially sent to Death Valley to build roads, wells, campsites and telephone lines.
We must reach 1994 for the establishment of the Death Valley National Park.

Geography –
The Death Valley National Park includes the valley of the same name which is a depression that is part of the Great Basin and extends longitudinally from north to south, between the Sierra Nevada in California to the west and the State of Nevada to the east.
This valley is 225 kilometers long and an average of 40 kilometers wide.
The park is instead about 170 kilometers long and penetrates north for a short distance into Nevada and is bordered to the south by Owlshead Mountain (owl’s head mountain), which is separated from the Black Mountains by the Jubilee Pass (mountain pass). of the Jubilee), the southern gateway to the park. The northern limit of the park is close to Scotty’s Castle, the park’s northern gateway.
Towards the west the park is bordered by the Panamint Range which is formed northwards by the Cottonwood Mountains which continue southwards into the Panamint Mountains.
To the east the park is bordered by the Amargosa Range which includes the Grapevine Mountains to the north, which continue southwards into the Funeral Mountains and the two side-by-side groups of the Greenwater Range and the Black Mountains.
The Death Valley basin has sunk 86 meters below sea level. The lowest point is located in Badwater, a valley dominated to the east by the gullies of the Black Mountains, right at the point where Dante’s View is located and to the west the saline stretches, called Devil Golf Course and you can see the high Telescope Peak on the horizon 3 300 meters.

Geology –
The oldest rocks in Death Valley were formed about 1.8 billion years ago and have undergone so many changes that they are almost indecipherable.
Rocks dating back about 500 million years found in the Panamint and the Funeral Mountains are made of sandstone and the limestone indicates that the place was a warm, shallow sea, which was at the Equator, during most of the Paleozoic era (570-250 million years ago).
Over time the sea began to slowly recede towards the West while the land was pushed upwards and towards the North. This thrust was due to subduction movements, those of magma far below the earth’s surface.
Since the Death Valley is located in an area adjacent to the boundary that separates two plates, as the plates moved slowly against each other, the compressive forces gradually bent, deformed and fractured the thin crust. This widespread deformation of the rock and its rise occurred during most of the Mesozoic era (250-70 million years ago). Active periods of building (uplifting) the mountain alternated with calm periods in which the forces of erosion worked to break up and remove what the mountains had erected.
Subsequently, the Death Valley was mainly influenced by the volcanic activity that took place in most of the Tertiary Period (70-3 million years ago). As the mountain’s elevation increased the earth’s surface, the crust became brittle. Hot, molten magma beneath the surface sprang up and erupted at these weak spots. Volcanic jets first appeared in the Northeast, Nevada and covered the Death Valley region with numerous layers of ash and lapilli.
After various geological vicissitudes that have totally remodeled the landscape, we have arrived at the present day in a condition that is in any case in constant evolution.
Within this valley, Zabriskie point and Badwater Basin are just some of the most beautiful places worth visiting for those who want to have a different experience in the American Far West away from the noise of the big cities of the United States.
Zabriskie point is formed by sediments generated by the ancient Furnace Creek lake which no longer exists and which previously occupied the Valley of Death; Zabriskie point offers visitors an unreal naturalistic scenario. The compounds of saline mud and gravel together with the lapilli of nearby volcanoes have formed a layer of harder lava over time: the orogeny then created the spectacle that today welcomes visitors. The place takes its name from Christian Brevoort Zabriskie, director in the first half of the twentieth century of the Pacific Coast Borax Company, a company that extracted borax, the mineral present in the Furnace Creek area. Director Michelangelo Antonioni dedicated the 1970 film of the same name to Zabriskie point. If only to pay homage to Italian cinema, this particular point of Death Valley is a must-seen.
Badwater Basin is instead located in the Furnace Creek area and 86 meters below sea level, it is conventionally referred to as the lowest point in North America. It is a basin where the water evaporates, forming salt polygons. It is one of the most characteristic places in the Death Valley with these blocks of salt that create particular chromatic games in reflecting the lights of dawn and dusk. Photography enthusiasts will certainly appreciate the magic of the place. 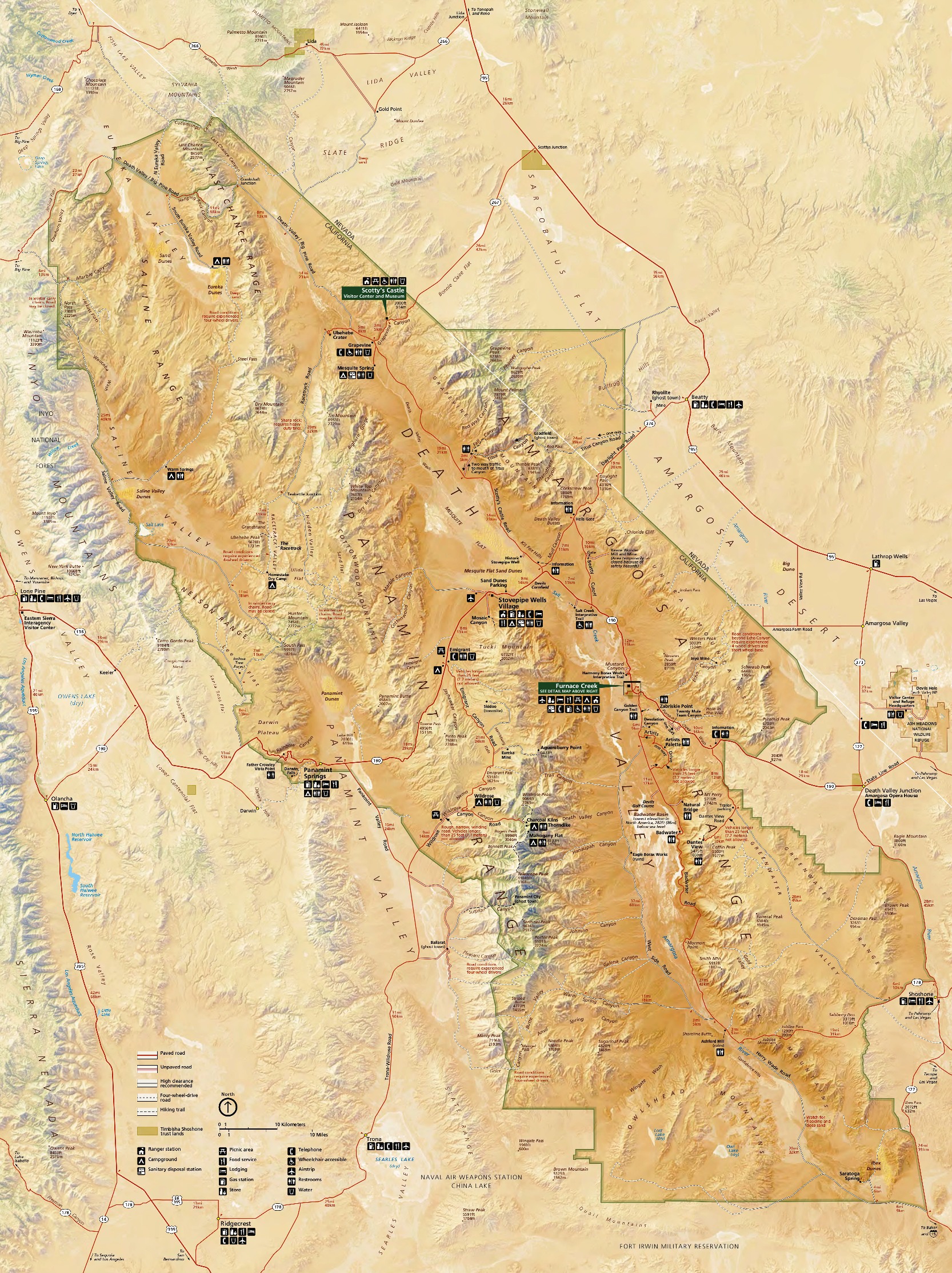 Climate –
Death Valley is characterized by a climate that is part of the climatic zone of the Mojave Desert and is very hot. Due to the orographic arrangement, 3 to 6 centimeters of water per year rains throughout the territory, depending on the year, consequently there is no catchment area with a river, there is only a small perennial spring at Furnace Creek.
In the period from May to September, the daytime temperature averages 50 ° C with peaks even over 54 ° C. The night falls to values ​​between 28 and 37 ° C.
The situation is much better in the winter months, when the average temperatures are between +26 ° C and +20 ° C. As in all desert areas, the decrease in temperatures after sunset is in fact caused by the absence of radiation, favored by clear nights and the almost total absence of winds.
During the summer, due to the very high daytime temperatures, it is not possible to drive around during the day. The best times recommended to get there are in the afternoon, from 17 onwards, and in the early hours of the morning from 4 to 9. The greatest influx of domestic tourism is recorded out of season, especially in winter, a period in which, after short but intense phases rainy days, it is possible to observe the phenomenon of the flowered desert.

Flora –
In Death Valley there are 600 types of desert plants and flowers, adapted to high temperatures, strong winds, water scarcity, or water with a high salt content. Many plants grow crushed on the ground due to the wind, others develop long roots or branched roots to use the little water available. Some plants have a natural lacquer or cover to reduce evaporation loss, others shed their foliage during the dry season. Some plants are able to survive using water that contains up to 5% salt.
In this area, the halophilous steppe dominates with the sagebrush (Artemisia tridentata). The most common plants are Stickring Boerhaavia or Wetleaf spiderling (Boerhaavia anulata), Sunflower or Desert gold (Geraca canescens), Mohavea (Mohavea brevifloris), Golden primrose (Oenothera brevipes), Spot Mallow or Desert Five-spot ( Malvastrum rotundifolium).
Within the Death Valley National Park the most common flowers of the mountains and canyons are the Mariposa Lily (Calochortus kennedyi), the Strawberry cactus (Echinocereus engelmannii), the Panamint Daisy (Enceliopsis covillei), the Bear poppy (Arctomecon meriamii) ), the Stream Orchis (Epipactis gigantea), the Prickleleaf (Hecastocleis shockleyi) and the Desert holly (Atriplex hymenelytra), located near the Ubehebe crater.