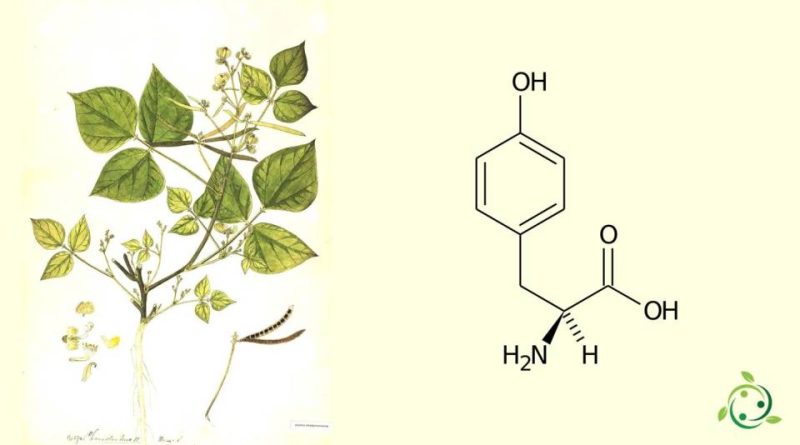 Tyrosine, whose term in the official IUPAC nomenclature is: 2 (S) -amino-3- (4-hydroxyphenyl) propanoic acid is a polar amino acid with a chiral molecule.
Tyrosine is also known by the abbreviations: Y and TYR and has a brute or molecular formula: C9H11NO3.
Tyrosine was discovered by the German chemist Justus von Liebig within casein, and the name tyrosine is Greek tyros, which means cheese.
The L-enantiomer is one of 20 ordinary amino acids and its side group is a p-hydroxybenzyl.
Tyrosine is a non-essential amino acid for the human body as it is able to synthesize it.
Tyrosine is biologically important as it is a precursor of various hormones, such as thyroxine (a thyroid hormone) and catecholamines (dopamine, noradrenaline and adrenaline), and of melanin.

Biosynthesis –
Tyrosine is produced in plants and in most microorganisms from prephenate, an intermediate of the scichimic acid pathway. Prephenate undergoes NAD-dependent oxidative decarboxylation with hydroxyl retension, giving rise to p-hydroxyphenylpyruvate, subsequently subjected to a transamination reaction where glutamate is the donor of the amino group.
Mammals have the ability to synthesize tyrosine from the essential amino acid phenylalanine (phe), which is introduced through food. The conversion of phenylalanine to tyrosine is catalyzed by the enzyme phenylalanine hydroxylase, a mixed function oxygenase that uses a pterin cofactor, tetrahydrobiopterin. This enzyme catalyzes the conversion reaction by adding a hydroxyl group on the carbon atom at position 6 of the phenylalanine aromatic ring.

Property –
Tyrosine is a valuable amino acid for the proper functioning of our brain. Regulates mood and stress response. It is the precursor of important neurotransmitters that regulate mood and cognitive abilities, such as dopamine, adrenaline and noradrenaline.
For this reason it is used in the treatment of depression, sleep disorders and attention deficit. It also improves the body’s adaptive response to stress, so much so that it was used by fighter-bomber pilots.
It is also used in sports use.
Tyrosine is an amino acid precursor of catecholamines (adrenaline, noradrenaline and dopamine) in the brain, and its supplementation has been found to accelerate the synthesis of these molecules in the sympathoadrenal system. Studies on the effects of tyrosine supplementation in sports have not recorded relevant effects on performance even at high doses. Tyrosine showed no improvement in performance even when combined with carbohydrates.
Some empirical evidence suggests that tyrosine may have an impact as a stimulant when taken as a pre-workout supplement in conjunction with other substances, exerting a synergistic effect. Animal studies have shown that tyrosine may potentiate the effects of the caffeine / ephedrine combination.

Excess tyrosine –
Excessive tyrosine intake has been linked with eye damage, growth retardation and decreased appetite. However, tyrosine is generally well tolerated and only a small percentage of individuals have complained of nausea, headache, fatigue, heartburn and joint pain after taking it.