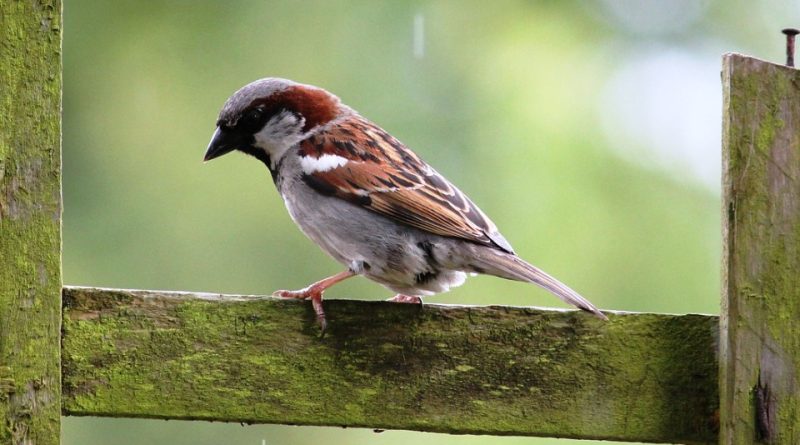 The house sparrow (Passer domesticus Linnaeus, 1758) is a bird belonging to the Passeridae family.

Geographic Distribution and Habitat –
The house sparrow is a bird with an original range extending from Europe to North Africa to Asia. Following repeated introductions by man, it has also naturalized in America, southern Africa and Oceania, becoming a de facto species with a cosmopolitan distribution.
However, the range of this species does not include Italy, with the exception of some border areas.
The habitat of this species is closely associated with human settlements and its agricultural activities. The only terrestrial habitats that the house sparrow does not inhabit are the dense forest and the tundra. Well adapted to living around humans, it often lives and also breeds indoors, especially in factories, warehouses and zoos.
It reaches its maximum density in urban centers, but its reproductive success is greater in the suburbs, where insects are more abundant.
On a larger scale, it is more abundant in grain-growing areas as in some grain areas of the world.
It tolerates a variety of climates but prefers drier conditions, especially in humid tropical climates.
It also has several adaptations to arid areas, including a high tolerance to brackish areas and the ability to survive without water by ingesting berries.
In most of East Asia, this species is completely absent.
In most of its range, the house sparrow is extremely common, although for some years the population has been declining in various parts of Europe, most likely, according to the latest research, due to the use of pesticides in agriculture. 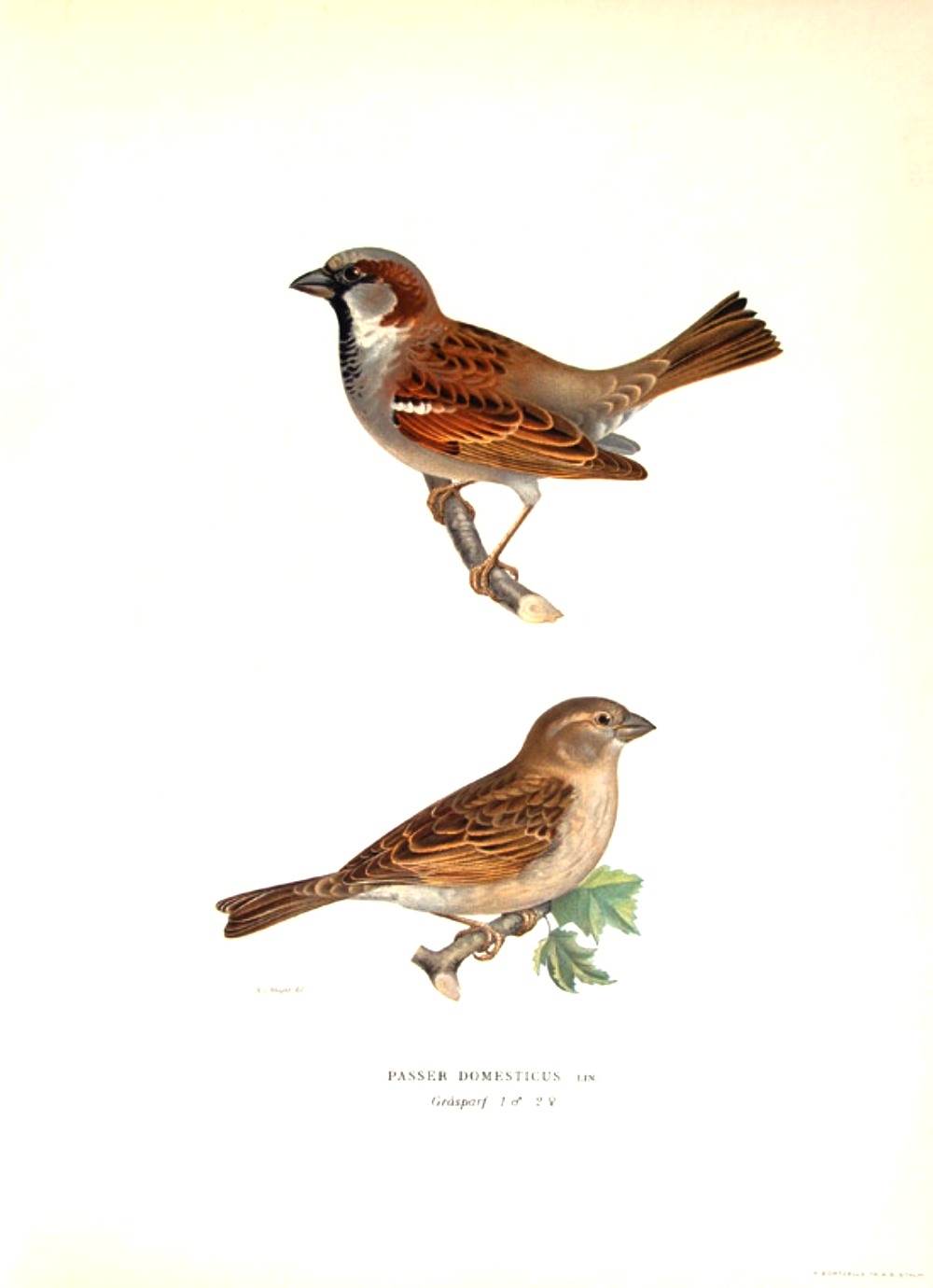 Description –
The Passer domesticus is a small bird with a total length of 15-16 cm, a wingspan of 24-30 cm, for a weight ranging between 27 and 34 grams and which has an evident sexual dimorphism.
The upper plumage is brown-brown in the male and brown-greyish in the female, with longitudinal brown streaks, below white-greyish; in the young it is similar to the female.
The beak is short, conical, brown; which becomes black in spring-summer in the male.
The head has whitish cheeks, paler in the male, with black chin and throat always in the male.
The wings have a whitish bar which is more evident in the male.
The tail is of medium length, slightly notched.
The legs are of medium length, light.
The voice is characterized with most of the vocalizations which are variations on its short and incessant chirping. This is reported as a: chirrup, tschilp or philip; which is a call of contact between birds that flock or rest, or from males to proclaim ownership of the nest and invite mating.
In the breeding season, the male gives this call repeatedly, with emphasis and speed, but not much rhythm, forming what is described as a chant.
The young birds also give a true song, especially in captivity, a warbling similar to that of the European greenfinch.
Aggressive males give a trilled version of their call, transcribed as “chur-chur-r-r-it-it-it-it”. This lure is also used by females in the breeding season, to establish dominance over the males as they move them to feed the young or to incubate the eggs.
To these vocalizations others are added for particular moments of their life as a real language.
This bird has a flight with rapid beating of wings, swaying.

Biology –
Passer domesticus is a very sociable species, in fact it can live in groups of about ten specimens that often approach humans to look for food.
The male prepares more nests, in the most disparate but always comfortable places: under the tiles, in the crevices of buildings and occasionally on the trees. The main component of the nests is straw, which it then stuffs with feathers from other birds; the entrance to the nest is always lateral.
In spring, the female, who will be attracted to one of the nests prepared by the male, will lay 4 to 8 eggs there.
The incubation lasts 13-14 days, with 2-3 broods per year and the litter is weaned from both parents.
The offspring are nidicolous and fly away at 14-18 days.
It lives on average 5 or 6 years.

Ecological Role –
The house sparrow is a very sociable species, in fact it can live in groups of about ten specimens and often, as mentioned, it approaches humans in search of food.
Furthermore, it is not a migratory species and is sociable even during the hatching period.
However, limited migrations occur in all regions. Some young birds disperse over long distances, especially on coasts, and mountain birds move to lower altitudes in winter.
Two subspecies, P. d. bactrianus and P. d. parkini, are mainly migratory. Unlike birds of migrating sedentary populations, birds of migratory subspecies prepare for migration by gaining weight.
Its diet is mainly granivorous but in summer it does not disdain larvae and insects.
Passer domesticus has an extremely large range and population and is not seriously threatened by human activities, so it is rated as least concern on the IUCN Red List.
The IUCN estimates for the world population reach nearly 1.4 billion individuals.
However, populations have declined in many parts of the world, especially near its Eurasian places of origin.
These declines were first noted in North America, where they were initially attributed to the spread of the house finch, but were most severe in Western Europe.
The decline is not universal, as no serious decreases have been reported from Eastern Europe, but they also occurred in Australia, where this species was recently introduced.
The dramatic decrease in the population is attributed to various causes, including:
– predation, in particular by Eurasian sparrow hawks;
– electromagnetic radiation from cell phones;
– diseases such as avian malaria;
– shortage of nesting sites caused by changes in the design of urban buildings;
– an insufficient food source caused by the decrease in the populations of some insects; the decline in insect populations derives from an increase in monocultures, the massive use of pesticides, the replacement of native plants in cities with introduced plants and parking areas;
– another cause under analysis is perhaps the introduction of unleaded petrol, which produces toxic compounds such as methyl nitrite.
To overcome this sharp decline, various solutions are hypothesized such as:
– protect insect habitats on farms and plant native plants also in built-up areas;
– agro-logical techniques and net decrease in the use of pesticides;
– the creation of urban green spaces.

One thought on “Passer domesticus”