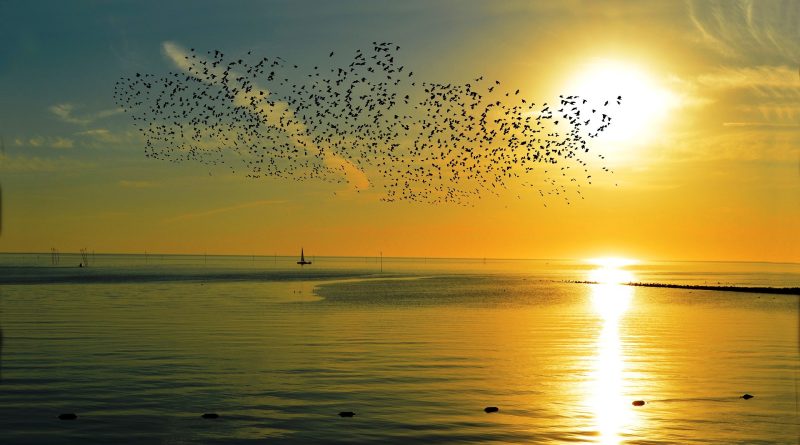 The silence of the lambs

The Silence of the Lambs is the title of a well-known 1991 film, which tells the story of a mad and sadistic serial killer who kills and tears apart the bodies of young girls.
Now this title takes on a broader meaning.
The silence of the innocents is the subject of the deafening quiet that has characterized our skies in recent years.
We are talking about the presence and flight of birds, an increasingly reduced presence that triggers, if ever there was a need, not one but infinite alarms.
This is the data of a new study by BirdLife International, the Ornithological Society of the Czech Republic and the Royal Society for the Protection of Birds (RSPB) which analyzed and compared the data of 378 of the 445 native species in European countries and in Great Britain.
According to this research, there has been a numerical decline in bird populations from 17 to 19% of species, between 1980 and 2017. In 40 years they have become less and less numerous in our skies, in addition to the house sparrow (Passer domesticus Linnaeus, 1758 ), also the yellow dancer (Motacilla cinerea Tunstall, 1771); 97 million less; starlings, down by 75 million and larks down by 68 million.
The species most affected are those that, in some way, have a relationship and a relationship with agricultural activities, responsible, with increasingly intensive practices, for the erosion or loss of habitat and the use of pesticides that kill above all the insects of which the birds feed.
The high entropy of agricultural production systems equally and negatively affects long-distance migratory species, such as the common whitethroat (Sylvia communis Latham, 1787) and the yellow wagtail. The disappearance from cities, for example of house sparrows, is attributed to a number of causes but not all identified, including lack of food, loss of biodiversity, air pollution and avian malaria.
Ultimately since 1980, in Europe, intensive agriculture and other human activities have caused the disappearance of between 600 and 900 million specimens of the most common species of birds: practically one in six. The decline has particularly affected the house sparrow, 247 million fewer than 40 years ago.
This research is combined with the data of another research of a few years, carried out by a research team, led by the biologist Xosé Luis Otero of the Departamento de edafoloxía e química agrícola of the Universidade de Santiago de Compostela.
The research focused on decreasing the amount of nutrients that seabirds transfer from the ocean to land through their guano. The research team has put together what is known about their physiology with a global inventory of the populations of these birds. The results are extraordinary: in fact, in the world there are about 800 million seabirds that excrete about 591 million kilograms of nitrogen and 51 million kg of phosphorus per year, nutrients that first concentrate around their colonies and then spread in the coastal ecosystems and around the world.
The consequence of the activities and digestion of seabirds is that they diffuse nitrogen and phosphorus, essential for life and the availability of which often determines the presence and abundance of vegetation in an ecosystem. For these populations too, human activities now have an impact similar to that of the basic biochemical processes of our planet. So too seabirds, with their rapid disappearance, are rapidly depriving us of their indispensable “ecosystem services“.

He is an exception to this gruesome picture, which makes us glimpse a way to go, some species, especially birds of prey. 203 of the 378 species studied have in fact increased in number. 66% of the additional 340 million birds came from just eight booming species: blackcap, lupine, blackbird, wren, goldfinch, robin, wood pigeon and blue tit. There are 11 species of birds of prey more than doubled since 1980, including peregrine falcon, marsh harrier, buzzard, white-tailed eagle and golden eagle. However, it must be said that, from a weight point of view, these are relatively rare species for which their populations, in the total count, add very little.
According to the hypotheses put forward by the scientists who carried out the study, it is likely that these birds of prey benefited from greater protection and reduction of harmful pesticides and hunting, as well as specific species restoration projects. The Birds Directive and the EU Habitats Directive have also provided legal protection to priority species and habitats that have benefited these bird species. In short, the confirmation that an ever greater protection of ecosystems is needed.
In this regard, for researchers, the summit of the UN Convention on Biological Diversity, scheduled for 2022, will be crucial to build a solid framework for the prevention of extinctions and to recover the lost abundance of many species.
Recent European strategies, such as Biodiversity 2030 and Farm to Fork, are a sign of hope.
The issuance in Sicily of the L.R. 21/2021 on agroecology is a first example of an implementation model of these strategies but, now, even more needs to be done.
The more does not belong only to the regulatory sphere, it belongs to all of us: “We need transformative action throughout society to tackle the crises of nature and climate together”, in the words of researcher Fiona Burns.
Which translated into practical and concrete terms means making a global transformation towards agriculture respectful of nature, the protection of species, sustainable forestry and fishing and rapidly expanding the network of protected areas.
In practice, the junctions around which the current model of agri-food production is to be carried, which, according to the latest estimates of the Climate Change, Agriculture & Food report, contributes 34 percent to climate change and much more for its ecological effects.
Despite the detractors of the Farm to Fork Strategy and therefore of the agroecological conversion of our way of producing (which often know little or nothing about the thermodynamics of complex systems and the economy of Nature) this is the only way.
Not an easy path, which requires not only rules but awareness, disclosure, meetings, sharing, co-responsibility.
This is the time of reconciliation with Nature; this is the time for a fuller awareness, not made up only of numbers and markets but of all the variables that make Life fuller and freer.
Let us remember that, to put it like the American poet of Serbian origin, Charles Simic, “The birds sing to remind us that we have a soul” and all this indicates that for a time, now too long, we have thought with a reason born of a lesser god because he has no soul.

One thought on “The silence of the lambs”