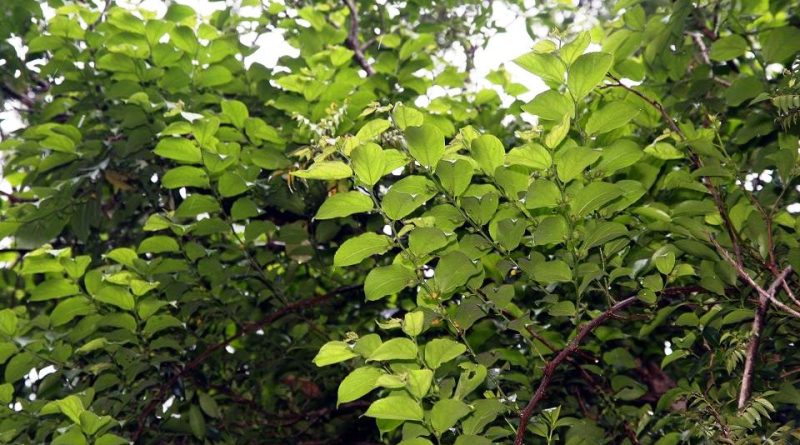 Etymology –
The term Picramnia comes from the Greek πικρός picrόs bitter and from θαμὰ thamà in large numbers: because all parts of the plant are bitter
The specific antidesma epithet comes from the Greek ἀντί antí against and from δεσμός desmόs bond, rope, halter (in a broad sense what blocks, which produces paralysis like a poison): a plant that was used in Jamaica as an antivenom.

Geographic Distribution and Habitat –
Picramnia antidesma is a plant native to the West Indies where the tree reaches a considerable height and thickness in Jamaica and southern Guiana.
Its habitat is that of humid forests, frequently on volcanic soils and along streams, in an area that also includes tropical Mexico up to the northern part of South America. 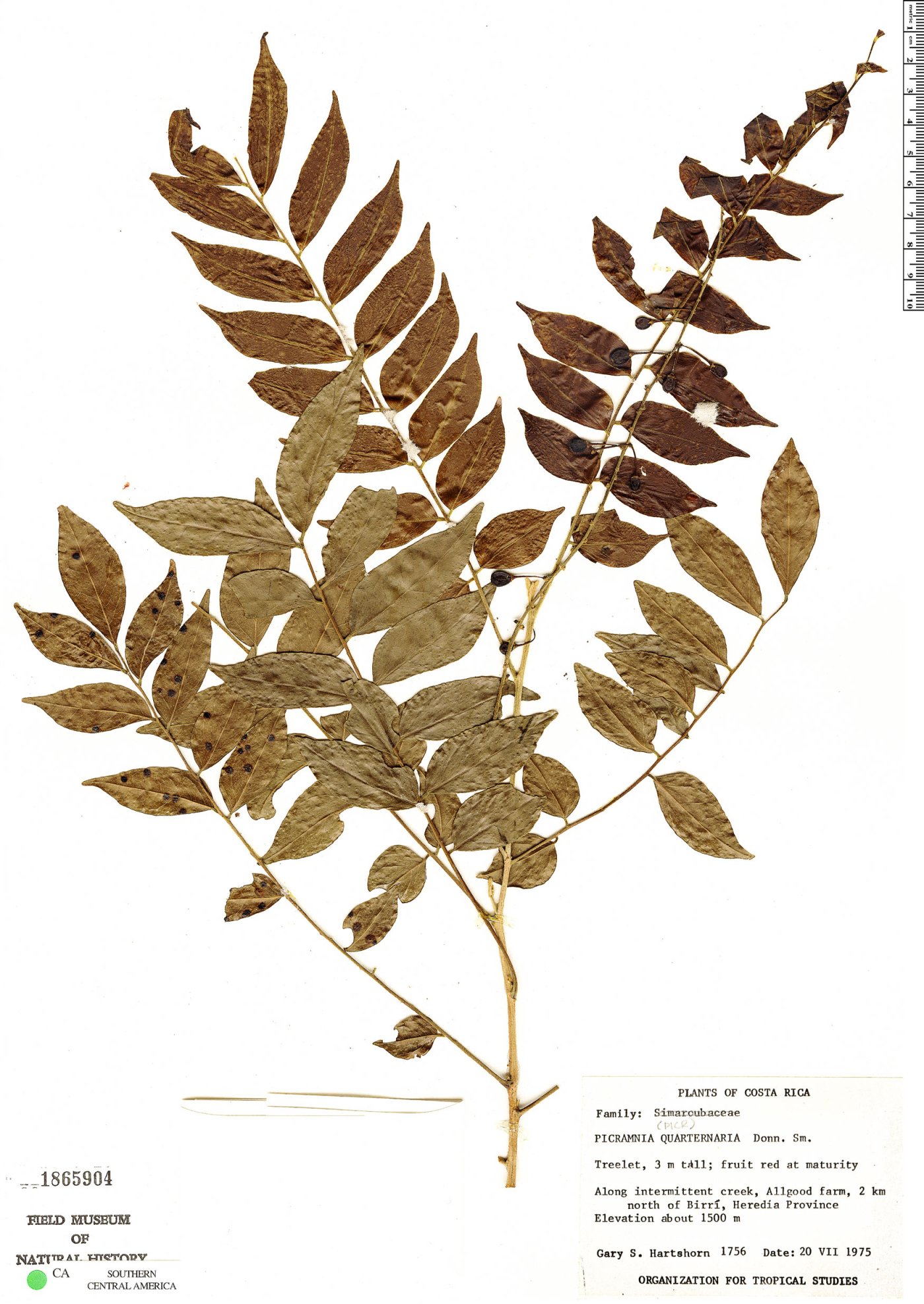 Description –
Picramnia antidesma is a plant with a 2-10 (-15) m tall arboreal or shrubby habit. with branches with alternating diffusion.
The bark on old trees is black and furrowed, on younger trees it is smooth, gray in color, spotted with large patches of yellow; the wood is hard, white and without any particular flavor.
The leaves are numerous, composed of 9-14 leaflets, leaflets from glabrous to glabrescent on the upper side, from pubescent to glabrescent on the lower one; terminal leaflets from elliptic to obovate, 5,4-7,8 cm long and 2-3,5 (-4) cm broad, with caudate apex, base cuneate or occasionally more or less oblique and rounded; the distal lateral leaflets are similar to the terminals but with more oblique bases; leaflets which become shorter, proportionally wider and more oblique as they approach the base of the leaf. The petiole is 2-3.6 cm long, the rachis, including the petiole, 11-20 cm long.
Male and female flowers are found on different trees.
They are grouped in a racemous inflorescence, pendulous, subterminal or deriving from young shoots, 10-35 cm long, pistillate racemes with 30-60 flowers, staminate with 70-120, 3-4-meri flowers, 1 – various arranged in fascicles along the length of the bunch, yellowish-green; staminate flowers with elliptical sepals, 1.3–1.5 mm long and 0.7–0.8 mm wide, pubescent, closely obovate petals, 1.5–1.8 mm long and 0.4–0.5 mm wide mm, hairless, filaments 1.8–2.5 mm long, anthers 0.3–0.4 mm long; pistillate flowers with broadly elliptical to ovate sepals, 1.2–1.4 mm long and 0.8–0.9 mm wide, pubescent, obovate petals when 3, 1.3–1.5 mm long and 0 broad, 6–0.8 mm, and strictly elliptical when 4, 1.6–1.8 mm long and 0.4–0.6 mm wide, hairless or with a basal and central pubescence line; ovary very broadly ovate, 1-1.4 mm long and 1-1.2 mm broad, stigmatic wolves 2, papillary, each 0.2-0.5 mm long.
The berries are broadly ellipsoid, 0.5–1 cm long and 0.4–0.8 cm broad, red when ripe, then black, persistent stigma lobes at the apex of ripe fruit; fruit pedicels 10-25 mm long, dilated and at least in their insertion at the base of the fruit strictly obconical, open and persistent sepals in the fruit.

Cultivation –
The Picramnia antidesma which grows naturally in humid forests, especially on volcanic soils and along streams.
For its cultivation it is possible to start from seed or from cuttings but it is necessary to choose areas with humid soils, preferably draining and in areas with partial shade.

Customs and Traditions –
Picramnia antidesma is a plant whose bark was brought from Guiana in 1713 as a remedy for dysentery. In France in 1718-1825 an epidemic flow was cured by the bark and this confirmed its medicinal use in Europe.
The bark is rough, scaly, of a beautiful yellow color, but paler when dry; it has very little smell and taste and although very bitter it is not unpleasant.
It is macerated in water or rectified alcohol giving a yellow tincture.
With this an infusion is prepared which is better and stronger in cold water than in boiling water.
A decoction can also be prepared which is transparent yellow when hot, but when cooled it is cloudy and brownish red in color.
Among the medicinal properties of this plant it should be remembered that it is: purgative, tonic and diaphoretic.
It is a very precious bitter tonic, useful in diarrhea, dysentery and some forms of indigestion; in large doses it is said to act as an emetic. It restores tone to the intestine, calms spasmodic movements, promotes healthy secretion.
Be careful because large doses cause vomiting and nausea; they should not be used in dysentery accompanied by fever. In dysentery with weak indigestion it is often preferred to chamomile.

Preparation Method –
Picramnia antidesma has been used for a long time in the areas of origin of the plant. of this are used for medicinal purposes: the bark and the bark of the root.
With these, decoctions and infusions are prepared and tinctures are obtained for various healing purposes.