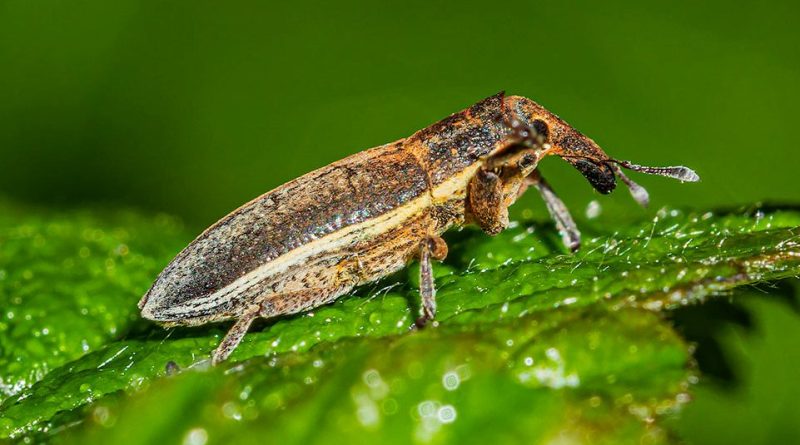 The Chard Weevil (Lixus juncii Boheman, 1835) is an insect belonging to the Curculionidae family.

Geographic Distribution and Habitat –
The Chard Weevil is a widespread beetle in an area that includes central, southern Europe and North Africa.
It is present in Italy especially in the central and southern areas.
This insect is polyphagous and is present where seed and sugar beets, chenopodiacee (Atriplex halimus, Atriplex hastatum, Spinacia oleracea), Cruciferae (Brassica campestris and Brassica oleracea), broad beans, Lychnis alba, Rumex acetosa, and others grow or are cultivated. plants still.

Morphology –
The Lixus juncii is a Curculionide with a variable length between 10 and 15 mm, with a characteristic rostrum.
The livery is dark gray – blackish, with slight yellowish shades due to a light pruinose layer that covers the external part of the integument.
Under the elytra there is a white border which is a physical characteristic that distinguishes this species from other weevils.
The larvae are whitish in color, tapered in shape, apod.

Attitude and Life Cycle –
Lixus junci is a beetle that overwinters in the ground at the adult stage.
Arrived in the spring period, between April and May, it gradually moves to the fields of Swiss chard, or other plants, where it carries out its trophic activity.
The oviposition generally takes place in small niches dug by the females in the central rosette at the height of the collar. Each female lays an average of 40 to 50 eggs.
The newborn larvae immediately descend into the taproot, digging long vertical tunnels that fill with metabolic residues.
The cycle is completed inside the plant and already in the first summer months you can see the adults wintering.
In this way the Lixus junci makes only one generation per year.
The damage is determined by the larvae that dig vertical and internal tunnels along the whole taproot; often the gallery begins at the level of the collar.
Wintering adults cause leaf erosion.

Ecological Role –
Lixus juncii is a beetle that lives at the expense of plants belonging mainly to families such as: Brassicaceae, Chenopodiacee, Fabaceae and others.
It has an annual generation and is controlled by some natural predators; among these we mention two Tachinid Diptera: Rondania cucullata and Zeuxia cinerea which are important parasitoids of adults and larvae respectively. Furthermore, there have been encouraging results, in biological control tests of the larvae, with entomoparasitic nematodes applied to the soil (gen. Heterorhabditis).
To avoid the increase in the populations of Lixus juncii, appropriate agronomic and agroecological techniques must be implemented.
Agronomic practices essentially consist in the search for rotations that allow the soil to rest for at least 4-5 years; the purpose of the rotation is to reduce the pest potential, especially in case of serious infestations in previous years.
Furthermore, the implementation of adequate rotations with plants not affected by the phytophagus contributes to significantly reducing the presence of the insect.
Up to now, chemical control programs have been carried out, with the criteria of guided and integrated struggle, against adults, before oviposition.
The treatments were performed after a careful evaluation, by means of accurate and frequent checks, of the population present; the sampling can be carried out with trap-pots (at least 2-3 series of 5 pots) placed, from the beginning of April to the end of June, a few meters from the edges of the plots and buried with the upper opening at ground level. In this case the threshold is 2 adults caught per pot per week.
The treatments are performed at the appearance of the first adults and, generally, are 1 or 2 (the second after about 10-15 days from the first).
However, this system is only a device that does not eliminate the cause which must instead be rebalanced in the planning phase of the crops, agronomic techniques, associations and rotations.
The effect of chemical treatments in the medium to long term alters the parasitic biocoenoses and the dynamics of populations of the fauna and entomofauna present.