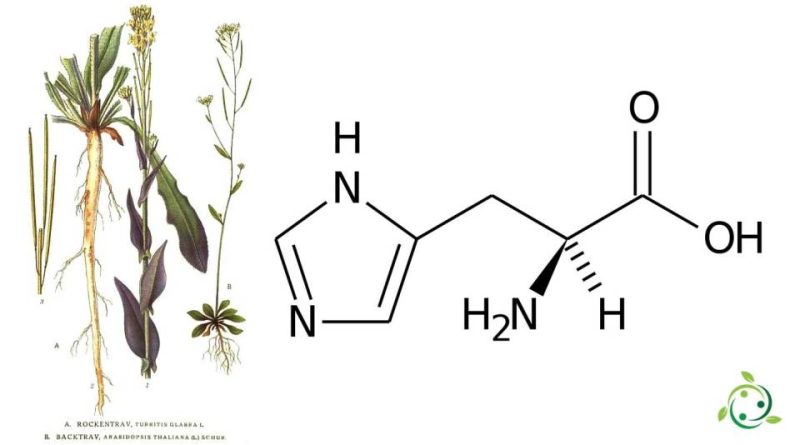 Histidine, better known as L-histidine and abbreviated with the terms H and His, is an amino acid.
Histidine was first isolated in 1986 by the German physicist Albercht Kossel and Sven Hedin.
In the official IUPAC terminology it is: 2 (S) -amino-3- (4-imidazolyl) propanoic acid; L-3-imidazol-4-ilalanine and has a brute or molecular formula: C6H9N3O2.
Histidine is an amino acid whose side group bears an imidazole ring. It is encoded by the CAU and CAC codons, and is a polar and chiral molecule.
This amino acid due to its particular composition is classified as positively charged at physiological pH.
Its L-enantiomer is one of the 20 ordinary amino acids of biochemistry, considered essential in humans for children and during development.
It is also recalled that histidine is a precursor of the biosynthesis of histamine, a vital inflammatory agent in immune responses.
Histidine is obtained by hydrolysis of numerous protein substances.
From the physical point of view it occurs in colorless, optically active crystals, soluble in water, insoluble in alcohol and in ether, which by decarboxylation are transformed into histamine. It can be obtained by synthesis in different ways. As for its nutritional value, histidine is not considered an essential amino acid for adult men and adolescents, while it is for early childhood. It is also essential for most mammals.
Histidine is contained in relatively high proportions in hemoglobin. The imidazole group of histidine constitutes the active site of many enzymes: chemical modifications of specific histidine residues in fact cause their inactivation. The main pathway of histidine catabolism in mammals and humans passes through its transformation to glutamic acid, which begins with the degradation of histidine to urocanic acid by the action of the histidase enzyme.
The hereditary deficiency of histidinase (the enzyme that breaks down histidine) which can be transmitted as a recessive trait, leads to the accumulation in the circulation of histidine (histidinemia) with a picture of mental and statural retardation, anemia, poor skin pigmentation; it is also accompanied by an increased excretion of the amino acid in the urine (histidinuria). Elevated histidinuria can occur during pregnancy (histidinuria gravidarum) and in some conditions of functional liver failure.

Biosynthesis –
Histidine is an essential amino acid that is not synthesized in humans who must therefore introduce it through the diet or through supplements. The biosynthesis of histidine has been extensively studied in prokaryotes such as Escherichia coli. Like animals and microorganisms, plants also need histidine to grow and develop. Microorganisms and plants are similar to each other because they can synthesize histidine, both via the biochemical intermediate phosphoribosylpyrophosphate. In general, the biosynthesis of histidine is similar in plants and microorganisms.

Property –
Histidine is an essential amino acid which, as mentioned, enters the constitution of numerous proteins; it is obtained by hydrolysis of the proteins themselves or synthetically, and is used in medicine, in conjunction with urea, as a healing agent in the treatment of gastric and duodenal ulcers, sores, wounds, etc.