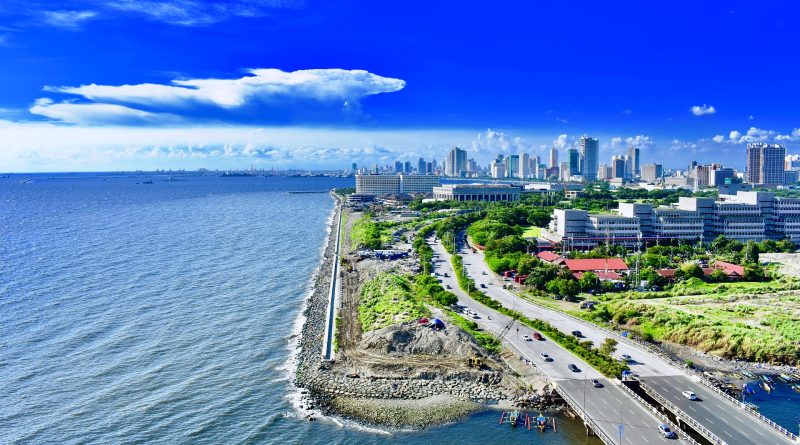 The Philippines is an island state in the form of a republic.
The population of the Philippines is 110,703,120 (2021) and the capital is Manila with a population of 1,652,171 (2010).
The Philippines is an island state located in Southeast Asia, in the Pacific Ocean; to the north it is separated from Taiwan by the Luzon Strait, to the west it is bathed by the South China Sea, to the southwest by the Sulu Sea towards Borneo, to the south by the Celebes Sea which separates it from the other islands of Indonesia and to the east by Philippine sea.
It is a geologically critical area due to its position near the Pacific Fire Belt which is frequently hit by earthquakes.
The Philippine archipelago comprises 7,641 islands spread across three main geographic regions: Luzon in the north, Visayas in the center, and Mindanao in the south.

Geography –
The Philippines is an archipelago of islands with a total area of ​​approximately 300,000 km2, including inland waters. Moreover, with their 36,289 km of coastline, the Philippines is the fifth country in the world for length of coastline. Borneo is located a few hundred kilometers to the southwest, while Taiwan lies exactly to the north of the archipelago.
Most of the islands have a mountainous morphology of volcanic origin, and covered by a dense tropical forest. The highest mountain is Mount Apo, with an elevation of 2,954 meters above sea level and located on the island of Mindanao. The Philippine Trench is the deepest point within national borders, and is the third deepest ocean trench in the world. The Rio Grande de Cagayan is the longest river, 505 km, and is located in the north of the island of Luzón. Manila Bay, where the city of Manila is located, is connected to Laguna de Bay, which is the largest lake in the Philippines, by the Rio Pasig. Located in the western outskirts of the fire belt, the Philippines show a very frequent seismicity and there are several active volcanoes, including Mayon, Pinatubo and Taal. The eruption of Pinatubo in 1991 produced the largest terrestrial eruption of the 20th century. 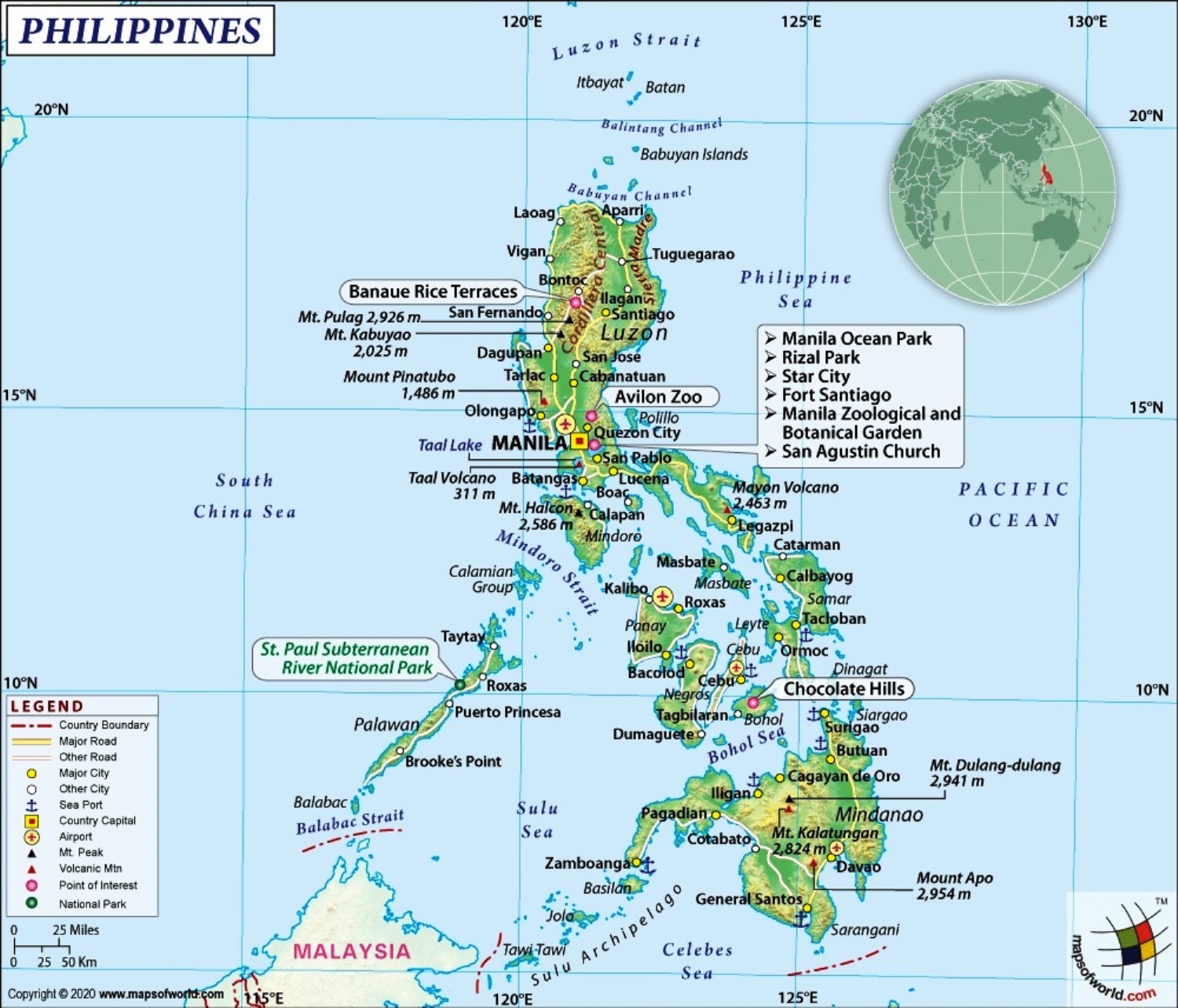 Climate –
The climate of the Philippines is tropical hot and humid. The average annual temperature is around 26.5 ° C. The year is divided into three seasons: Tag-init or Tag-Araw (the hot season or summer, from March to May), Tag-ulan (the rainy season, from June to November), and Tag-lamig (the cold season, from December to February).
There are two monsoon seasons, which are: one wet and the other dry. The monsoon that blows from the southwest (from May to October) is known by the name Habagat, while the one that blows from the northeast (from November to April) is known as Amihan. The coldest month is January, the hottest month is May. Both minimum and maximum temperatures peak in the months of April and May respectively. The capital Manila and most of the lowland areas are hot and dusty from March to May. Also in this period the average temperatures rarely exceed 37 ° C, while that of the sea rarely drops below 27 ° C. Average annual rainfall in the mountainous regions on the east coast can reach up to 5,000 mm, while in the more sheltered valleys less than 1 000 mm. The entire archipelago is often subject to passing hurricanes and typhoons from July to October.
Due to the particular climatic and geographical conditions, the Philippines are often hit by typhoons, some of which are very violent, such as typhoon Yolanda, which in 2013 caused the death of about 8 000 people.

Flora-
The Philippines represent a large vegetational heritage with about 13,500 plant species, 3 200 of which are not present anywhere else in the world. Particularly rich in biodiversity are the rainforests which have a unique flora, including rare types of orchids and rafflesias.
The rich vegetation is also due to the presence of the tropical climate but also to the fertility of the soils, many of volcanic origin.
Flowering plants are abundant and are used as ornaments, for the manufacture of perfumes and as food. Among these is the ylang-ylang (Cananga odorata), used in perfumery, and the so-called sampaguita or “jasmine of Arabia” (Jasminum sambac), declared the national flower of the Philippines by the presidential decree of 1934. , 54 species of bamboo, coconut palms, which are the basis of the economy of many cities, nypa (Nypa fruticans) and mabolo (Diospyros blancoi) trees, whose wood is used for construction, Canarium ovatum , durian and several species of carnivorous plants of the genus Nepenthes.

Fauna –
The particular morphology and vegetation of the Philippines hosts a numerous fauna; in fact, about 1,100 species of terrestrial vertebrates are registered, including over 200 species of mammals and over 600 species of birds. Endemic species include the Mindoro tamaru, the Visayas spotted deer, the Philippine tragedy, the Visayan wild boar, the Philippine flying lemur and several species of bats. The territory is devoid of large predators, with the exception of snakes, pythons, cobras and birds of prey such as the Philippine eagle. Other native animals include the common palm owl, dugong, and Philippine tarsier. Endemic to the archipelago is the Philippine crocodile, an endangered reptile: it is a seriously threatened species, and the residual colonies (a few hundred specimens, in the wild) are seriously threatened by the serious alterations to which the habitats are subjected. occupied by them.
The marine fauna is also very rich, also due to the presence of over 7,000 islands, which make this fauna one of the richest in the world; in the territorial waters there are over 3,000 different species of fish, 800 species of corals (out of about 6,000 species known worldwide) and even about 20,000 species of molluscs (out of about 110,000 species known worldwide), as well as marine mammals such as dolphins and whales and various species of turtles.