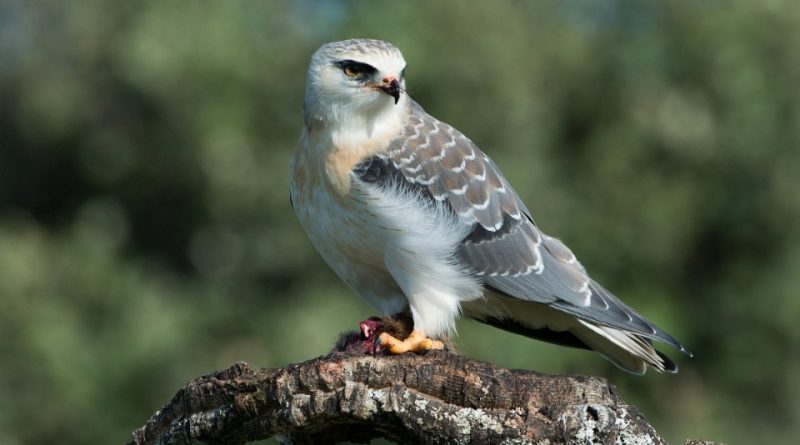 The black-winged kite (Elanus caeruleus Desfontaines, 1789) is a small bird of prey belonging to the Accipitridae family.

Geographic Distribution and Habitat –
The black-winged kite is a bird found above all in the open territories and in the semi-desert areas of sub-Saharan Africa and tropical Asia even if its range extends to Europe, Spain and Portugal and with sightings also in Italy. It seems that the range of the species is expanding more and more in southern Europe and, perhaps, in western Asia.
Some geographic populations of this species are recognized, as mentioned above, as subspecies and distributed in their respective territories.
Some scholars also recognize two further subspecies: E. c. wahgiensis, proper to New Guinea, and E. c. sumatranus, widespread on the homonymous island. The white-tailed kite and the Australian white kite were formerly included within this species, but today they are considered separate species.
Although its habitat is mainly that of the plains, it also extends to higher altitudes such as in Sikkim (at 3650 m), on the Nilgiri (in Doddabetta, at 2670 m) and in Nagaland (at 2020 m).
It is also a winter visitor in parts of its range, such as in the Western Ghats of India. 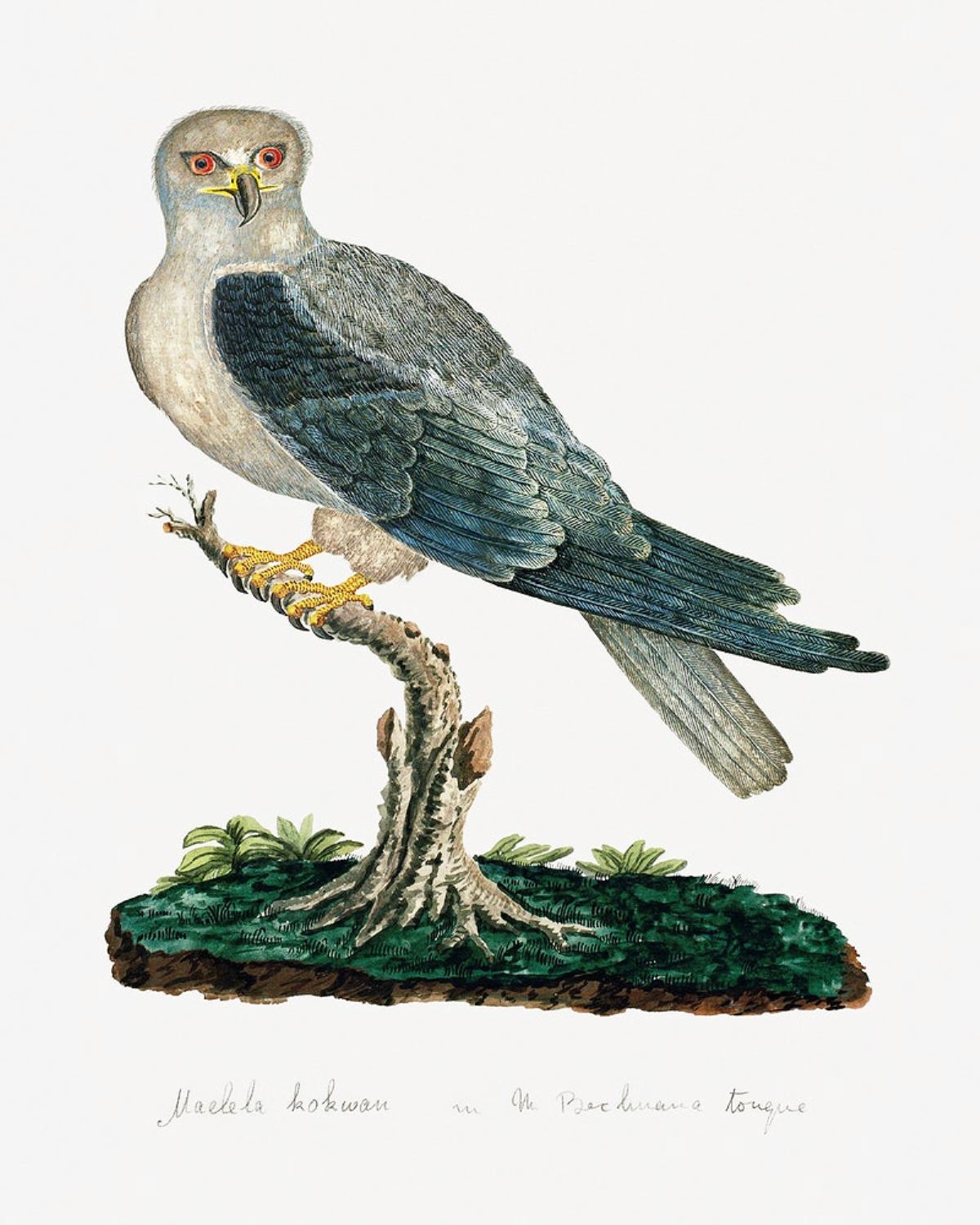 Description –
Elanus caeruleus is a smaller bird of prey with a maximum length of 30-35 cm and a wingspan of 80-88 cm and with a weight of 180-250 g with both sexes having similar plumage.
It has a large head, largely white in color, except for the vertex and nape which are a mid-toned gray and small black areas in front of the eyes that extend like lines above and behind them. The big eyes are facing forward.
The back, the large primary and upper secondary coverts and the upper caudal coverts are gray in color ranging from intermediate to dark shades (the male is on average lighter).
The upper face of the flight feathers is dark gray.
The undersides are uniformly white.
The underwing is composed of dark gray external primary and secondary, light gray internal secondary and white coverts.
The tail is short and white, except for the light gray central coxswain. The iris varies from red-orange to scarlet. The tail is clearly visible in flying specimens and, unlike that of real kites of the genus Milvus, it is not forked.
The long, hawk-like wings extend beyond the tail when the bird is perched.
When perched, such as on electric wires, it often holds its wings under its tail by moving it up and down as if to keep itself in balance.

Biology –
Elanus caeruleus is a bird of prey that reproduces at different times of the year depending on the range. However, even if in India it has been seen nesting all year round, it seems to never reproduce in April and May.
The mating phase is preceded by courtship which is noisy and involves chases, and, once the couple is formed, the two partners copulate frequently.
The nest, which is mainly built by the female, is made up of a coarse platform of twigs and placed on trees a few meters above the ground. The female lays 3 to 5 whitish eggs, spotted with yellow and reddish.
Both parents are dedicated to hatching but, once hatched, the male spends more time looking for food.
Initially it is the female who takes care of the feeding of the chicks, and sometimes she leaves the nest to go hunting in the vicinity of her, but she also receives the food that the male brings back to the nestlings.
After the flight, the young birds continue to depend on the food provided by the male for a period of about 80 days; at first the latter brings the preys back to the roost, but subsequently hands them to the young directly in flight.

Ecological Role –
The black-winged kite is a bird also known for its ability to hover in midair above open grasslands, just as smaller kestrels do.
It is a species that lives isolated or in pairs, but since the latter settle at a short distance from each other, it happens to see them circling in the air, together, with other couples.
It also has crepuscular habits.
Although it is seen more frequently on the plains, it is sometimes also possible to see it on the grassy slopes of the hills of the higher regions of Asia. It is not a migratory species, but it can make short trips in response to seasonal conditions.
Its diet is varied; among the prey captured there are grasshoppers, crickets and other large insects, lizards and rodents but also birds, small snakes and frogs.
On rare occasions it can also capture prey in flight.
Favorite perches are used as places to launch attacks on prey and for food, but sometimes larger prey can be eaten on the ground.
In southern Africa, it seems that it prefers the roadsides to feed on captured animals, so much so that sometimes specimens are killed in collisions with vehicles.
They are extremely silent birds and among the calls recorded there is a very high screech or a low whistle; however they get a little noisier especially during the breeding season.