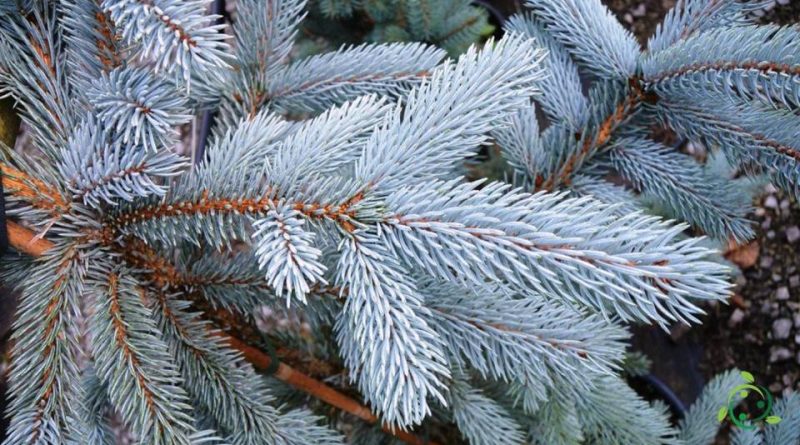 Reproduction of the Blue spruce

The Blue spruce (Picea pungens Engelm., 1879) is a plant of the Pinaceae family, native to the Rocky Mountains, in particular to south-eastern Idaho, Wyoming, Utah and Colorado, with isolated populations in Montana, Arizona and New Mexico.
This plant was imported to Europe in the mid-nineteenth century.

Suitable breeding habitat –
For the propagation of Picea pungens, it should be borne in mind that it is a subalpine species that grows at altitudes between 1800 and 3300 m, mainly along mountain streams or in the humid northern slopes, on normally little developed mountain or gravelly lithosols.
The optimal climate is therefore the continental one, with long, cold and snowy winters, and short but relatively hot summers; annual rainfall varies between 600 and 900 mm. in these areas it grows in small pure and scattered formations, or mixed with Pseudotsuga menziesii var. glauca, Pinus contorta and Populus tremuloides.

Propagation –
The Blue spruce is a slow growing conifer used in many landscapes.
This plant can be propagated in various ways.
In stem cuttings propagation, although successful rooting of stem cuttings is not common, it is known to be possible. Success increases with the cutting of vigorous containerized trees. Vegetable twigs collected early in the morning give the best results because the wood is more swollen. An IBA treatment between 0.3% and 1.0% is also beneficial. Using lateral stems for cuttings will produce an undesirable, prostrate plant, so erect stems are recommended.
As for the substrate to root on, research shows that a sand and peat mixture medium is best.
It can also propagate by grafting.
Picea pungens is usually grafted onto a dormant Picea abies rootstock during the winter months. It is useful to immerse the graft bases in IBA at 200 ppm for three minutes before grafting. Layering has also been practiced successfully.
Picea pungens can also be vegetatively micropropagated by somatic embryogenesis. Somatic embryogenesis restores the juvenile phase of a plant’s life cycle. With somatic embryogenesis, rejuvenation can be restored from the mature parts of the plant.
Regarding the propagation by seed, please note that the production of seeds for this plant begins at about 20 years of age. A normal tree will only produce a full crop of cones every two to three years. The seed begins to fall from the cones around September. Natural reproduction of Picea pungens is not common, probably because the light seed does not come into contact with the soil. However, the seeds germinate on a variety of substrates.
Picea pungens was once thought to have embryonic dormancy, but research has now found that this is not the case. The seedlings grow continuously when exposed to more than 16 hours of light per day. Seedlings go into dormancy when they receive less than 12 hours of light per day. Dormancy can be prevented with a 12 hour daylight period with a two hour break during the night with red or white light. Seedling growth is very slow, with a height of between 15 and 23 inches during the first five years.

Ecology –
The Blue spruce is a plant that, in its areas of origin, is most commonly found along streams in mountain valleys, where soil moisture levels are higher than the low rainfall in the area would suggest. The large coniferous forests in the western United States are home to most of the wild formations, although it is possible to see populations almost everywhere in that area. The Colorado Rockies are a great place to find a spruce. Most often found in the wild in Utah and Colorado, it occasionally makes appearances in New Mexico and Wyoming.
Indigenous spruce tends to live at higher altitudes of 1,750-3,000m, but non-indigenous spruce can grow in any type of landscape due to their adaptability.
Spruce, despite its limited area of ​​origin, is capable of growing in a wide variety of conditions and is considered highly desirable as a landscape plant due to the unusual blue-gray color of its foliage.
In coniferous forests that cover large areas but have few plant and animal species live some animals such as the capercaillie and many species of insects and worms, which reside in trees and in the ground. Other birds can nest in these trees and contribute to the biome and ecosystem.
The Blue spruce plays a crucial role in this habitat. The ecological niche of Picea pungens that grows in coniferous forests of mountain valleys includes the absorption of light, water and nutrients (for photosynthesis), shelter for birds, small game and insects and food for organisms such as squirrels and partridges , as well as release oxygen.