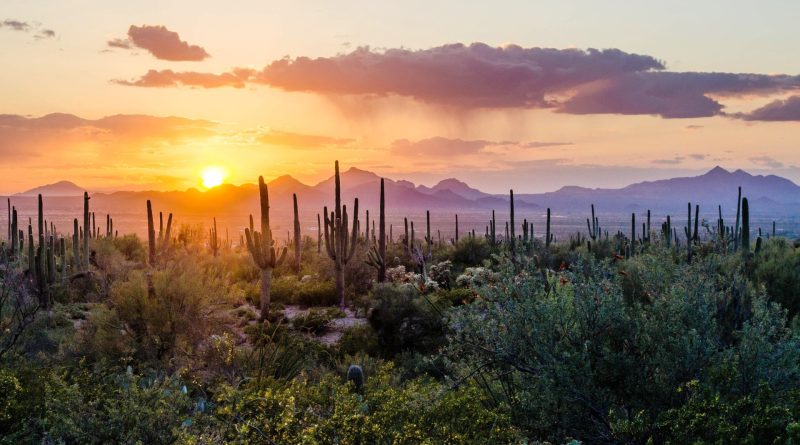 The Saguaro National Park, whose WDPA code is: 374162 is a United States National Park located in Arizona, with a land area of ​​370 km².
This park was established in 1994 and is managed by the National Park Service.
Saguaro National Park is located in southern Arizona and is divided into two sections, one about 20 miles east and the other about 15 miles west of Tucson. Both sections are easily accessible by car and have a visitor reception center.
Saguaro National Park is part of the Sonoran Desert and is named after saguaro, a giant cactus native to this region, although other cactus species are also present.
The area was originally designated as a National Monument on March 1, 1933, and was transformed into a National Park on October 14, 1994 by President Bill Clinton.

Geography –
The Saguaro National Park, as mentioned, is divided into two sections.
The West Section: Tucson Mountains District and the East Section: Rincon Mountains District.
The Tucson Mountains District is located west of the city of Tucson. The Red Hills visitor center (2700 North Kinney Road, Tucson, Arizona 85743) is open from 9am to 5pm every day except December 25th, here you can find brochures, books and maps of the park. Following the road that enters the park from the visitor center for about 2.5 km, you reach the Bayada loop drive, a steep dirt road that makes a loop of almost 10 km through a dense saguaro forest. In this section of the park there are some very simple and short-lasting paths, such as the cactus garden trail at the visitor center, the desert discovery nature trail just under 1 km long, the valley view overlook trail of about 1.5 km which allows panoramic views of the desert, mountains and saguaro forest.
The Rincon Mountains District is located east of the city of Tucson and was the original National Monument. The peculiarity of this park is that it starts from the Sonoran Desert and gradually becomes part of the coniferous forest of the Rincon Mountains. The highest peak in this area is Mica Mountain which reaches an altitude of 2641m. Although this section has fewer saguaro cacti than the western area, they are on average larger in size due to the more frequent and abundant rainfall due to the proximity of Rincon mountain.

Geology –
The Saguaro National Park has a very ancient geological origin. The oldest rocks are metamorphic in nature, dark gray in color known as Pinal schist, representing the original crust of southern Arizona. These rocks were formed about 1.7 billion years ago during the Precambrian due to the collision between plates that altered the pre-existing sedimentary volcanic rocks into schists and other metamorphic rocks. There are also some grants formed 1.4 billion years ago and which make up the crest of the Tarque Verde.
Subsequently, about 600 million years ago, at the beginning of the Paleozoic, crustal movements related to the collision between the Pacific plate and the North American plate began, this led to a succession of periods of deposition of sedimentary rocks, mainly limestone, sandstone and shale and erosion periods. Specimens of these rocks can be seen inside the park, in the Sus picnic area and near the Lime Kiln waterfalls.
During the first part of the Mesozoic, about 150 million years ago, the continuous rise of the region led to a strong erosion of the rocks that gradually reached the surface. The sediments were dragged up to an inland sea and today form the Red Hills near the homonymous visitor center. The red color is due to hematite, an iron oxide that forms in shallow oxygen-rich waters such as the sea that covered this region. Evidence of the existence of this sea comes from petrified fossil wood, shells and dinosaur bones found in the area.
Between the end of the Mesozoic and the beginning of the Cenozoic, about 30 million years ago, the continuous subduction of the Pacific plate under the North American plate led to a strong volcanic activity involving the present Tucson area, as a consequence of this. there were strong emissions of rhyolite, lava and pyroclastic flows. The consequent emptying of the subsoil led to the formation of a huge caldera which gradually filled up with rhyolite, ashes and rocks formed during the collapse of the volcano. This rock complex is known as Tucson Mountain Chaos and is the main rock formation in the Tucson Mountains. In the same period the surrounding areas were subjected to introsions of pink granite and quartz veins that contain many minerals, including copper, silver and gold, the presence of these minerals allowed the development of Arizona in the late nineteenth century. One of these intrusions is visible along the Hugh Norris trail, at the height of Amole Peak.
Finally between 10 and 20 million years ago the continuous movement of the tectonic plates led to the formation of a fault in the Tucson area, the movements along this fault led to the formation of a depression that was filled with sediments from the Tucson Mountains and the Catalina mountains, this process is continuing to this day.

Climate –
The Saguaro National Park is located in a region characterized by an arid climate of type BWh according to the Köppen-Geiger classification.
In this area, in the winter period, the temperature can go from around 19 ° C during peak hours to 5 ° C at night, summer is extremely hot with maximum temperatures that can exceed 41 ° C while in the evening the temperature drops to about 22 ° C.
The area is characterized by a very arid climate with average annual rainfall of just over 300 mm, the most abundant rainfall occurs in the months of July and August, while it is extremely scarce between April and June. In winter, rainfall is concentrated in the months from December to February and occurs in the form of light but prolonged rains, snowfalls are also possible at higher altitudes, the summer rainy season is instead from July to September and is characterized by intense rainfall. and violent typical of the North American monsoon, accompanied by lightning and sudden floods followed. 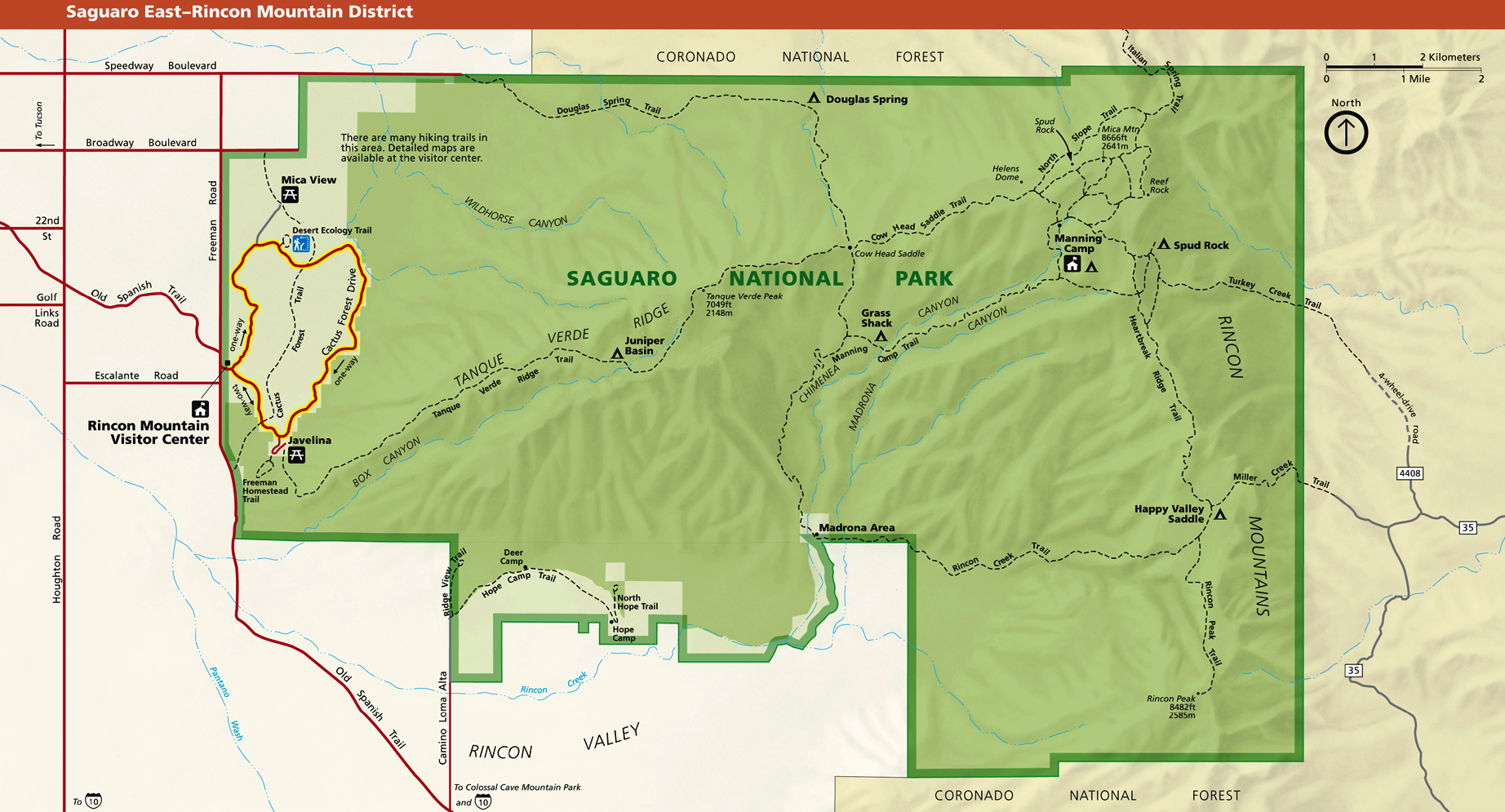 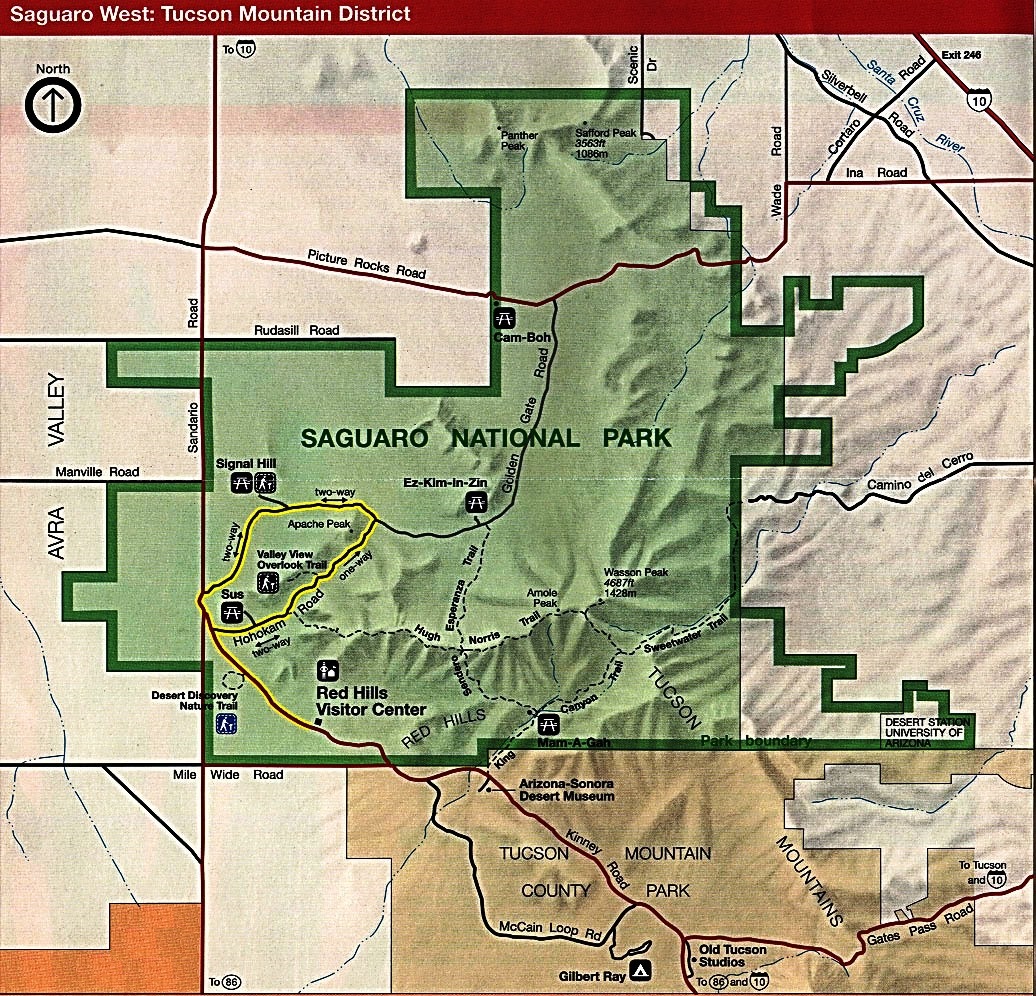 Flora –
The Saguaro National Park, due to its climatic peculiarities, hosts, for the most part, plants that have adapted to living in the desert, so in the driest periods they reduce their activity to preserve the accumulated water. There are over 1162 plant species in the Rincon Mountains district, ranging from cacti and ocotillo in the desert area to yellow pine (Pinus ponderosa) and pseudotsuga in the mountainous area. The Tucson Muntains district contains 512 species of plants.
Within the park there are 10 species of plants in danger of extinction, 78 species of plants not native to the region have spread within the Rincon Mountains district, while 47 species of plants not native to the area have spread to the interior of the Tucson Mountains district. There are 25 species of cacti in the park, including the saguaro (Carnegiea gigantea), various species belonging to the genus Mammillaria, Ferocactus wislizeni, Opuntia versicolor, Echinocereus fendleri var. fasciculatus, the Opuntia engelmannii, the teddy bear cholla (Cylindropuntia bigelovii), the Cylindropuntia fulgida.
Also within the park there are many species not native to the region, the most dangerous for the life of the saguari is the Pennisetum ciliare, a perennial plant native to Africa able to compete for the same resources that the saguaros eat and which creates a turf that does not allow the growth of other species and which facilitates the spread of fires. Every 10 years there is a census of saguaros in the park, the last one was from October 2009 to October 2010, the results have not been completely analyzed even if it is evident that the number of specimens is constantly increasing in both districts. since 1990.