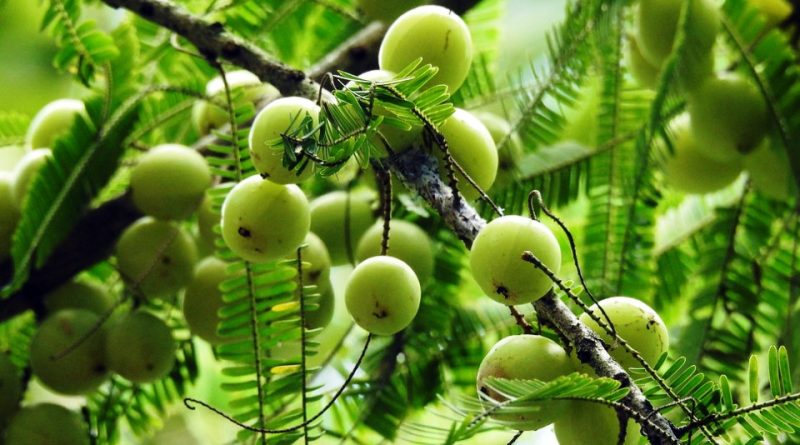 Etymology –
The term Phyllanthus comes from the Greek φύλλον phýllon leaf and from ἄνϑοϛ ánthos fiore: for the flowers that appear at the base of the leaves.
The specific emblica epithet derives from amblaki, the vernacular name of this shrub in the Moluccas; the name is roughly the same in Arabic (êmlidj) and Sanskrit (amalaki).

Geographic Distribution and Habitat –
Phyllanthus emblica is a plant native to an area that includes East Asia, China, the Indian subcontinent, Myanmar, Thailand, Cambodia, Laos, Vietnam, Malaysia and Indonesia.
Its natural habitat is that of mixed forests, drier in areas with sparse woods or shrubs, thickets at altitudes between 200 and 2,300 meters in southern China. 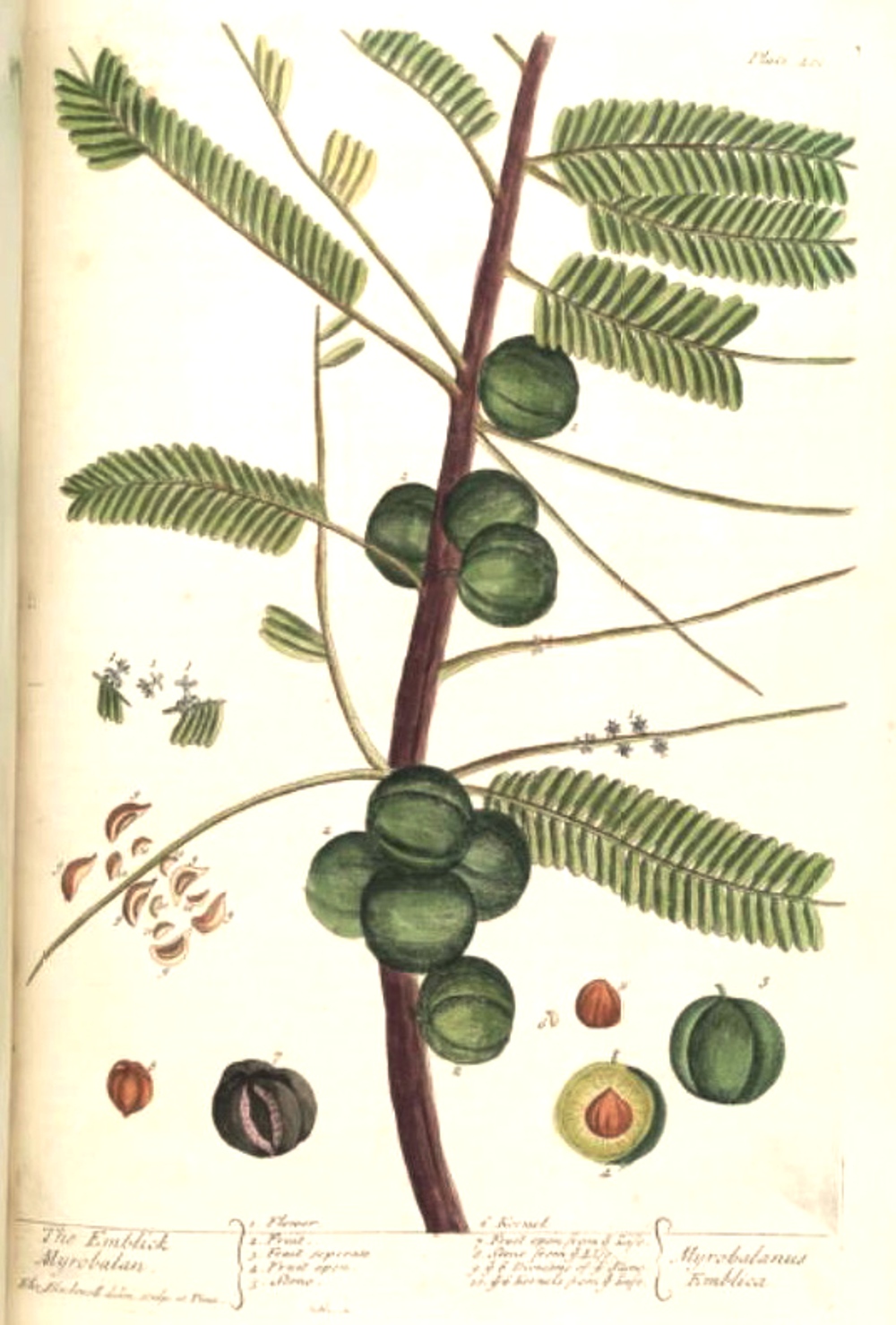 Description –
Phyllanthus emblica is a small to medium sized tree, which can reach about 1-8 m in height and which is partially deciduous.
The twigs are not hairless or finely pubescent, 10-20 cm long, generally deciduous.
The leaves are simple, subsessile and densely arranged along twigs, light green in color, similar to pinnate leaves.
The flowers are greenish-yellow.
The fruit is almost spherical, of a light greenish yellow color, quite smooth and hard, with six vertical streaks or furrows, which ripens in autumn; it has a yellow color and a diameter of up to 25 mm. The fruits of wild plants weigh about 5.5 g, the fruits grown on average 28 – 50.

Cultivation –
Phyllanthus emblica General information
It is a plant commonly grown in home gardens, especially in India, for its edible fruit and as a medicinal plant and its fruits are often found in local markets.
The plant is also grown as an ornamental species and is planted as a pioneer species in reforestation projects in Thailand.
It is a plant to be cultivated, in the areas of origin, mainly in the warm and tropical plains, succeeding in both humid and semi-arid areas.
It can also be found at altitudes of up to 2,300 meters in southern China. It grows best in areas where annual daytime temperatures are between 20 and 29 ° C, but can tolerate 14 – 35 ° C.
It prefers an average annual rainfall in the range of 1,500 – 2,500 mm, but tolerates 700 – 4,200 mm.
In general it is a very easy plant to grow, which is said to thrive in regions that are too dry and on soils that are too poor for most other fruit crops.
It requires a location in full sun or partial shade, but is not demanding regarding soil requirements as long as it is well drained.
It also grows well on alkaline soils, although nutritional deficiencies occur in a highly alkaline soil (pH 8.0).
For optimal productivity, the tree requires deep soil that ranges from sandy to loamy, light to heavy, and slightly acidic to slightly alkaline, with a pH in the range of 6 – 8, tolerating 5 – 8.
Plants appear to grow equally well in both arid and humid conditions.
The tree has a rather slow growth and usually only bears fruit between the ages of 6 and 8.
The plant produces flowers for between 12 and 13.5 hours.
Annual fruit yields can be around 15 – 25 pounds per tree. The fruits ripen in autumn and the berries are picked by hand after having climbed the upper branches that bear the fruit; they have a sour, bitter and astringent taste, and are quite fibrous.
Fully mature plants can produce 200 kilos of fruit per year.
The tree can be governed by coppice and coppice shoots grow particularly vigorous and coppice is considered the most suitable system for the production and harvesting of fruit on a commercial scale.
Plantations usually need a lot of weeding because the thin foliage does not form a closed canopy.
A special feature of this plant is that it is resistant to fire and is one of the first trees to recover after a fire.
Plants are generally monoecious, but occasional dioecious forms are found.
Propagation occurs by seed that does not keep well and therefore it is better to sow as soon as it is ripe.
The seed is taken from overripe fruits, which are dried in the sun to facilitate the removal of the pit, or are cut in half right through the pit. The extracted seeds are subjected to the buoyancy test and 100% of those that sink will germinate. In 4 months, the seedlings will have a stem diameter of 8 mm and can be planted or grafted with some cultivars present, if necessary.
Propagation can take place by semi-woody cuttings, collected from the intermediate portions of vigorous young tree shoots and planted in flower beds at a temperature of about 33 ° C; these have a high rooting percentage, up to 84%.
Green wood cuttings can be prepared.

Preparation Method –
Ripe fruits of Phyllanthus emblica can be stored for several months on the tree without significant loss of quality. For this reason, a long period is available for harvesting the fruit for consumption.
The fruits are eaten raw or cooked in various dishes, such as amle ka murabbah, a sweet dish made by dipping the berries in sugar syrup until candied.
Fruits are often preserved by splitting, removing the stone, putting the cloves in a solution of 42% glycerol, 42% sucrose, water and preservatives, then heating at 90 ° C for 3 minutes. The fruits are left to equilibrate in the solution for two days at 2 ° C, then drained and packaged in containers. Fruits preserved in this way remain acceptable for about 2 months at room temperature, and much longer if cooled, but the ascorbic acid content slowly decreases.
They can also be preserved in vinegar.
In the Batak area of ​​Sumatra, Indonesia, the inner bark is used to impart an astringent and bitter flavor to the broth of a traditional fish soup known as holat.
In traditional Indian medicine, dried and fresh fruits of the plant are used. All parts of the plant are used in various herbal preparations of Ayurvedic medicine, including the fruit, seed, leaves, root, bark and flowers.
According to Ayurveda, the fruit of is sour (amla) and astringent (kashaya) in taste (rasa), with secondary tastes sweet (madhura), bitter (tikta) and spicy (katu) (anurasas). Its qualities (guna) are light (laghu) and dry (ruksha), the post-digestive effect (vipaka) is sweet (madhura) and its energy (virya) is refreshing (shita).
In Ayurvedic polyherbal formulations, the fruit is a common constituent and, in particular, is the main ingredient in an ancient herbal rasayana called Chyawanprash.
Among other uses, as mentioned, it is commonly used in inks, shampoos and hair oils, the high tannin content of the fruit acts as a mordant to fix the dyes in the fabrics.