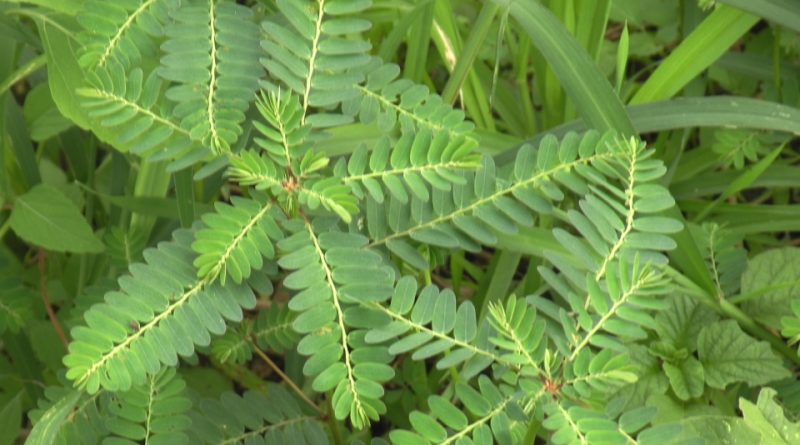 Gale of the wind (Phyllanthus amarus Schumach. & Thonn.) Is a herbaceous species belonging to the Euphorbiaceae family.

Etymology –
The term Phyllanthus comes from the Greek φύλλον phýllon leaf and from ἄνϑοϛ ánthos fiore: for the flowers that appear at the base of the leaves.
The specific epithet amarus refers to the bitter, acrid taste.

Geographic Distribution and Habitat –
Phyllanthus amarus is a plant of indeterminate origin but certainly from tropical America and grows in an area that includes South America; it is present throughout South America, in the Caribbean, from Trinidad to the Bahamas, in Central America, from Panama to Mexico and in the South East of North America and Florida.
The plant is present outside its area of ​​origin in some tropical and subtropical areas, such as in India, where it is also cultivated.
Its habitat is that of open field areas, uncultivated land, areas with grassy vegetation and dry deciduous forest, generally on humid and sandy soils, at altitudes from sea level up to 1,000 meters.
It can become, under certain conditions, a weed. 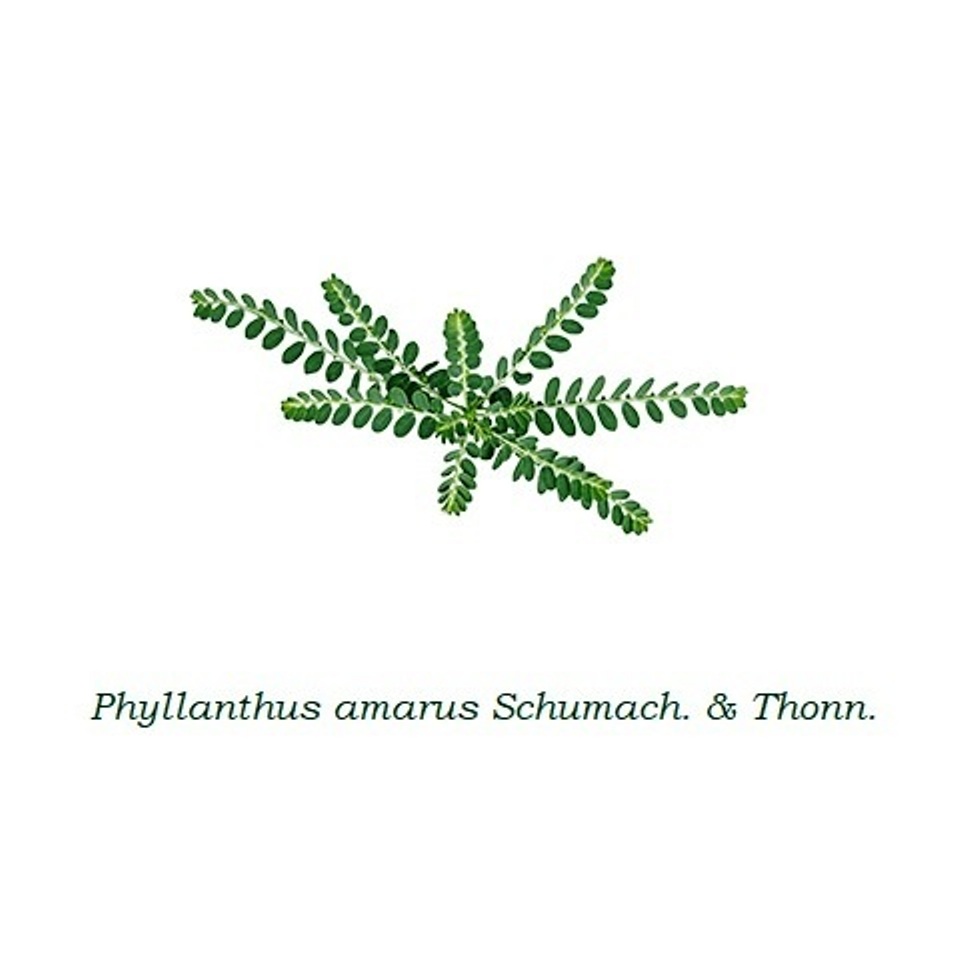 Description –
Phyllanthus amarus is an annual herb 60 to 75 cm tall, rather hairless.
It has a robust and woody and winding root.
and the stems are often branched at the base and angular.
The leaves are numerous, subsessile, distichous, stipulated and paripinnate with leaflets.
The flaps are oblong, with dark nerve and rounded base.
The flowers are very small, pedunculated, numerous, axillary and yellowish in color.
The sepals are 5-6, ovate-oblong external acute, leathery with clear margins; disc in both sexes of the glands; male flowers 1-3 pedicellates; the female flowers are solitary, larger and more erect.
The stamens are 3, sessile on a short column, minute and very short styles.
The fruit is capsule, minute, globose and dehiscent.
The seeds have evident parallel and transverse ribs.

Cultivation –
Phyllanthus amarus is a plant that grows in tropical and subtropical climates, preferably on well-drained sandy soil where it reaches its maximum lush growth.
This plant is commonly harvested in nature for local medicinal use.
It is also cultivated for medicinal use in some areas, in particular in India, where it is marketed; also there are no cultivars.
For its cultivation it requires a sunny position, a sandy substrate, on black soils with an optimal pH of 7.5 – 8.
The plant is equipped with explosive capsules that push the seeds at a certain distance from it.
Under certain conditions, as mentioned, it can become a pest and can create problems for crops of: legumes, soybeans, peanuts, cereals, sugar cane, cassava, taro, sesame, sunflower and cotton.
Propagation occurs by seed and requires light to germinate.
The seed is sown directly in the open field, usually mixed with sand.
Germination is often less than 50%; the germination of freshly harvested seeds is slower than that of older seeds.
The seeds dried at 8% humidity and treated with turmeric rhizome powder, under normal environmental conditions, maintained their vitality for up to 6 months; untreated seeds are poorly stored.

Customs and Traditions –
Until about 1980, taxonomists placed a number of species, including Phyllanthus amarus, under Phyllanthus niruri L ..
Where the name Phyllanthus niruri has been applied in the previous literature to African or Asian specimens, it is usually meant Phyllanthus amarus, but sometimes also Phyllanthus debilis, Phyllanthus fraternus, Phyllanthus maderaspatensis or Phyllanthus rotundifolius.
True Phyllanthus niruri specimens have never been confirmed outside the Americas. The confusion between Phyllanthus fraternus and Phyllanthus amarus still persists in the pharmacological literature.
As for its uses, Phyllanthus amarus is widely used as a medicinal plant and is considered a good tonic, diuretic and febrifuge.
There has been considerable research into the medicinal properties of the plant, largely in support of traditional uses.
The following chemical constituents have been isolated from the plant: lignans (such as fillanthin, hypophylline, filtetralin, nirtetralin, niranthin), ellagitannins (fillanthusiin D, amariinic acid, elaeocarpusin, repandusinic acid A and geraniinic acid B), flavonoids, alkalodynides, tannins, tannins phenolics and a chroman derivative.
The phyllantine alkaloid should not be confused with the phyllantine lignan.
The leaves have been found to contain the highest amounts of phyllantin (0.7%) compared to the whole plant: phyllanthin (0.4%), hypophylline (1.2%), gallic acid (0.4%) and ellagic acid (0.2%).
Phylline and hypophylline have protective activity against cytotoxicity. However, phylline has also been reported to be toxic to the nervous system and liver.
The aqueous extracts show potent anticarcinogenic activity against the development of different types of cancer.
Fresh plant material and a methanol extract showed strong antioxidant activity in various antioxidant assays. Drying of the plant material caused a significant reduction in antioxidant properties. On the other hand, boiling water extracts showed significantly stronger antioxidant potentials even from dried plant material due to the increased solubility of the compounds, the breakdown of cellular constituents, and the hydrolysis of tannins.
An extract of the whole plant showed significant radioprotective activity, decreasing damage to intestinal cells, decreasing the levels of lipid peroxidation, decreasing the percentage of chromosomal aberrations and increasing antioxidant enzymes in the intestine, blood and liver.
Various tests have shown significant anti-inflammatory potential.
The methanolic extracts of leaves, roots and fruits showed significant antibacterial activity in vitro against a number of gram-positive and gram-negative bacteria; leaf extracts showed the highest activity.
A chloroform fraction of the aerial parts showed a significant inhibitory effect against the dermatophytic fungus Microsporum gypseum and against the yeast Candida albicans.
The chloroform and ethanolic extracts of the aerial parts and roots showed significant larvicidal activity against Anopheles stephensi larvae. An ethanolic root extract possessed significant activity against Tribolium castaneum, a stored grain pest.
Norsecurinin, isolated from the aerial parts, showed significant activity against spore germination of fungi of Alternaria brassicae, Alternaria solani, Curvularia pennisetti, Erysiphe pisi and Helminthosporium frumentacei crops in greenhouse crops.
Fresh leaves have been found to contain high levels of Manganese (465ppm), Copper (21.8ppm), Zinc (75.1ppm). Levels of several toxic compounds are high enough to pose a threat to the animals that consume them, and the use of the leaves for medicinal purposes should also be monitored.
Among other uses, Phyllanthus amarus Phyllanthus amarus could have an agroforestry use as it seems that the roots of the plant have aggregating properties in sandy soils.

Preparation Method –
Phyllanthus amarus is a plant that has long been adopted for various uses in traditional medicine of natural growing areas.
The parts used are the aerial ones.
From the whole plant a decoction is obtained which, combined with honey, is used as a cough medicine.
An infusion is used as a remedy for dysentery and as a blood purifier (bitter tonic) to reduce blood sugar levels.
The plant is also used in case of difficult childbirth, for edema and to counteract rib pain, fever and sore throat. A decoction of the whole plant is taken as a remedy for blennorrhea, oliguria and venereal diseases.
The plant is reduced to a paste and prepared as a vaginal suppository to induce menstruation. This paste is also given via enema to infants as an antidote to poison.
The aerial parts of the plant are used to prepare a bitter infusion as a cholagogue, diuretic, febrifuge and stomachic; was used as a substitute for quinine. It is also used by mothers after childbirth to relieve aching uterus and treat colic.
An infusion is prepared from the leaves which is used as a cure for hemorrhoids, alone or in combination with the lime juice and powdered fruits of Xylopia aethiopica.
The lymph is taken on tap as a remedy for rib pain, tachycardia, blennorrhea and female infertility, for instillation in the ear for otitis and for topical application to mature boils and abscesses.
An infusion is also prepared from the leaves to relieve stomach pains.
Ripe fruit and seeds are considered deworming.
The leaves, rubbed between the hands, foam.