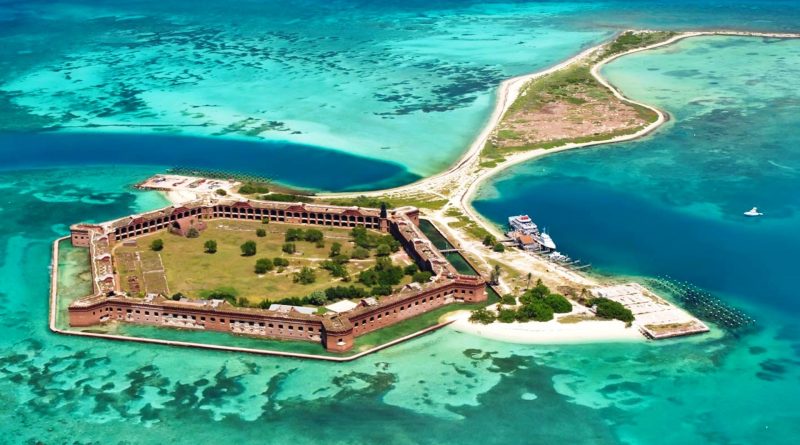 Dry Tortugas National Park, the WDPA code is: 61706, is a US national park located in southern Florida, west of the city of Key West.
The park preserves Fort Jefferson and the seven islands of Dry Tortugas, the westernmost ones of the Florida Keys.
This park has a land area of ​​248.80 km²; was established on January 4, 1935 and is operated by the National Park Service.
The Dry Tortugas Archipelago is classified as a subtropical-tropical border ecosystem, home to species that do not normally reproduce and are not commonly found anywhere else in the continental United States or on the islands and waters surrounding it.

Geography –
The Dry Tortugas are a small archipelago of coral islands about 110km west of Key West, Florida. They represent the westernmost extension of the Florida Keys, although several coral reefs and underwater shoals continue west out of the park past the Tortugas. The park area is made up of over 99 percent water. The seven major islands, all within the park, are roughly west to east, Loggerhead Key, Garden Key, Bush Key, Long Key, Hospital Key, Middle Key, and East Key.
Dry Tortugas National Park is bordered to the east, south and west by the Florida Keys National Marine Sanctuary and to the northwest by the Tortugas Ecological Reserve.
The northern and western parts of the park, including the central island group, were designated for a 120 km2 natural research area on January 19, 2007; no marine life can be captured here, nor can ships anchor. Vessels wishing to moor in the natural search area must use designated mooring buoys or docks. About 54% of the park remains open for fishing.
The formations are low and irregular. Some have thin growths of mangroves and various other plants, while others have only small patches of grass or are devoid of plant life. In general, they arise sharply from relatively deep water. They constantly change size and shape. Tortugas Atoll has had up to 11 islets over the past two centuries. Some of the smaller islands have disappeared and reappeared multiple times due to the impact of the hurricane. The total area of ​​the islets, some of which are little more than sand banks just above the water level, is about 58 hectares. Their area changes over time as the wind and waves reshape them.

Geology –
The Dry Tortugas are the western extension of an arched chain of Pleistocene cliffs and Oolithic limestone islands, with the eastern limit near Miami. These Florida Keys are the surface expression of the 6.0km-thick South Florida carbonate shelf, which has accumulated sediment since the Early Cretaceous. On the surface, two stratigraphic units are exhibited, the Key Largo Limestone and the Miami Limestone. The Key Largo Limestone are reefs up to 61m thick, parallel to the edge of the shelf, made up of hermatopic corals and limestone. Miami Limestone is less than 15m thick and generally lies behind the Key Largo Limestone reef, but towers above it in the western extension of the Keys. It consists of a Bryozoic facies and an Oolithic facies and represents a subtidal bank. Additionally, excellent examples of Holocene carbonate sand deposits are found in the Dry Tortugas, consisting mainly of disjointed Halimeda plates. Between the Dry Tortugas and Key West there is an example of these 12m thick sand deposits, known as “quicksand”.

Climate –
Dry Tortugas National Park is characterized by a tropical savannah (Aw) climate, with a rainy season that coincides with the Atlantic hurricane season from May to October and a dry season that runs from November to April. Despite occasional exposure to tropical systems, Dry Tortugas is the driest place in Florida with an annual rainfall of approximately 97cm. There is no large jungle or forest area on the islands, and the sandy soil (which drains quickly) and intense sun aggravate the drought conditions often found on the islands. Seasonally there is little temperature variation, with high temperatures in summer around 33 ° C and low temperatures in winter around 18 ° C. 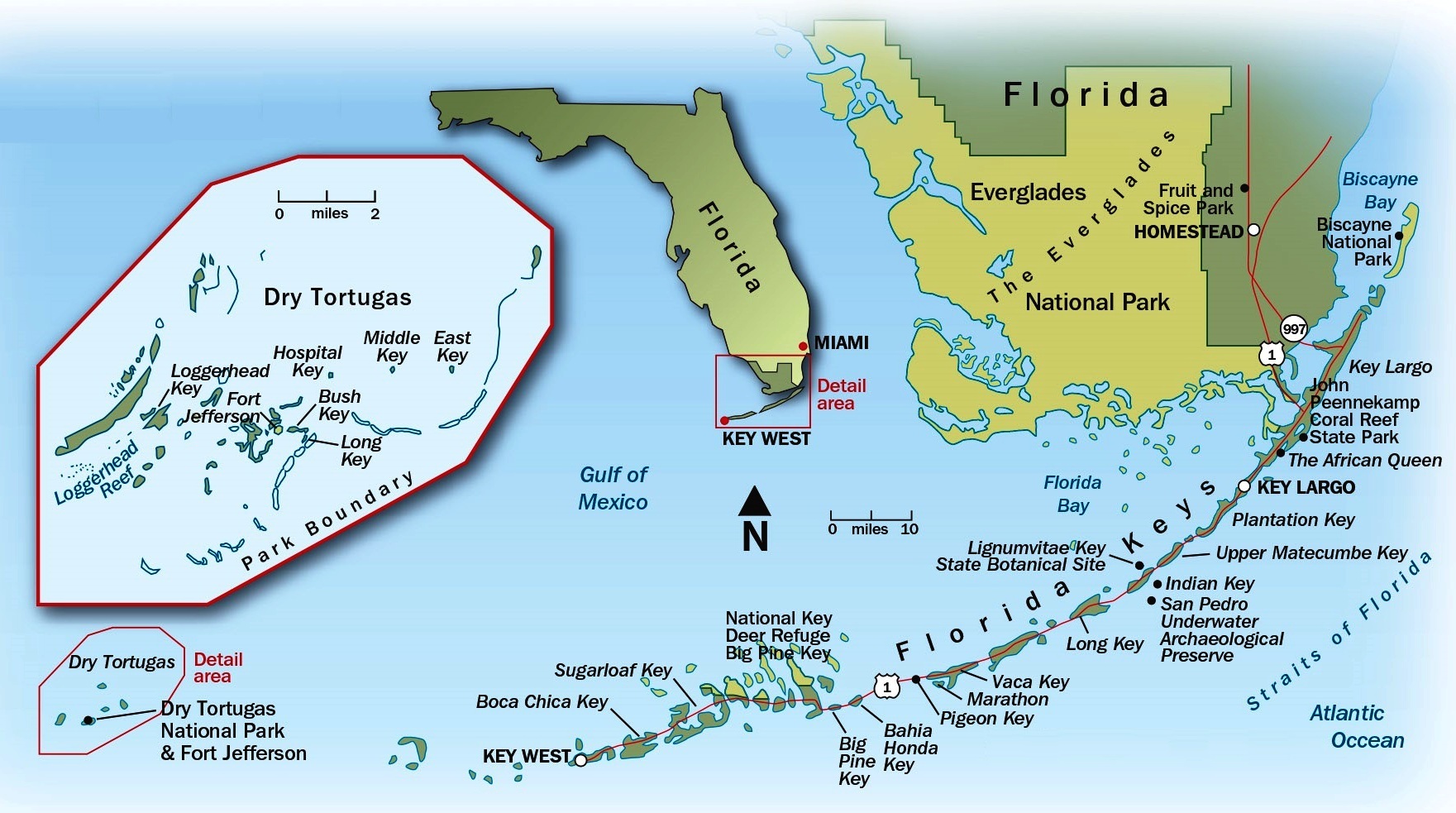 Flora –
The variety of vegetation that flourishes in Dry Tortugas National Park is influenced by the zone’s unique combination of subtropical climate, extreme weather events, harsh maritime environment (sun, sand and salt) and history. Both native and non-native plant species compete for the same basic resources: space, sunlight, water and nutrients. Tides, currents, and migrating wildlife are sources of seeds from distant lands, and humans have cultivated an assortment of plants throughout history. Of the 125 plant species reported in the Dry Tortugas National Park, 81 species (65% of the total) are of exotic origin; the result of an accidental and deliberate introduction by man in the last century. The smaller islands are made up mostly of native species, while the larger islands (Garden and Loggerhead Keys), with their long history of human settlement and disturbance, have a substantially greater abundance of exotic species.
The park’s rich cultural heritage is reflected in the wide variety of cultivated plant species that have fallen for and out of favor over time by past residents. Vegetation in national parks is generally managed to allow for the natural presence of native plant species. Although invasions of non-native plants are controlled by park managers within time and budget constraints, some non-native, but non-invasive, historically valuable species may remain.
A Fort Jefferson tour immerses visitors in the greenery of Garden Key, on which the fort is built. But the history of Garden Key is only a small part of the history of the park’s greenery. Visitors to Loggerhead Key get a close look at the positive results of a recent vegetation management program to remove invasive exotic vegetation that was interfering with the island’s ecology. And don’t be fooled into thinking that vegetation only grows on islands, above the surface of the water. The vast majority of the park’s 262 square kilometers is submerged by the sea surface. Accessible by snorkeling and diving, marine plants such as seagrasses make up the majority of the vegetation found in Dry Tortugas National Park.

Fauna –
Dry Tortugas National Park is home to many historical and natural wonders above and below the water’s surface. Buzzing with life, this area has long been a source of inspiration for visitors, researchers and adventurers.
The park’s coral reef and kelp communities are some of the liveliest in the Florida Keys and provide habitat for a myriad of marine life species. The sooty tern finds its only regular nesting site in the entire United States at Bush Key, adjacent to Fort Jefferson. Large sea turtles climb the park’s protected beaches to bury their broods of eggs. Patient visitors who are willing to get wet and snorkel will see many species of reef fish and other marine life beneath the water’s surface.
Dry Tortugas National Park is home to around 30 coral species, including elkhorn and staghorn, both of which are listed as federally threatened under the Endangered Species Act.
Additionally, Dry Tortugas National Park is famous for the abundance of sea turtles that nest in the area every year.
The colorful reef fish that attract snorkelers and divers in Dry Tortugas National Park are as vivid as the coral reefs they live in. A seemingly endless variety of fish species whizzes in and out between the nooks and crannies of coral reefs, their shapes camouflaged by the shadowy interplay of light and dark. Predators are easily confused by the cryptic color flashes that disappear as quickly as they appear, or change direction in the middle of the stream with seemingly no warning and for no apparent reason. To complicate the hunt, many species of fish have markings that make it difficult to tell whether they are swimming forwards or backwards.
Although coral reefs occupy only a small fraction of the marine environment, they serve as habitats for approximately 25% of all marine fish species. Competition for food and space is fierce in such a crowded environment, and the fish have adapted by developing ingenious survival tactics. Open water fish are characterized by speed on the open sea, with an aerodynamic torpedo shape that minimizes friction when swimming in the water. Reef fish, on the other hand, live within the confinement of coral reefs, where maneuverability is a greater advantage than speed. For example, angelfish have a characteristic flat shape that optimizes their ability to whiz and change direction. Some small fish wedge themselves into tiny crevices by erecting sharp spines that line their fins. Those same spines are typically poisonous and can inject an enemy with a painful or even lethal dose of venom if needed.
Fish congregate together for social reasons, successful foraging and protection from predators. An unstructured aggregation of fish can consist of multiple species randomly collected near a local resource, such as food or a nesting site. A group of fish that stay together for social reasons is said to be in a school. Although the fish in schools swim independently of each other and can face in any direction, they remain close to each other and form a social group. When a group of fish in a school becomes more organized and synchronizes to swim together in the same direction and at the same speed in a coordinated way, they are said to be groping. Schooling fish are generally of the same species, age and size. A school moves with fish equidistant and can undertake complicated maneuvers, as if the school itself were a discrete organism with its own mind.
As for the birds, although the list of those found in Dry Tortugas National Park currently contains 299 species, the area offers a long-term habitat for a few birds. Less than 40 species are typically found in winter and only 7 species nest in the area regularly. Most species are transient or stray, present only briefly during spring and autumn migrations.
Northbound migrants arrive as early as mid-February. Spring migration increases dramatically during March and peaks from April to mid-May, with over 200 species traversing the area. The highest concentrations are typically observed during the worst weather conditions, when strong winds, rain and low temperatures generate the greatest number and diversity of migrants.