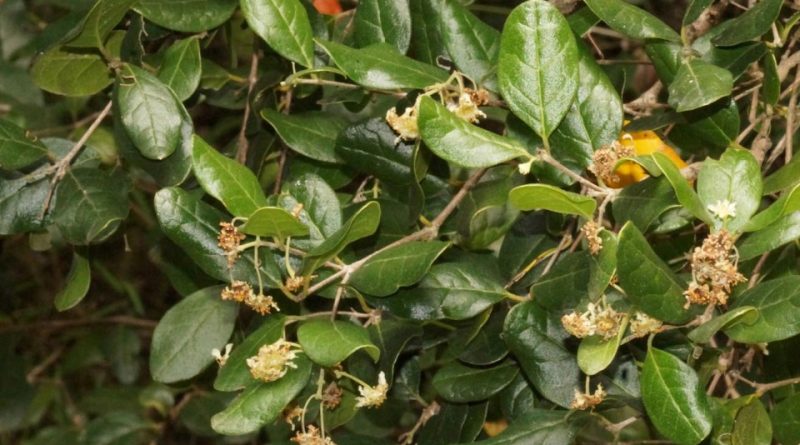 The boldo (Peumus boldus Molina) is an evergreen tree species belonging to the Monimiaceae family.

Etymology –
The term Peumus comes from “peumo”, a name that almost certainly derives from the indigenous Mapuche language of Chile.
The specific epithet boldus is in homage to the Spanish botanist Boldo.

Geographic Distribution and Habitat –
Boldo is a plant native to central and southern Chile from where it spread to many other areas of the South American continent and was also introduced in Europe and North Africa.
Its natural habitat is that of dry and sunny slopes in slightly wooded vegetation systems. 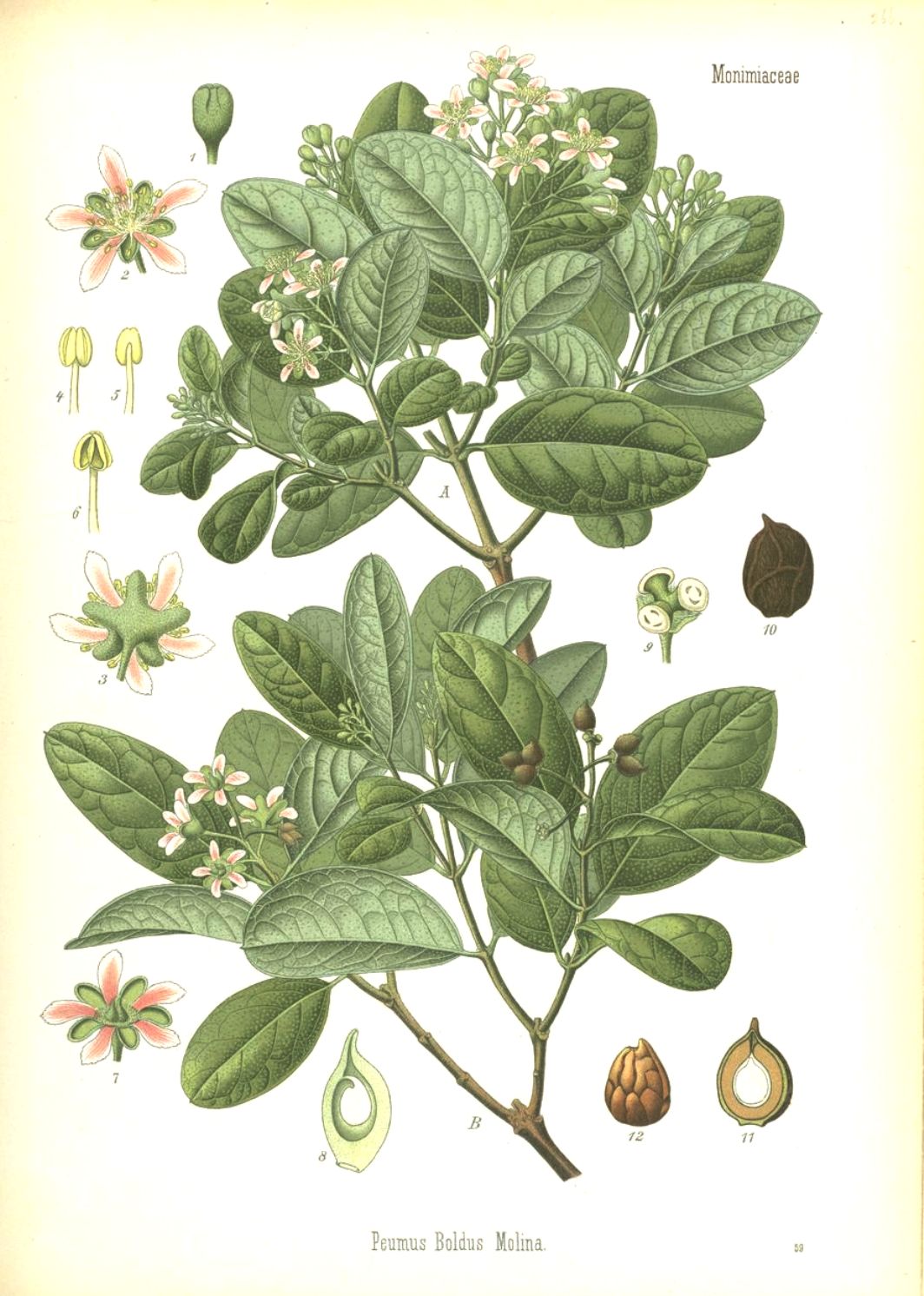 Description –
Peumus boldus is a small tree with a rounded habit, ranging from 3 to 5 meters in height, with slow growth.
The bark is gray in color and comes off in small rounded plates.
The young twigs are slightly pubescent, covered with fine and short hair.
The leaves are persistent, opposite, whole, oval and leathery. The upper part is rough to the touch, the upper part is dark green and the lower part is light and gives it a silver appearance. The leaves have a strong aromatic smell.
The flowers are united in groups of 5 to 12, white-yellow in color, with the petals joined together. Male and female flowers grow on distinct plants.
The fruits, up to 2 cm in diameter, are fleshy and edible, sweet and aromatic.
The antesis is in the period from December to the end of winter (February).

Cultivation –
Peumus boldus is a plant that can grow on rocky and shallow soils but its growth is favored in deep and fertile soils. It is a relatively hardy plant, which tolerates frost down to -10 ° C. It needs rainfall in the order of 400 to 800 mm / year and exposure in full sun and half-shade. However, this species also resists drought very well.
It is a slow growing plant.
Propagation can take place by seed with sowing in seedbeds and transplanting in late spring. In cold areas it is recommended to give young plants winter protection for the first two to three years.
It can also be propagated by cuttings of semi-mature wood, in the period of July-August.
Plants obtained from cuttings should also be protected in the first phase of development in areas with cold winters.

Customs and Traditions –
Peumus boldus is the only known species of the Peumus genus and is an important traditional medicine in its native area, where it is harvested in the wild, the plant is becoming increasingly popular in Western herbal medicine.
It is a traditional remedy used by the Araucan Indians of Chile as a tonic. The plant stimulates liver activity and bile flow and is mainly appreciated as a remedy for gallstones and pain in the liver or gallbladder.
As a medicinal herb it is considered a cholagogue, designed to facilitate biliary production, for the same reason it has a mild laxative function; it is also used as an antiemetic and component for digestive liqueurs. The drug is contained in the leaves and contains an essential oil consisting of: monoterpenes, flavonoids and alkaloids (the main one is boldin). In Chile it is often used with yerba mate to mitigate its strong flavor. Also in Chile, many years ago, scholars noticed that the goats that ate on its leaves did not suffer from liver disease; various studies were developed in this regard which came to the conclusion that it could be used successfully in liver diseases.
The leaves are analgesic, antiseptic (urinary), bitter, cholagogue, diuretic, stimulant and tonic. The leaves are used in medicine: they are part of the preparation of boldoflorine.
It is often combined with other herbs such as Berberis vulgaris or Chionanthus virginicus to treat gallstones.
The plant is considered a valuable cure for gonorrhea in South America.
The plant is taken internally in the treatment of liver disease (although the bark is most effective here), gallstones, urinary tract infections, intestinal parasites and rheumatism.
It has been used in the past as a substitute for quinine in the treatment of malaria.
A volatile oil is also obtained from the plant which destroys internal parasites.
The alkaloids contained in the cortex are a stimulant for the liver. Contains various substances useful for therapeutic uses including: tannins, dyes and an essential oil.
The bark is a source of tannin and is also used as a dye.
A deliciously scented essential oil is obtained from the leaves.
The dried and pulverized leaves are scattered among the clothes to perfume them and repel insects.
The small fruits are dried and used as beads in necklaces.
Furthermore, when heated slightly, they release the scent of cinnamon.
Its hard wood is used for making tools. The bark is used in the tanning and paint industries.
Wood is also used to make charcoal.
For food use, fruit can be eaten raw or cooked; it is sweet and aromatic and has a pleasant flavor.
The leaves and bark are used as a condiment.
All parts of the plant are sweetly aromatic and the leaves have a lemon and camphor aroma.
However, it should be remembered that some research conducted in 2009 suggests that the essential oils of the plant, also contained in the leaves, contain toxic alkaloids.
Finally, among other uses, this plant is used as an ornamental tree in areas of the Mediterranean regions where it can be appreciated for its rarity, for the designs of its bark and for the aromaticity of its leaves.

Preparation Method –
Peumus boldus leaves are harvested during the growing season and dried for later use
The methods of preparation are various, including the infusion, the tincture, and above all the decoction to be combined with other plants such as milk thistle, nettle and flue.
The leaves have a strong woody aroma and are used, in South America, to prepare infusions, especially in Chile, Paraguay, Argentina and Uruguay it is used as a herb for tea.
It is normally taken for only a few weeks at a time, either as an infusion or as a tincture.
For food use, fruit can be eaten raw or cooked.
The leaves and bark are used as a condiment.
Some caution is advised, the plant should not be used by pregnant women.