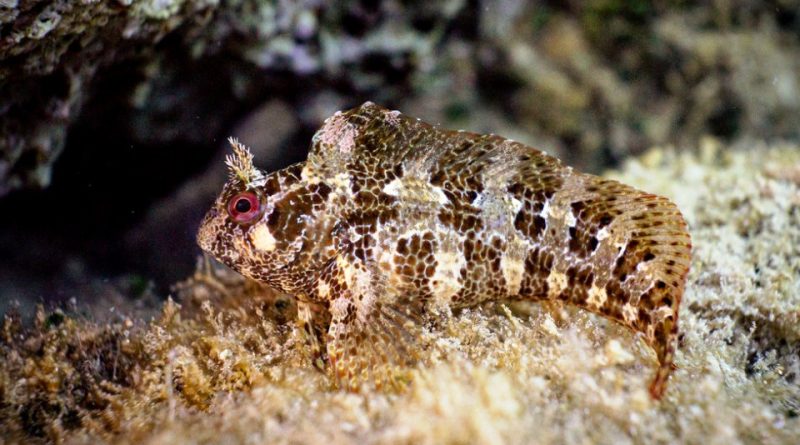 Geographic Distribution and Habitat –
Parablennius gattorugine is a species found in the northeastern Atlantic Ocean found in shallow coastal waters off Western Europe, the Mediterranean and North Africa.
The species is widespread in the western Mediterranean Sea where it is also common in the Italian seas, in the Sea of ​​Marmara (but not in the Black Sea) and in the eastern Atlantic Ocean from Ireland to Morocco.
Its habitat is that of rocky bottoms, crevices and hiding places at depths high enough for a blennid, between 3 and 40 m.
These fish can be found above the low tide mark at very low tides, sheltered under boulders or among exposed vegetation. 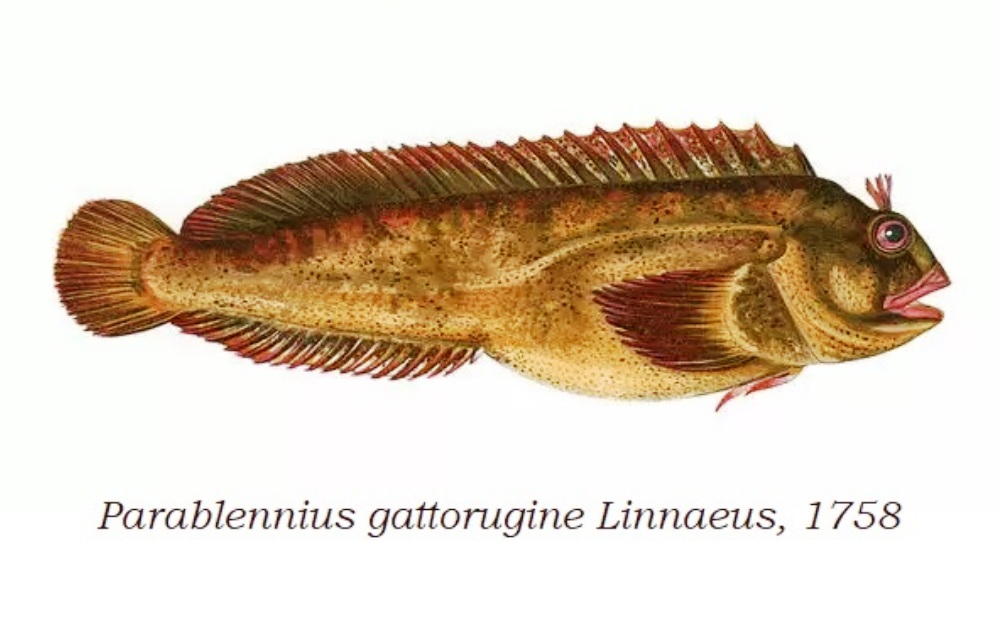 Description –
The Parablennius gattorugine is recognized by its characteristic shape of the fish of this family, with the camouflage color which, during the laying of the eggs, turns to chocolate for the males. The color varies between dark yellow and coffee brown, with dark vertical bands, often with a very thin light border, which continue on the dorsal fin, which has no median incision. It often has a reticulated appearance due to a lattice of very light thin lines superimposed on the main design.
It has a size of 17.5 cm, although a capture of 30 cm has been described.
It has tentacles in the nostrils and above the eyes; there are no canine teeth in the upper jaw
The head is large and the lips showy. It can exceptionally reach 30 cm in length.

Biology –
The Parablennius gattorugine is a species that reproduces in spring.
When they reproduce, males develop pale cauliflower-like glands on their anal fins which are believed to play a role in attracting females and cleaning the eggs.
The eggs are laid from March to May after the males mate with a number of females. The eggs are demersal and like those of all blennies they attach themselves to the substrate through a filamentous adhesive patch.
The eggs are then looked at by the male.
In this period, in fact, the males guard and defend the hiding place where several females have laid their eggs; it is the male, in fact, who takes care of the eggs until they hatch when they turn into planktonic larvae.

Ecological Role –
The tompot blenny has sharp comb-like teeth that it uses to scrape food off the substrate. It feeds on sea anemones and other invertebrates such as shrimp and other crustaceans.
It is a crepuscular fish, being active mainly at sunrise and sunset.
Like most fish, the Parablennius gattorugine hosts several species of parasites, including the capillary Nematode Pseudocapillaria bainae. This parasite was found in the intestines of specimens captured off the coast of Italy and Montenegro. Its biology is unknown.
Parablennius gattorugine has little commercial interest, although it can be used in saltwater aquariums.